Will evangelicals be Ben Carson’s salvation? 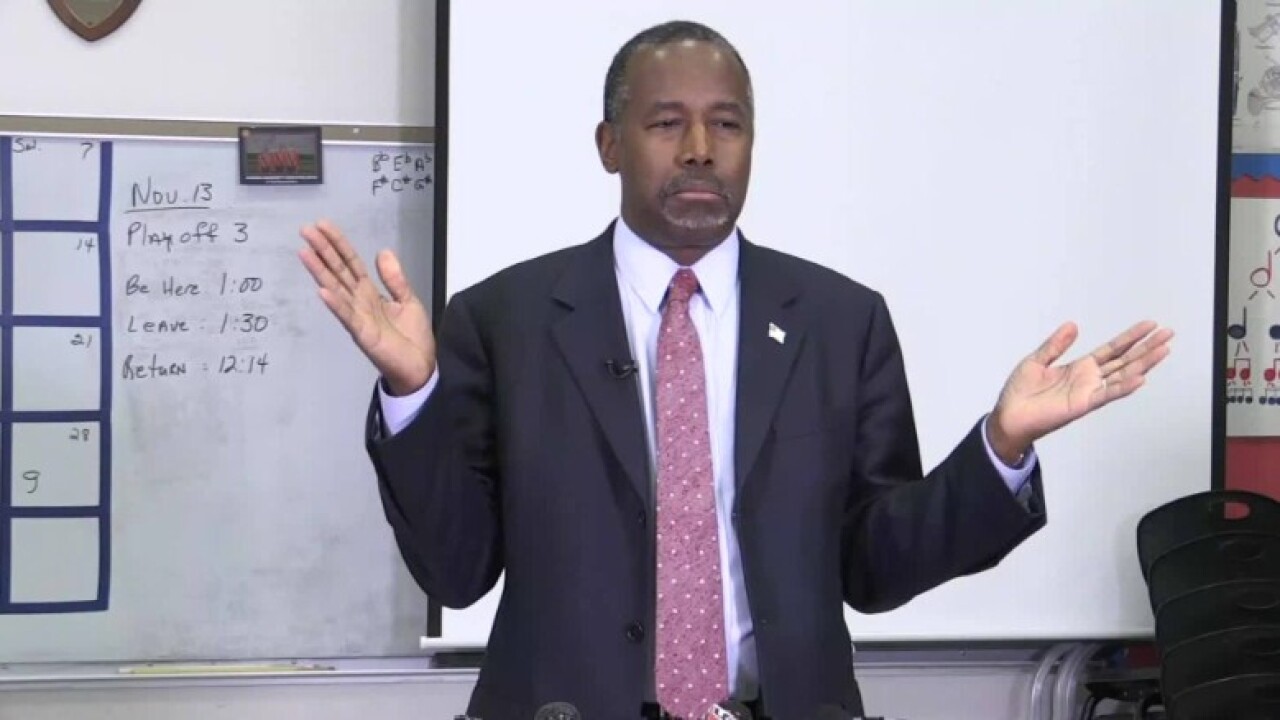 Attached. That is one way to describe some of Ben Carson’s most ardent supporters. They have filled auditoriums in key states, stood in line to get him to sign books, and they have embraced his personal story as proof of God’s power to transform and to uplift.

At a recent event at Bob Jones University in South Carolina, when Sen. Tim Scott asked the crowd of 5,000 if they knew biographical details about Carson — that he separated conjoined twins and won the Medal of Freedom — almost everyone raised their hand. His ride atop national polls and in early states has been built largely on evangelicals, a group that first knew Carson as a pediatric neurosurgeon but now see him as a president.

“He’s the one. Very principled. Definitely also Biblical values, I do feel God is the answer to our nation,” said Annie Abraham, 50, who attended a recent Carson event in Las Vegas. “He is not diplomatic. He says it like it is.”

According to a new Quinnipiac poll, Carson has slipped to third place in Iowa, down a whopping 10 points since last month. He now gets 18%, behind billionaire businessman Donald Trump and Texas Sen. Ted Cruz, who get 25% and 23% respectively. His overall Iowa slump coincides with the hit he is taking among evangelicals. In October, 36% of evangelicals supported him; now 24% do, according to the Quinnipiac survey.

The decline comes as Carson has faced weeks of scrutiny over his biography, his grasp of foreign policy in the wake of the Paris attacks and as front-runner Trump has unleashed a line of withering attacks on a man he once called a friend.

His plunge in the polls brings to mind Wisconsin Gov. Scott Walker, who started strong in Iowa before seeing a 15-point dip in his poll numbers over two months and then becoming one of the first GOP contenders to drop out, conceding that it is often hard to regain lost momentum.

Carson’s most fervent supporters still speak about him with a kind of intimacy and familiarity that can’t easily be eroded, but is also hard to replicate.

“Do you know what his middle name is? It’s Solomon. In the Bible, Solomon had a chance to ask God for anything and he asked God for wisdom,” said Jackie Brown of Indian Trail, North Carolina, who has followed Carson for 20 years. “He was smart enough to know that he needed wisdom, and I think Ben Carson is the same kind of man.”

Always a long-shot candidate, Carson now faces a surging Cruz. If Carson is the anti-Trump in terms of his demeanor, Cruz has managed to be a combination of Carson and Trump — he is fiery as well as a man of deep faith.

The Texas senator has staked his bid on Iowa and the “SEC primary,” when roughly a dozen Southern states will cast ballots on March 1. But before that, Cruz and Carson will battle it out in South Carolina on February 20.

A husband and wife at the Bob Jones University event illustrated the considerations that many conservative evangelicals are weighing as they make up their minds.

Sandy Powell spoke warmly of Carson: “Even if he doesn’t have all the experience, if he has the demeanor and surrounds himself with the proper people, he can do anything.”

But her husband might make a different choice, even though Carson appeals to him, too.

“I like Carson. I like a lot about Carson. He’s a good human being. I think he would be good also,” said John Powell. “But he doesn’t seem to have the fire in the belly that Cruz has. That’s kind of the difference: the temperament.”