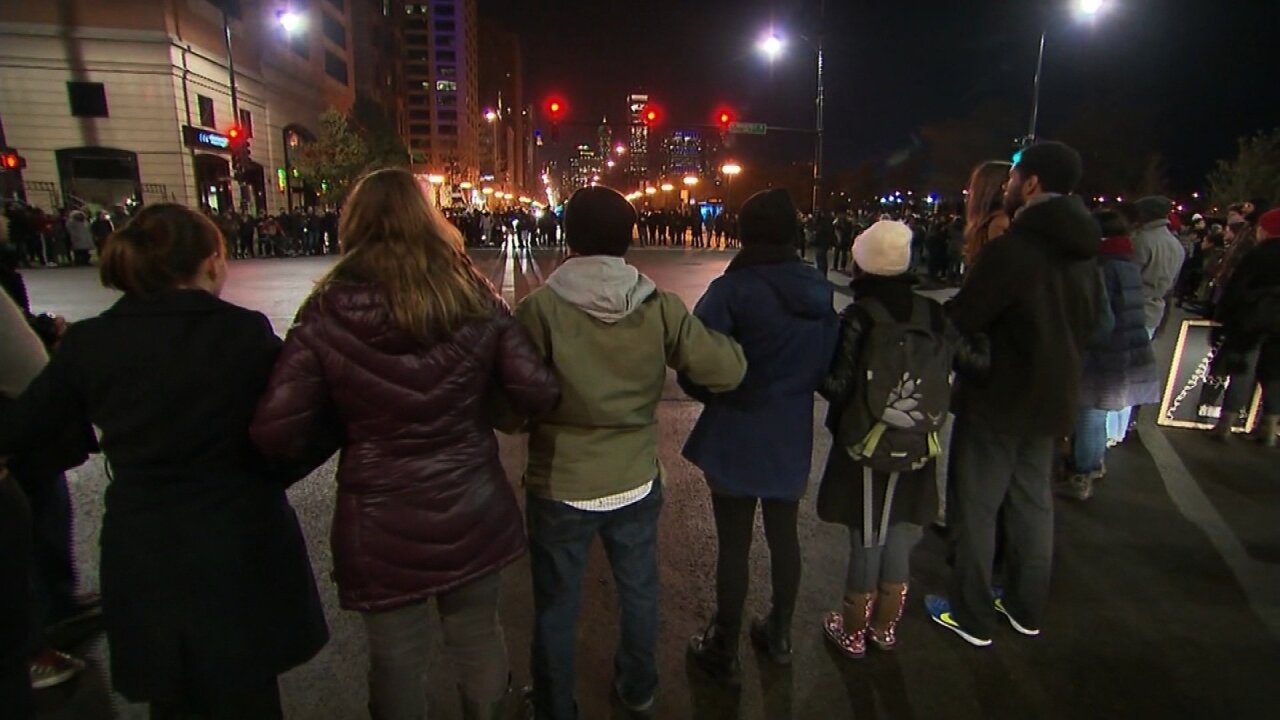 Chicago continued its steady boil on Friday as protesters marched on its luxury corridor during a major shopping holiday and pressed their outrage over an officer’s killing of teenager Laquan McDonald.

Threatening to dent Michigan Avenue’s economy, demonstrators used Black Friday’s prominence to highlight their demands for the resignation of the police commissioner and for a federal investigation into his department.

Protesters marched on the elegant thoroughfare called Chicago’s “Magnificent Mile,” which leads to the city’s Gold Coast neighborhood. They paralyzed street traffic and chanted “16 shots! 16 shots!” which was the number of times McDonald was shot by police.

Energizing the ongoing protests are a growing number of black community leaders and groups, including the black caucus of the City Council that says it will seek a vote of no confidence against Police Superintendent Garry McCarthy.

McCarthy has indicated to media outlets he doesn’t intend to resign, and he enjoys the support of Mayor Rahm Emanuel.

However, this week’s release of police dashcam video of the McDonald’s killing is becoming a political as well policing controversy.

The video shows McDonald, 17, being shot on a city street last year by Officer Jason Van Dyke, who this week was charged with first-degree murder. Even President Barack Obama said he was “deeply disturbed” by the footage.

Local NAACP chapters joined the call for a federal investigation into the Police Department, CNN affiliate WGN said. Rev. Jesse Jackson said he met with U.S. Reps. Bobby Rush and Danny Davis, as well as activists, and they, too, sought a U.S. Justice Department inquiry into Police Department’s handling of the McDonald shooting, according to the Chicago Tribune.

Jackson is also demanding changes to the police chain of command.

“The police leadership has to change as well as its infrastructure,” Jackson told CNN moments before Friday’s march began.

What continues to roil the black community is how police and Cook County State’s Attorney Anita Alvarez waited 400 days to release the tape, well after last spring’s election in which Mayor Emanuel faced stiff competition and had to undergo the first-ever runoff election in the city’s history, an eyebrow-raising moment for an incumbent in a city renowned for its “machine”-like politics.

“Who knew about the tape and who covered it up for 13 months,” Jackson said.

In the wake of the video’s release, protesters and community leaders want a U.S. Justice Department investigation similar to ones conducted into the police departments in Cleveland and Ferguson, Missouri, and one now being conducted in Baltimore.

“We believe CPD officers have engaged in the systemic use of excessive force and carried out a pattern of discriminatory harassment against African American residents in the city,” Chicago Urban League Interim President Shari Runner said in a statement. “Furthermore, they have been dishonest about those practices, in some cases even covering up illegal activity.

“It is imperative that the Department of Justice step in and correct this conduct before there is any more loss of life,” Runner said.

Protesters assembled Friday morning at Chicago’s historic Water Tower on Michigan Avenue, according to the website of the activist group Stop Mass Incarceration, which condemns racial profiling by police.

Jackson, who’s president of the Chicago-based Rainbow PUSH Coalition, noted how the city opposed the release of the video until a judge finally ordered its release under a reporter’s Freedom of Information Act request.

Jackson wants a special prosecutor in the McDonald case, he told CNN.

“The state’s attorney has no credibility,” Jackson said. “This was strategically covered up.”

Public access to government records has generated headlines in the nation’s third-biggest city.

In September, the Chicago Tribune filed a lawsuit alleging that the mayor violated state open records laws by refusing to release communications about city business conducted through private emails and text messages. The newspaper accused the mayor’s office of “a pattern of noncompliance, partial compliance, delay and obfuscation” in handling the public’s requests to see records.

Emanuel said his office always complies and works through all information requests “in the most responsive way possible,” the newspaper reported.

Regarding the 400-day delay in releasing the video of McDonald’s shootings, Jackson wrote on his group’s website that city officials “sat on the tape for more than a year, buried the killing in an unending investigation, gave the officer a pass, and got through the elections.”

In fact, just hours before the video’s release this week, prosecutor Alvarez filed a first-degree murder against Officer Dyke, who fired 16 shots in about 15 seconds at McDonald.

Van Dyke’s attorney, Daniel Herbert, said his client feared for his life in his encounter with McDonald, who was armed with a knife, and that the one video doesn’t tell the full story of events leading up to the shooting.