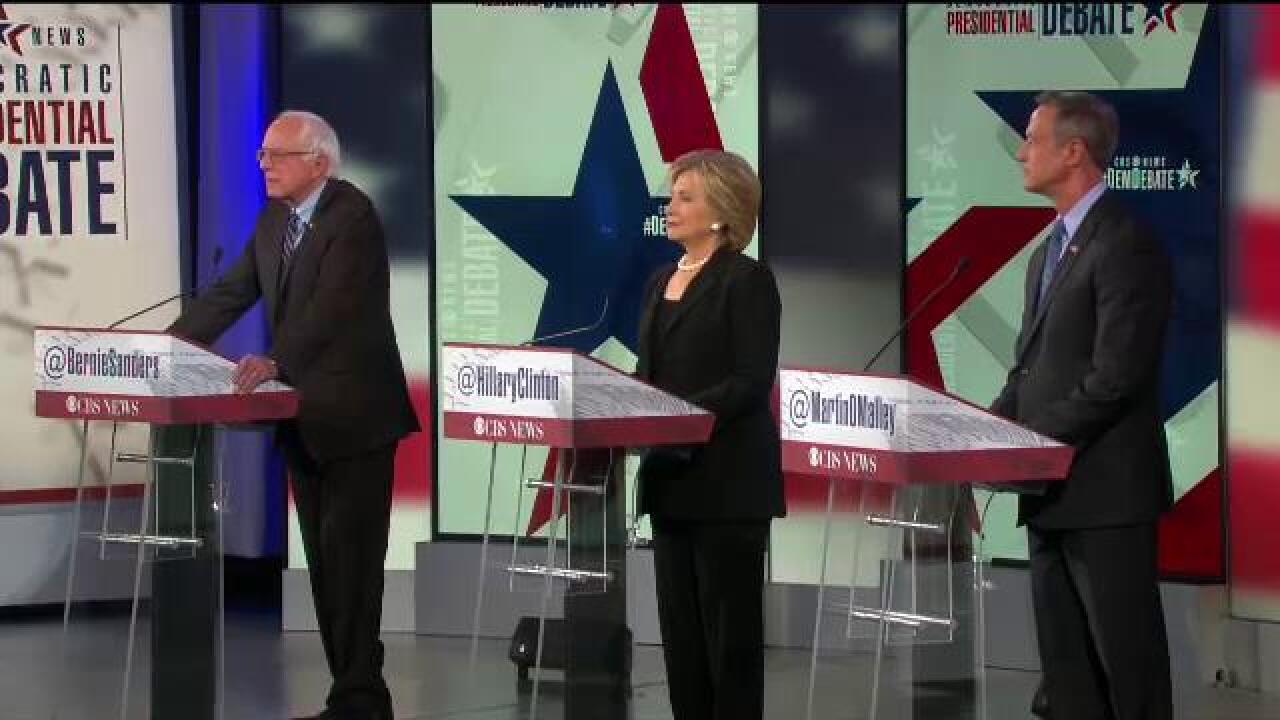 In direct contrast with President Barack Obama, Hillary Clinton said Saturday that ISIS “cannot be contained” but instead must be “defeated.”

Her comments at the second Democratic presidential debate of the campaign season came a day after a series of terror attacks — for which ISIS claimed responsibility — took more than 100 lives in Paris. On Thursday, before the terrorist strike, Obama said ISIS was “contained.”

Clinton sought to balance her response to the attacks against her ties to the Obama administration, which is under fire for its response to ISIS.

“What the president has consistently said, which I agree with, is that we will support those who will take that fight to ISIS,” she said.

Three Democratic presidential candidates gathered in Des Moines, Iowa, for a debate that has been jolted by the terrorist attacks across Paris that the French President has declared an “act of war.” The gunfire and explosions moved national security issues to center stage in a Democratic primary that has so far largely focused on progressive issues such as income inequality and controversies like Clinton’s use of private email during her tenure as secretary of state.

Both of Clinton’s rivals, Bernie Sanders and Martin O’Malley, seized on the foreign policy discussion to quickly criticize Clinton for her vote in support of the Iraq War when she was in the Senate.

“I would argue that the disastrous invasion of Iraq, something that I strongly opposed, has unraveled the region completely and led to the rise of al Qaeda and to ISIS,” Sanders said.

O’Malley argued that the problem wasn’t simply limited to Clinton’s vote for the Iraq invasion, pointing to “cascading effects” that followed.

“We need to be much more far-thinking in this new 21st-century era of nation-state failures and conflict. It’s not just about getting rid of a single dictator,” he said.

As soon as the debate began, it became clear that Clinton’s views on foreign policy, honed during her time as the Obama administration’s top diplomat, would be a major part of the discussion. The relative inexperience of her rivals — Sanders and O’Malley — was also tested.

The Democratic candidates contrasted themselves against their Republican counterparts on the issue of the refugee crisis in the Middle East. Though many GOP presidential candidates have said the U.S. shouldn’t accept refugees into the country, the Democrats argued that it’s America’s responsibility to accept those fleeing violence in countries like Afghanistan and Syria with proper screening.

Calling for “as careful a screening and vetting process as we can imagine,” Clinton, who has previously stated the U.S. should accept as many as 65,000 new refugees, said, “I do not want us to in any way inadvertently allow people who wish us harm to come into our country.”

Sanders said he didn’t want to state a “magic number,” but that it was the United States’ “moral responsibility” to accept refugees in conjunction with its allies in Europe and the Middle East.

O’Malley also said the country should accept as many as 65,000 refugees.

In one part of the debate that Republicans are certain to seize on, no Democratic candidate used the term “radical Islam” to describe terrorists. This phrase is preferred by Republicans, who have accused Democrats of shying away from a forthright description of ISIS.

Though much of the debate focused on national security, Clinton sparred with her rivals on hot-button domestic issues like financial regulatory reform and gun control.

Progressives and Wall Street reform advocates have consistently hit Clinton for her perceived closeness with Wall Street, particularly as she’s raised large sums of money from wealthy donors in the financial industry.

“I’ve laid out a very aggressive plan to rein in Wall Street,” Clinton said, touting a plan that she said not only targets the big banks, but the shadow banking industry as well.

Asked to react to Clinton’s answer, Sanders shot back: “Not good enough.”

The Vermont senator said he was the only candidate on stage who did not have a super PAC, vowed to break up the big banks, and said voters understand that any candidate who accepts contributions from special interests are influenced by them. “Everybody knows that,” he said.

O’Malley also hit Clinton for not backing the reinstatement of Glass-Steagall, the Depression-era law that split commercial and investment banking.

“I won’t be taking my orders from Wall Street,” he said.

Later in the debate, Clinton went after Sanders for supporting a measure that she said gave immunity to gun makers and sellers, labeling it a “terrible mistake.”

Sanders pushed back, saying he has voted repeatedly for background checks.

The issue of Clinton’s use of a private email server during her time at the State Department also surfaced, but briefly.

As he did in the first Democratic debate, Sanders again said he was “sick and tired” of discussing the controversy, and that he would prefer that the media focus on “why the middle class is disappearing.”

Letting out a laugh, Clinton said, “I agree completely. I couldn’t have said it better myself.”

Asked whether Democrats can feel confident that no other shoe will drop, Clinton responded, “I think after 11 hours, that’s pretty clear” — a reference to her day-long testimony on Capitol Hill where she largely avoided fresh, negative headlines.

A lot has changed since Clinton, Sanders and O’Malley met for their first showdown in Las Vegas last month.

There were five candidates on stage at the time. Since then, two have dropped out.

Last month, the possibility of Joe Biden jumping into the race and upending the party’s nomination process loomed large — now, the country knows that the vice president will not pursue another White House bid.

And Clinton, the party’s frontrunner, has had plenty of fresh momentum heading into the debate.

After a strong first debate performance, her poll numbers have ticked up and she’s widened her lead over Sanders. She now also has the Benghazi hearing behind her — a day-long affair on Capitol Hill where she largely managed to avoid fresh, negative headlines.

Scroll down for a list of tweets from the event in Iowa.