Arrests made in connection to Paris terror attack 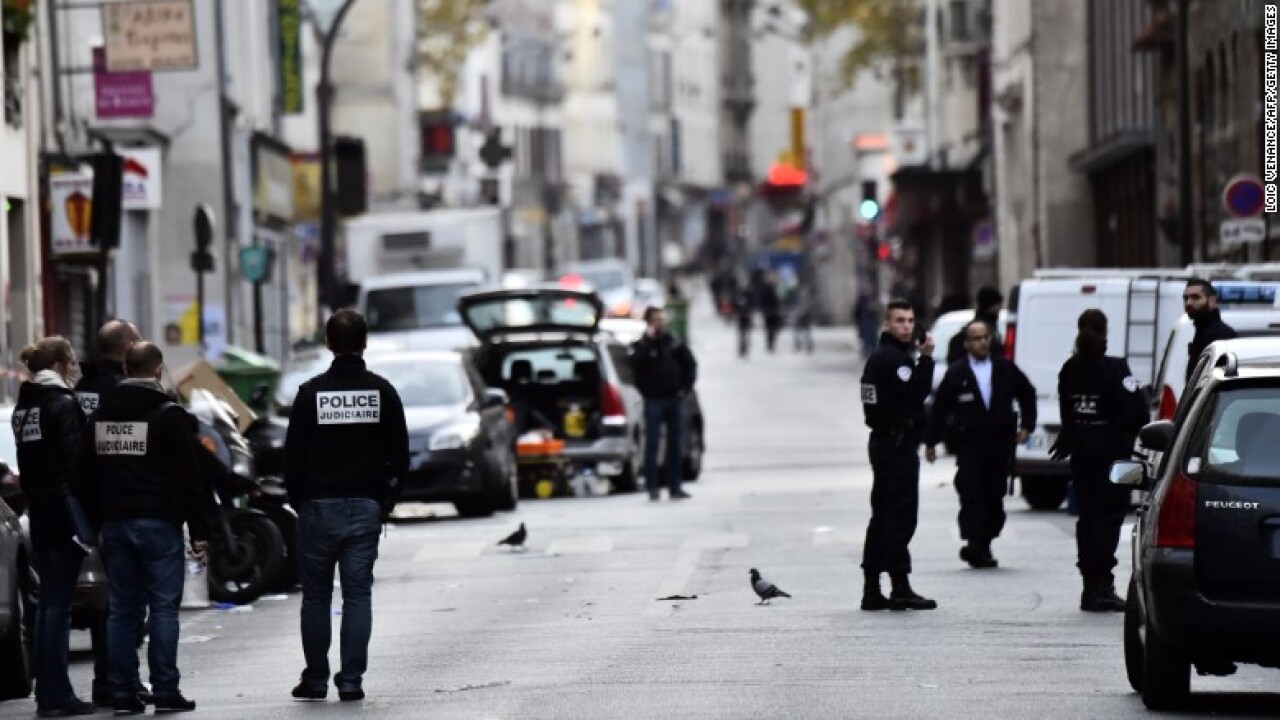 PARIS — A number of arrests have been made in Belgium during police raids in connection to Friday’s attacks in France, a Belgian justice ministry spokeswoman told CNN Saturday. The raids were conducted in Molenbeek, on the outskirts of Brussels, justice ministry spokeswoman Sieghild Lacoere said. Lacoere also told CNN that a car rented in Brussels was found near one of the sites of the attacks in France and “that’s what triggered the raids.”

ISIS has claimed responsibility for the worst violence witnessed in France since World War II, a volley of nearly simultaneous terror attacks that the French President called “an act of war.”

Meanwhile, investigators’ response expanded beyond France as Belgian authorities conducted raids in a Brussels suburb, including one connected to the Paris attacks, a Western intelligence source told CNN on Saturday.

In the Paris attacks on Friday night, the assailants targeted six sites, the deadliest being a massacre at a concert hall where at least 80 people were killed.

In all, French authorities put the number of dead at 128, though the death toll is expected to fluctuate as the situation becomes clearer.

The threat of ISIS is well-known, with the jihadist group’s atrocities in Syria and Iraq being met with condemnation and airstrikes by a U.S.-led coalition that includes France.

But the scale and apparent coordination of Friday’s attacks inside the European Union, which comes on the heels of ISIS’ claim of taking down a Russian airliner in Egypt, represent an escalation of capabilities if confirmed.

A Syrian passport was found near the body of an attacker outside one of the targeted sites, the Stade de France, according to a police source, CNN affiliate France 2 and other French media reported.

A source close to the investigation told CNN that an Egyptian passport was found on another attacker. “There is strong assumption that these passports are fake,” the source said.

In addition to those killed, 180 others were injured, according to the Paris Police Prefecture. More than half of them are in critical condition.

At least two Americans were injured and the number is expected to go up, a U.S. official told CNN.

President Francois Hollande blamed the attacks on ISIS, calling it “an act of war” by the militants. He said it was planned from the outside — “with inside complicity.”

“When the terrorists are capable of doing such acts, they must know that they will face a France very determined,” he said.

Response in wake of attacks

Hollande issued a state of emergency as the attacks unfolded Friday.

On Saturday, French Interior Minister Bernard Cazeneuve elaborated that the state of emergency could mean restrictions on people’s movements, among other measures. Border controls were tightened as of Friday, and the gendarmerie paramilitary police are on heightened alert, he said.

France has beefed up security forces at public transportation hubs, on the main roads and highways as well as everywhere in the center of Paris, Cazeneuve said following a meeting with Hollande.

While ISIS claims have not been confirmed, a senior U.S. intelligence official told CNN the U.S. government has “no reason to doubt” Hollande’s attribution of the attacks to the terrorist group.

The coordination and sophistication of such attacks are the most recent evidence that ISIS is eclipsing al Qaeda as the most significant global terrorist threat.

The “scale and complexity” of the Paris attacks “surprised everyone,” said Peter Neumann, director of the International Centre for the Study of Radicalisation at King’s College London.

Terror experts had been expecting some kind of attack but did not think ISIS capable of carrying off something on the scale of Friday’s terror, he said.

One of the attackers has been identified by fingerprints as a French national known to police, a source close to the investigation of the attacks told CNN.

Airports in France remained open, and airlines were still flying there, though some airlines reported canceled flights.

Some airlines were offering refunds to passengers who decide they do not want to fly to Paris.

Gunmen hit Friday night when bars and restaurants were bustling with residents and tourists. When they stormed in, glass shattered under the rage of bullets. Excited weekend chatter turned into panicked screams.

One of the targets was near a soccer match as France played world champion Germany. Terrified fans huddled together and streamed onto the field after blasts went off. Others hugged.

At the Bataclan, a concert hall where most of the fatalities occurred, fans were listening to American rock band Eagles of Death Metal when the blasts started.

“People yelled, screamed,” said Julien Pearce, a radio reporter who was there. “It lasted for 10 minutes. Ten horrific minutes where everybody was on the floor covering their head.”

Eight terrorists are dead following the attacks on six locations in Paris and nearby areas, prosecutor’s spokeswoman Agnès Thibault-Lecuivre said.

The prosecutor’s office said it cannot confirm whether all terrorists have been killed because it has not determined the total number of attackers.

Of the eight, seven died in suicide bombings, officials said.

The attackers targeted a concert hall, a stadium, restaurants and bars.

Most of the deaths were inside the Bataclan concert hall, where a witness said gunmen stormed in, firing rifles and shouting, “Allah akbar.” At least 80 people died in the attack there.

Earlier Friday, the Interior Ministry had put the death toll at the concert hall at more than 100.

Later, the Paris prosecutor said the number of dead at the hall was “around 80.” The death toll is expected to rise.

“We lay down on the floor not to get hurt. It was a huge panic,” Pearce said. “The terrorists shot at us for 10 to 15 minutes. It was a bloodbath.”

The gunmen seized hostages before French police stormed in and rescued dozens of people.

Michael Dorio, brother of Eagles of Death Metal drummer Julian Dorio, said he spoke to the musician after the attack.

Dorio said when his brother and his band mates heard the gunshots, they stopped playing, took off backstage and exited.

Charlotte Brehaut and a friend were dining at a Cambodian restaurant in Paris, she said.

“All of a sudden, we heard huge gunshots and glass coming through the windows,” she said. “We ducked with the other diners.”

Others were killed outside La Belle Epuipe bar in the 11th district.

“I heard an explosion and pop, pop, pop, which sounded like gunfire. I instinctively grabbed my phone and started filming out of the window.”

“The men were huddling around and there was no one on the street except them. They had long shotguns and seemed hysterical, screaming and not really sure what to do.

“They tried a few apartment doors, trying to get in but they were locked. In the end, they ran toward the river. I am not sure if they were police or the attackers.”

Some explosions hit near the Stade de France outside Paris, home of the national sports teams. Four people died in those attacks, authorities said.

One of the blasts appears to be a suicide bombing, a Western intelligence source told CNN.

Three suicide bombers died in the blasts. A dismembered body consistent with the aftermath of an explosion from that type of device was found at the scene, authorities said.

There has been an outpouring of support and solidarity in Paris, but large gatherings in the streets have not materialized in part because the state of emergency prohibits those.

But there’s more to it than those restrictions, Paris Deputy Mayor Patrick Klugman said.

“There is more sadness and probably more fear,” Klugman told CNN’s Christiane Amanpour. “We don’t know yet if this terror in fact is over or not. And, from time to time on social media, you have more reports — most (of it) false news — but it shows how worried” the population is.

In the aftermath of the attacks, Parisians helped each other out by using social media to invite those in need inside their homes.

The message spread and “all around here, people opened up the doors of their buildings of their flats to welcome people,” Klugman said.

President Barack Obama spoke to Hollande and offered him support and condolences. The FBI and the Department of Homeland Security are closely monitoring the situation, but there is no credible or specific threat in the United States, a U.S. government official said.

“The two leaders pledged to work together, and with nations around the world, to defeat the scourge of terrorism,” the White House said in a statement.

German Chancellor Angela Merkel said the attackers hate freedom, and vowed her nation will help lead the fight against terrorists.

Two attackers, who were brothers, said they wanted to punish the magazine for the publication of cartoons that they believed mocked the Prophet Mohammed. Two days later, the brothers were shot to death in a standoff with police in Dammartin-en-Goele.

Their associate attacked a Jewish grocery store in Paris, taking more than a dozen people hostage and killing four. Police stormed the kosher market and killed him.

Hollande declared a state of emergency following the attack Friday and said border security has been ramped up.

Although the country has been wounded, “France always rises up again,” he said Saturday in the wake of the attacks.