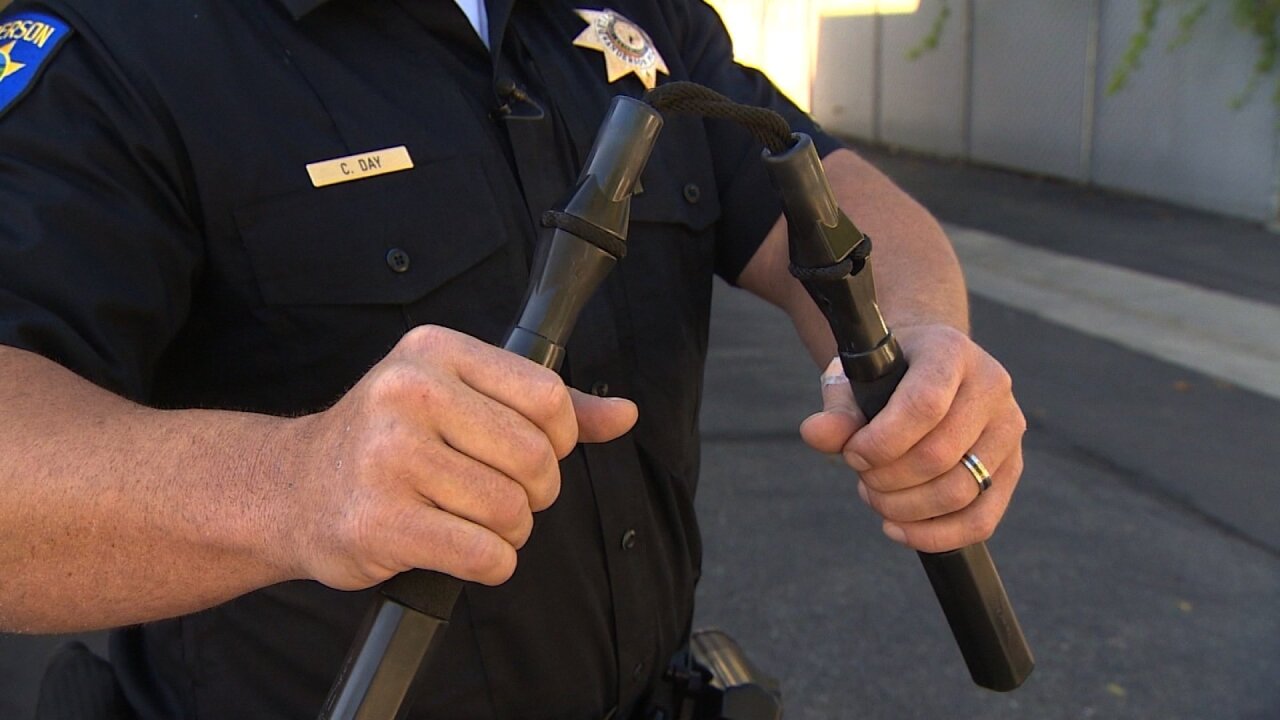 As police face scrutiny and controversy nationwide over the use of force, a small department in northern California is resurrecting a weapon to more safely subdue suspects that once was popularized in Bruce Lee movies: nunchucks. No, Anderson police officers won’t be, like Lee, swinging the nunchucks as a striking weapon, though that’s a possibility. Rather, the officers will most often use the nunchucks as a clamping device to pinch the leg or wrist of a defiant suspect. The intense pain will prompt the suspect to surrender to an arresting officer.

ANDERSON, Calif. — As police face scrutiny and controversy nationwide over the use of force, a small department in northern California is resurrecting a weapon to more safely subdue suspects that once was popularized in Bruce Lee movies: nunchucks.

No, Anderson police officers won’t be, like Lee, swinging the nunchucks as a striking weapon, though that’s a possibility.

Rather, the officers will most often use the nunchucks as a clamping device to pinch the leg or wrist of a defiant suspect. The intense pain will prompt the suspect to surrender to an arresting officer.

The weapon, two sticks with a short tether, give police a nonlethal alternative in confrontations that require force. While civilian nunchucks are illegal in California, police can opt to use them.

“A lot of people have this perception that it’s this ninja tool that is equivalent to a deadly weapon which is used to strike and fight and create an aggressive tone, so that’s why some (police departments) stay away from it,” Anderson Police Chief Michael Johnson said.

But nunchucks, (sometimes referred to as nunchaku), were once used by as many as 200 police departments nationwide in the 1980s and 1990s to “more compassionately” and “more safely” control suspects, limiting injuries to both officers and those apprehended, according to Johnson and experts.

“Its primary use is not a striking tool. It’s more a grappling tool. You’ll see it’s used like chop sticks: It’s used to apply pain,” Johnson said. “Pain compliance is basically what it is.”

By 2000, police nunchucks began to lose their limited favor with the introduction of the Taser, a type of stun gun that uses tethered projectiles and an electrical jolt to send an unruly suspect to the ground.

Also, some police agencies dropped nunchucks after significant injuries such as broken wrists were reported, said Greg Mayer, a retired Los Angeles police captain who’s now an expert on use of force.

“Any use of force might cause injury to suspects or officers,” Mayer said. “The challenge is to find and adopt equipment and tactics that get the job done, but cause the fewest and least severe injuries to suspects and officers.”

But national controversies over deadly force led Johnson to consider nunchucks as an alternative.

The pair of sticks are connected by about 3 inches of nylon cord.

“With the strained relationship between society and law enforcement currently that we are seeing on a day to day basis and looking at the potential litigious matters that could be ahead for us having to use force, I thought what’s a better way to give another option to the officers to maybe subdue a suspect, which limits injuries to both. The nunchaku is that tool,” Johnson said.

At first, some officers in the 20-member Anderson police force looked askance at the weapon that conjures up an image of a bare-chested Bruce Lee expertly flailing the nunchucks with fearsome speed.

“I was skeptical,” Sgt. Casey Day said. “I had no experience with the nunchucks myself. I quickly started researching the tool and agreed to attend the instructor training.”

Now a nunchucks instructor for his department, Day calls the weapon a “great” tool because it’s versatile as a control or impact weapon.

Unlike a police baton, the nunchucks allow officers to manually vary the amount of force applied and use only what’s necessary, Day said.

“In the end, I was sold. To me, it seems like they have a very real world place for being effective with police officers today dealing with passive and actively resisting suspects,” Day said.

About 100 police departments around the country use nunchucks, and in 95% of their usage, they’re deployed in control and restraint situations, Orcutt said. The remaining occasions are for striking, or impact, situations, he said.

“The nunchaku is a martial arts device or weapon that Bruce Lee demonstrated in many movies. That’s not what I’m teaching here. The impact techniques are extremely simple, as in any baton user would be able to master those techniques, and they don’t take long to teach,” Orcutt said.

“The remainder of the training is for the control applications, which the martial arts experts don’t teach because they’re not putting people in handcuffs,” said Orcutt, who has certified more than 800 nunchucks police instructors since 1984. Orcutt also holds a first-degree black belt in jukado and was inducted in the World Martial Arts Hall of Fame in 1997.

Orcutt believes the use of nunchucks could have prevented the death of Eric Garner, the unarmed African-American man who died last summer after a New York police officer put him in a choke hold.

Perhaps an officer could have more safely brought down Garner by squeezing the nunchucks’ two sticks over Garner’s ankle, Orcutt said.

“It would have ended the confrontation. Guaranteed,” Orcutt said.

Police use of nunchucks survived a federal court challenge in the early 1990s in San Diego where police used the weapon at a public demonstration against abortion, Orcutt said. A federal appeals court upheld the police use of the weapon as a legitimate force.

“I think what you’re seeing now is that there is a new generation in the law enforcement business taking a look at it,” Orcutt said.