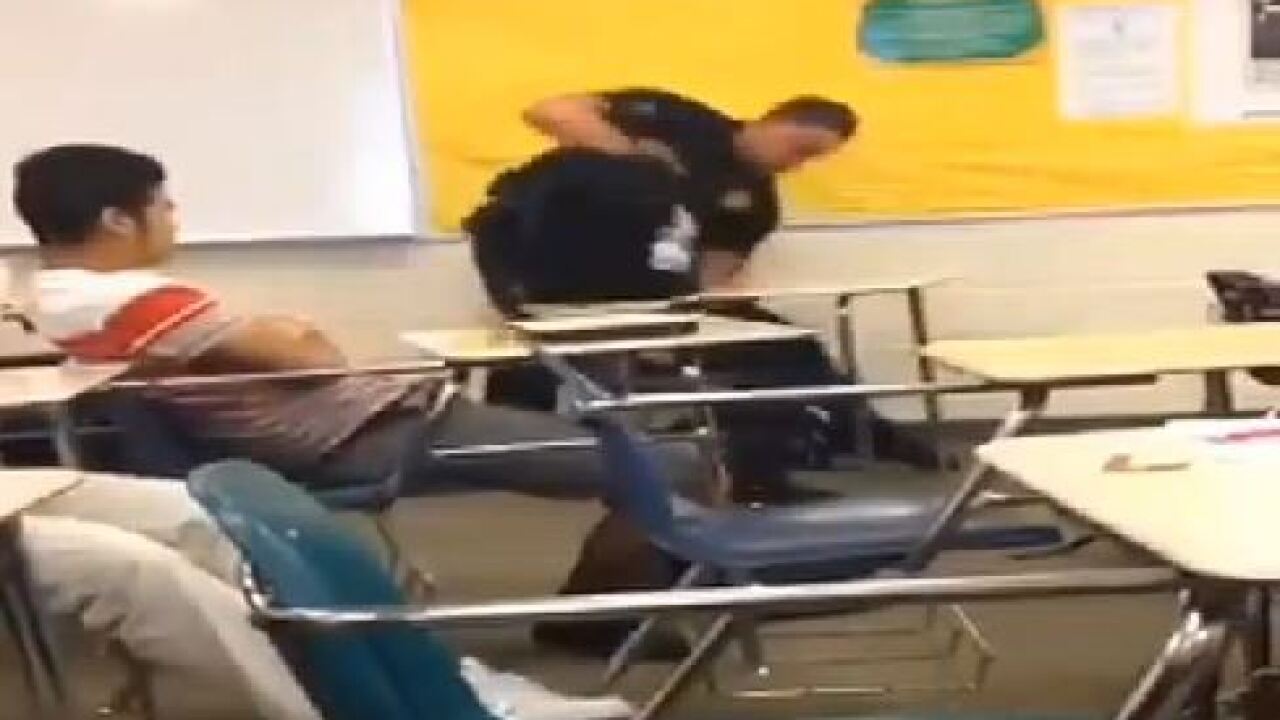 RICHLAND COUNTY, Sc. — A video that captured an alleged confrontation between a school resource officer and a South Carolina high school student has sparked outrage from concerned parents and students, as well as online commenters.

The incident happened Monday at Spring Valley high school near Columbia, South Carolina, according to multiple reports. Richland County Sheriff Leon Lott, said the school resource officer was acting in response to a student who was refusing to leave class.

“The student was told she was under arrest for disturbing school and given instructions which she again refused,” Lott told WIS-TV. “The video then shows the student resisting and being arrested by the SRO.”

Richland County Sheriff Leon Lott, said the school resource officer was acting in response to a student who was refusing to leave class.

Lott told WLTX, that student was being disruptive and refused to leave after a teacher asked her. He said an administrator was called to the room, and also asked the student to leave, but she refused again. Finally, the school resource officer came to the room. Lott said the officer forcibly removed the student and she resisted arrest.

The video shows an officer grab the female student, flip the chair backwards, and drag her on the ground out of view from the camera. The officer then said, “Put your hands behind your back.”

Parents of students at Spring Valley reacted strongly to the video. A group calling themselves the Richland Two Black Parents Association called the video “egregious” and “unacceptable.”

“Parents are heartbroken as this is just another example of the intolerance that continues to be of issue in Richland School District Two particularly with families and children of color,” the statement said. “As we have stated in the past, we stand ready to work in collaboration to address these horrible acts of violence and inequities among our children”.

According to WLTX, Richland School District Two Superintendent Dr. Libby Roof said that the district was “deeply concerned” about the incident, and will not tolerate any actions that jeopardize the safety of students.

“Our District is deeply concerned about an incident that occurred at Spring Valley High School today. The incident took place between a school resource officer employed by the Richland County Sheriff’s Department and a student. Video of the incident is circulating on social media.

“Student safety is and always will be the District’s top priority. The District will not tolerate any actions that jeopardize the safety of our students.

“Upon learning of the incident, school and district administrators began an investigation. We are working closely and in full cooperation with the Richland County Sheriff’s Department to conduct a thorough and complete investigation.

“Pending the outcome of the investigation, the District has directed that the school resource officer not return to any school in the District.”