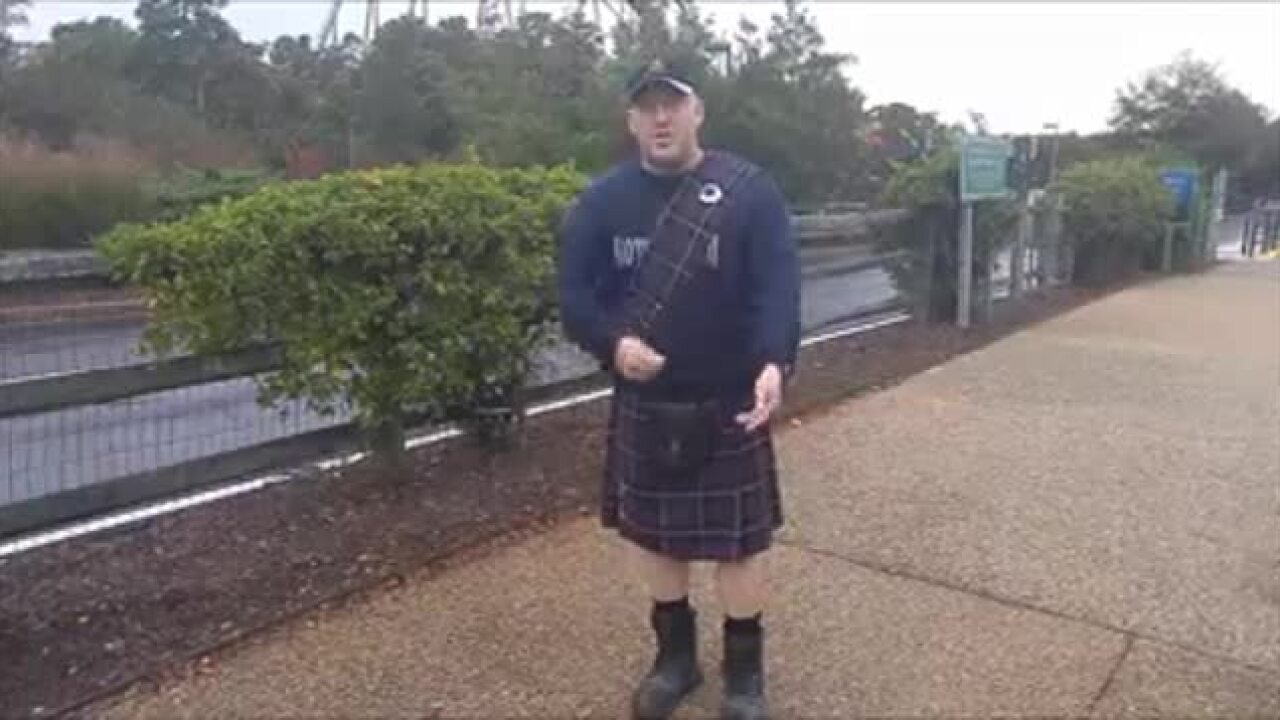 WILLIAMSBURG, Va. -- A Norfolk man said he was denied access into Busch Gardens Howl-O-Scream because he wanted to wear a traditional Scottish kilt into the theme park. Hex Nottingham called what happened to him Friday night an example of discrimination and said park security guards insulted his Scottish and Irish heritage.

"I love coming to this park, and I usually wear one of my kilts when I do so to proudly celebrate a heritage that Busch Gardens is largely based upon. I always get compliments here and there from the staff and fellow patrons and have never had a problem until this day," Nottingham posted on his Facebook page. "When walking up to the security check, I always ask if they need to check my sporran. That is the pouch the hangs on the front of a kilt. Sometimes they do, sometimes they do not. As I reached the officers on this day, two of them told me that I would not be allowed into the park 'with that on' and proceeded to refer to my plaid as a 'costume.'"

Nottingham said he and his family tried, in vain, to explain he was not wearing a costume, rather an article of clothing that represented his heritage, one, he said, he often wears to the grocery store.

"We asked what would happen if someone from a different cultural or spiritual background showed up wearing traditional and even sacred articles of clothing; a Muslim in a hijab or burka, a Sikh in a turban, a Hindu in a sari, etc. We were again told [they were not] going to 'stand here and argue with us,'" he said. "Once my fiance and I took the tram back to the Ireland parking lot, we were so shaken up by the atrocious insult we had just sustained that we didn't even want to come back to the park. I've been a customer for decades and a regular pass holder, and this has left a terrible stain on the honour of my culture as well as my ethnic pride. The people responsible should be ashamed and the administration should resolve this swiftly and competently."

"For the safety of our guests and performers, we do not allow costumes in the park any time of the year, but especially not during Howl-O-Scream," Crossett said. "The park does not wish to alienate anyone who wears traditional clothing representing their culture or heritage. However, if the clothing could confuse guests into thinking the wearer is part of the official Howl-O-Scream experience then we will not allow it in the park."