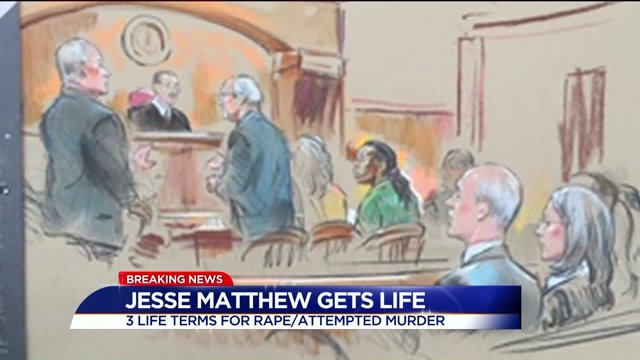 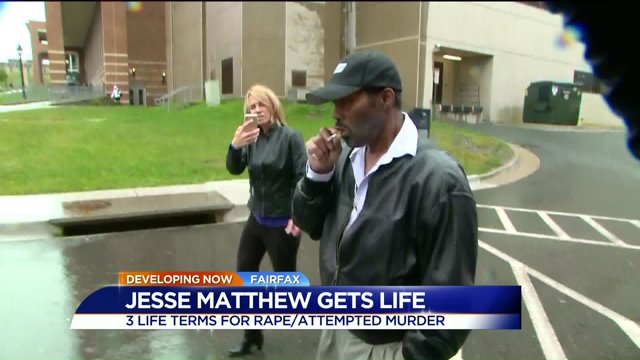 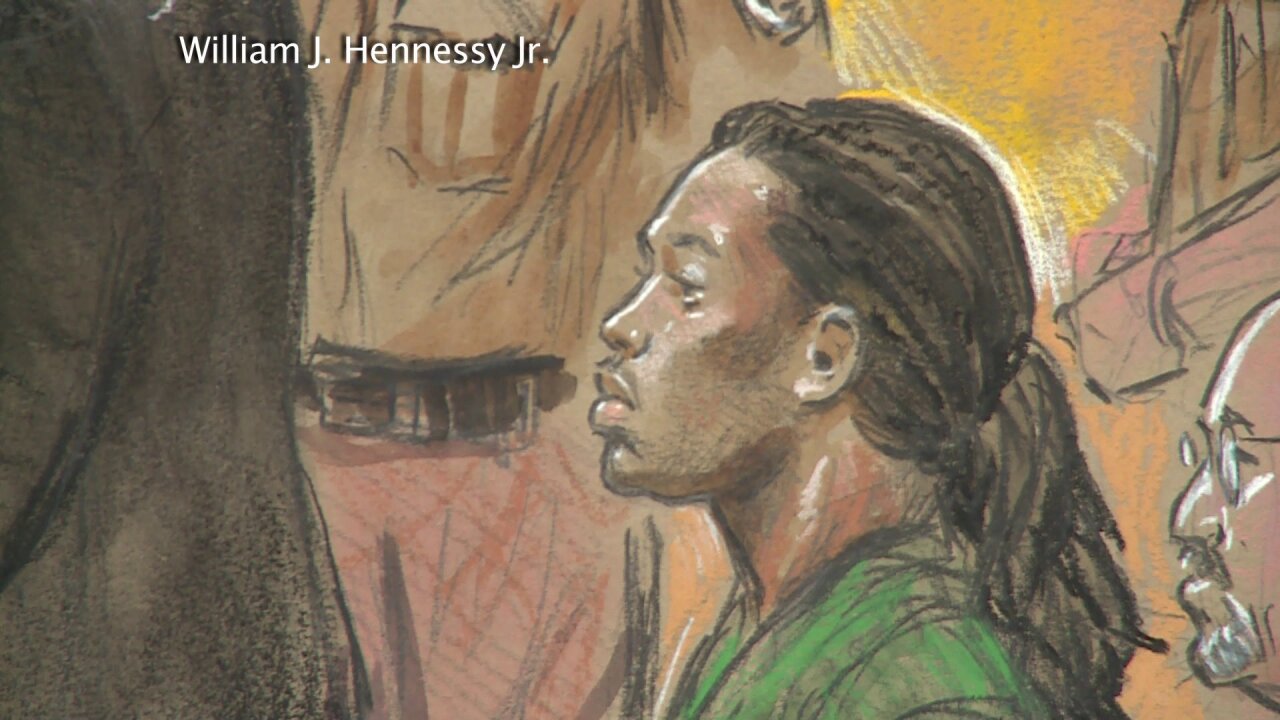 FAIRFAX, Va. -- Jesse Matthew Jr., who also currently faces two murder trials, was sentenced for the rape and attempted murder of a Fairfax woman over a decade ago.

Matthew entered an Alford plea on June 10 for the September 2005 abduction, sexual assault and attempted murder of the victim identified as "RG" in Fairfax.

With that plea he did not admit to a criminal act but acknowledged that prosecutors had enough evidence to win a conviction. However, the plea came as a surprise to many. It was a way to maintain innocence, but for all intent and purpose, there was no sentencing distinction, and his appellate rights are waived as well.

Fairfax County Commonwealth's Attorney Ray Morrogh asked for a maximum of three life sentences, and a minimum of 45 years.

On Friday, as the parents of the alleged victims in Matthew's two murder cases sat in the front row, Fairfax Circuit Judge David Schell gave Matthew  the maximum punishment of three life sentences.

Morrogh said that Matthew never accepted responsibility for his crimes by taking an Alford Plea. He also said that Matthew refused to cooperate with his probation officer for the sentencing report and that details were omitted, such as rape allegations at two universities he left.

The victim "RG" was not at sentencing. For the trial, she traveled from India to testify and witness the conviction.

#BREAKING #JesseMatthew's mom "Lord I hope you rot in hell!" Screaming as she leaves the courtroom. @CBS6

As the sentence was read, Matthew's mother began to yell at the judge: "Lord, I hope you rot in hell!"

CBS 6 has obtained a copy of the sentencing memorandum, in which the defense stated that Matthew experienced "many struggles as a child," including, "a learning disability, being the victim of bullying, financial challenges, and an alcoholic father who often used him as an alibi to have extramarital affairs."

Memorandum: #JesseMatthew's father was severe alcoholic who brought son with him to have extramarital affairs. @CBS6 pic.twitter.com/af0XA6Ptnz

In a letter submitted ahead of sentencing, a former girlfriend of Matthew said he was raped when he was a child, and alleged Matthew was sexually assaulted by at least three people when he was young.

She said his own rape likely played a role in the rapes and murders of multiple women for which he is currently accused.

#Fairfax DA: if #JesseMatthew was raped then his reaction to abuse by inflicting it on perfect stranger makes him more dangerous. @CBS6

As the Commonwealth discussed said childhood rape, Matthew rested his head on his hand.

After sentencing Morrogh responded to the letter, and said that it was sent in anonymously, with only the frist First of all, it’s an anonymous letter from an ex-girlfriend – first name only. We get it at the 11th hour. How much credibility am I supposed to give that? Now, anything’s possible. It’s possible that it’s true. But even if it were true, what difference does it make? What does being sexually assaulted when you’re a child have to do with grabbing a 110 pound woman off a public street and beating the daylights out of her and trying to kill her so you can sexually molest her? The two have nothing to do with each other.

Matthew was also "physically assaulted by his peers, who often called him "smell J,” according to the memorandum.

The memorandum alleged that the "physician at Martha Jefferson Hospital who delivered him was intoxicated."

It goes on to say, that "despite all of this, Mr. Matthew became a well-recognized athlete in his community, graduated high school, attended college, and has consistently maintained employment in order to provide for himself and his family" and that he has "sustained lifelong friendships."

Matthew faces a capital murder charge for the death of University of Virginia student Hannah Graham, 18, who went missing in September 2014, after a night out with friends. He faces the death penalty when he goes on trial for that case in July 2016.

Graham’s remains were found in October, approximately five miles from where the remains of Virginia Tech student Morgan Harrington were found, in January 2010.

The DNA collected in connection with Harrington’s death matched DNA evidence from the 2005 case for which he was sentenced Friday.