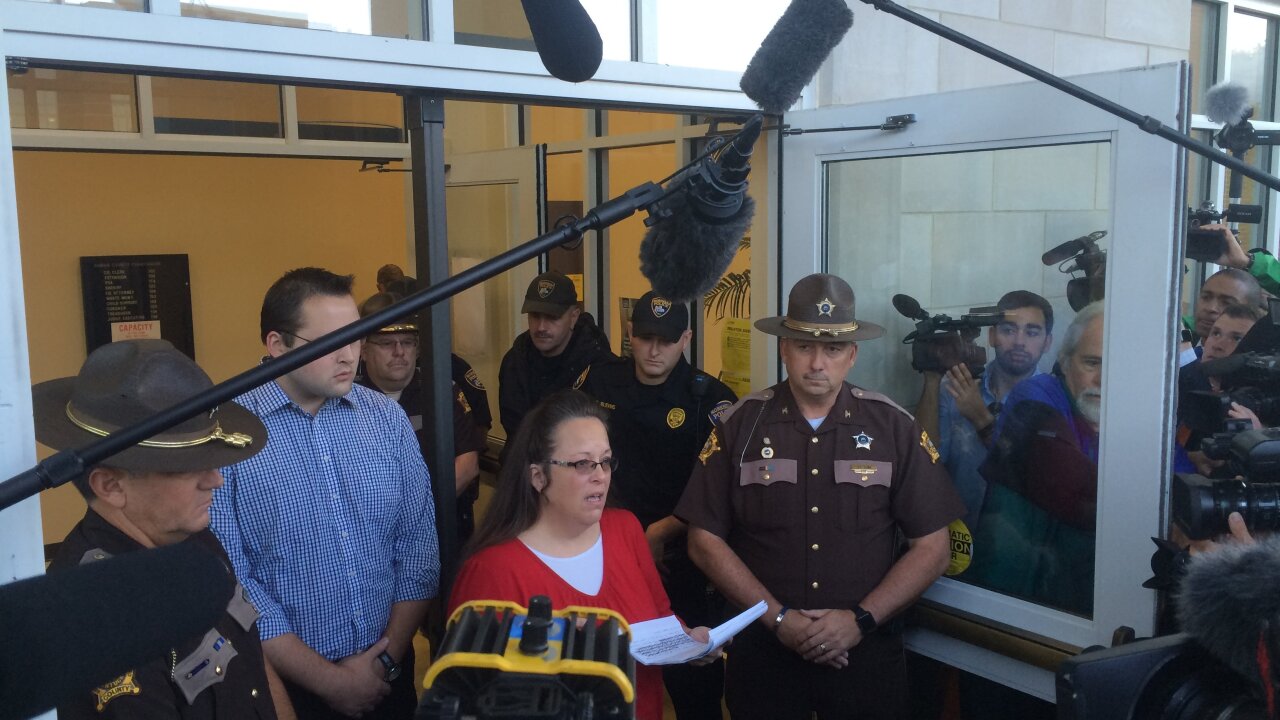 Rowan County, Kentucky, Clerk Kim Davis returned to work Monday, September 14, 2015, saying she will not issue any marriage licenses that go against her religious beliefs, but she left the door open for her deputies to continue to issue marriage licenses to same-sex couples, as long as those documents do not have Davis’ name or title on them. Davis acknowledged that she is not sure on the legality of licenses altered in such a way.

But that didn’t stop Carmen and Shannon Wampler-Collins from successfully walking out of the Rowan County, Kentucky, clerk’s office with a marriage license in hand.

Monday was Davis’ first day back in her office after spending five days in jail for defying a court order and refusing to give licenses to same-sex couples.

Before starting her workday, Davis appeared defiant, saying she will not issue any marriage licenses that go against her religious beliefs. But she left the door open for her deputies to continue giving out marriage licenses to same-sex couples as long as those documents do not have Davis’ name or title on them.

The marriage license that the couple received said “pursuant to federal court order” on it, and instead of listing Davis’ name and Rowan County, it says city of Morehead, the county seat.

David said Monday that any such licenses “will not issued or authorized by me.” Her work-around is not to sign them but not interfere with her deputies who do give them out.

Rowan County, Kentucky, Clerk Kim Davis returned to work Monday, September 14, 2015, saying she will not issue any marriage licenses that go against her religious beliefs, but she left the door open for her deputies to continue to issue marriage licenses to same-sex couples, as long as those documents do not have Davis’ name or title on them.

“(U.S. District Judge David Bunning) indicated last week that he was willing to accept altered marriage licenses even though he was not certain of their validity,” Davis said. “I, too, have great doubts whether the license issued under these conditions are even valid.”

Yet one person without such doubts is Kentucky’s governor.

“I’m … confident and satisfied that the licenses that were issued last week (and) this morning substantially comply with the law in Kentucky,” Gov. Steve Beshear told reporters Monday. “And they’re going to be recognized as valid in the Commonwealth.”

CNN senior legal analyst Jeffrey Toobin said that Kentucky law might allow for a deputy’s signature to be valid on a marriage license, even without the clerk’s consent. But if the documents are altered to remove Davis’ name and title, a court may have to rule on their validity.

Davis’ strategy is a “good faith” attempt to comply with the judge’s ruling while at the same time not violate her conscience, her attorney Harry Mihet said at a news conference Monday.

He reiterated that although one of Davis’ deputy clerks issued a license to a same-sex couple Monday, it was done so without her authorization.

The modified marriage license that Carmen and Shannon Wampler-Collins received as well as the licenses issued while Davis was in jail do not have the clerk’s authority, Mihet said.

Including the license issued Monday, the clerk’s office has issued 11 licenses since Davis went to jail September 3. Eight of those licenses have been for same-sex couples.

“If any of her clerks decide that they must issue licenses to avoid going to jail, she will not take any adverse action against them,” Mihet said, adding the clerk’s office is caught in an impossible position.

The modified marriage licenses are effectively in limbo, Mihet said, as it is unclear whether they are legal.

Another Davis attorney, Mat Staver, said a solution would be to remove not just Davis’ name and office from the marriage licenses themselves but from the process entirely. Have the state issue them instead, he said.

Sounds simple enough, but under current Kentucky state law, the authority to issue marriage licenses rests solely with each of the state’s 120 county clerks, meaning it would take an act of the legislature to transfer that authority. The legislature, however, doesn’t convene until January 5.

The state’s governor, though, thinks “there is just no need to waste hundreds of thousands of dollars of taxpayers’ money” by calling a special session.

“If you want to change the way licenses are issued, … they’re free to do so,” Beshear said of changes that could be made starting in January. “But I just don’t see the urgency now.”

Since being released from jail last week, Davis has been keeping a low profile and opening boxes of letters sent to her while she was in jail.

“I am deeply moved by all those who prayed for me,” she said in a statement. “All I can say is that I am amazed and very grateful.”