These four city blocks along Broad Street are closing, don’t freak out 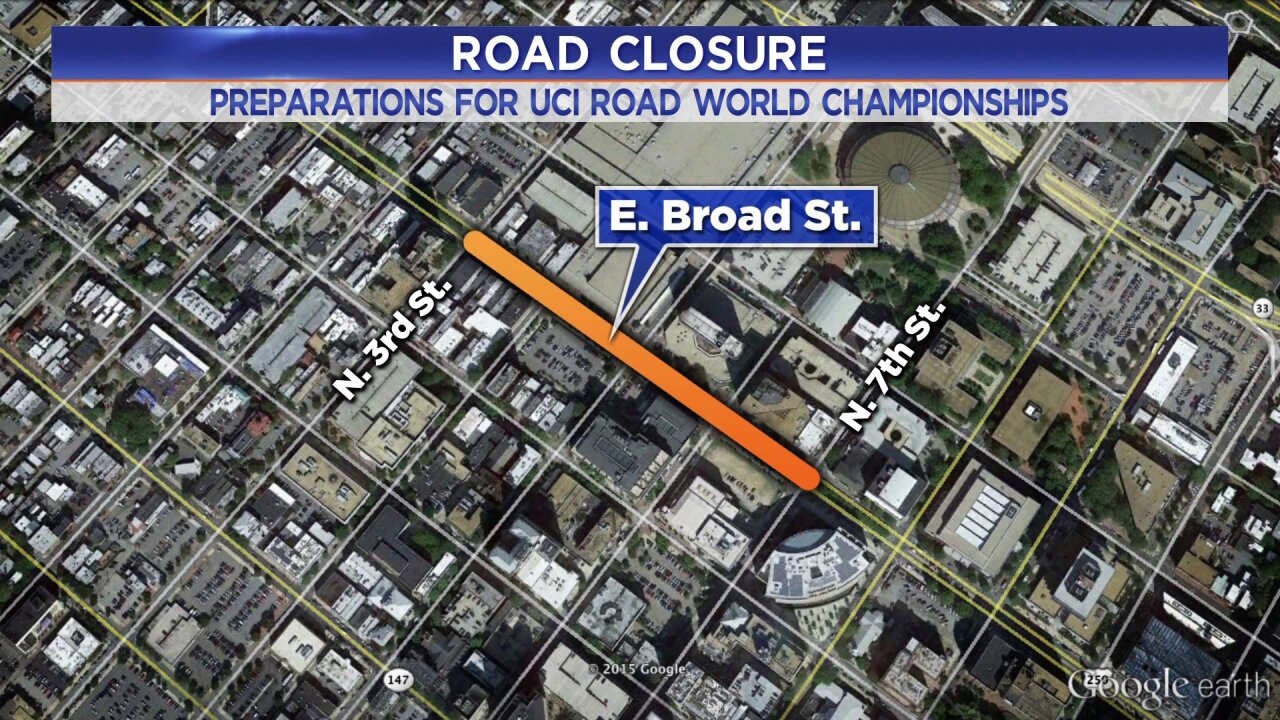 RICHMOND, Va. – A section of Broad Street that will serve as a hub during the UCI Road World Championship races will close Sept. 11 at 7 p.m., and remain closed until Oct. 1. It’s one of the few times, aside from Broad Appetit, that the major thoroughfare closes.

Signs of the city’s preparation for the races have been evident for some time, as paving and landscape work transformed downtown areas, but with the opening ceremony just six days away the bigger set builds must begin.

Sports management and promotions crew Medalist Sports, along with race officials, television crews, and contractors will begin the logistical work Friday at Broad and 5th Streets, which will be the hub during the races.

Not all races will start at the location, but all races do end there.

“The team will begin building out the infrastructure, which will slowly expand in order to finish that infrastructure in time for the race,” said Richmond2015 spokesperson Paul Shanks. “We have it very carefully timed.”

Some business owners in the area say despite the headache for drivers, the amount of people in the area could be good for business.

However, Richmond residents like Lee said he has concerns for local store owners.

"They are going to be focusing on the races and stuff so if they cant walk on the side of the street , how are they going to you know, I think its going to effect the local businesses," said Lee.

The four-block section that will close is on E. Broad St. between 3rd and 7Th Streets. Motorists will have access to the designated thoroughfares of 3rd and 7th Streets, to cross Broad Street.

Motorists will not be able to travel 4th through 6th Streets; these streets will not cross Broad.

During the build out grandstands and VIP tents will be erected, as well as the truss marking the start and finish line.

Several mast arms on traffic signals in the immediate area also will be removed to provide clearance for the stands and to prevent the view from being obstructed of cyclists.

The area will be restored, including pavement markings and traffic lights, following the race.

In the homestretch ahead of the Worlds arriving, work will continue at Libby Hill, where a VIP section will be built.

GRTC anticipates that passengers will feel the impact of the race and have created a designated page with information concerning the races, click HERE.

A Temporary Transfer Plaza will be in place behind City Hall, at 900 E. Broad Street.

"We will detour in real-time as the police begin closing Broad," said GRTC spokesperson Carrie Rose-Pace, regarding the Broad Street closures.

Field supervisors will post signs at bus stops on Broad Street when it closes.

Buses will detour to Leigh Street, starting on Sept. 19, as seen in the image below.

“The most important thing you can do is allow extra time, whether you or trying to get to or from a place,  regardless of whether it is happening during a race time – just allow extra time," Rose-Pace said.

Buses will detour to Leigh Street, starting on Sept. 19