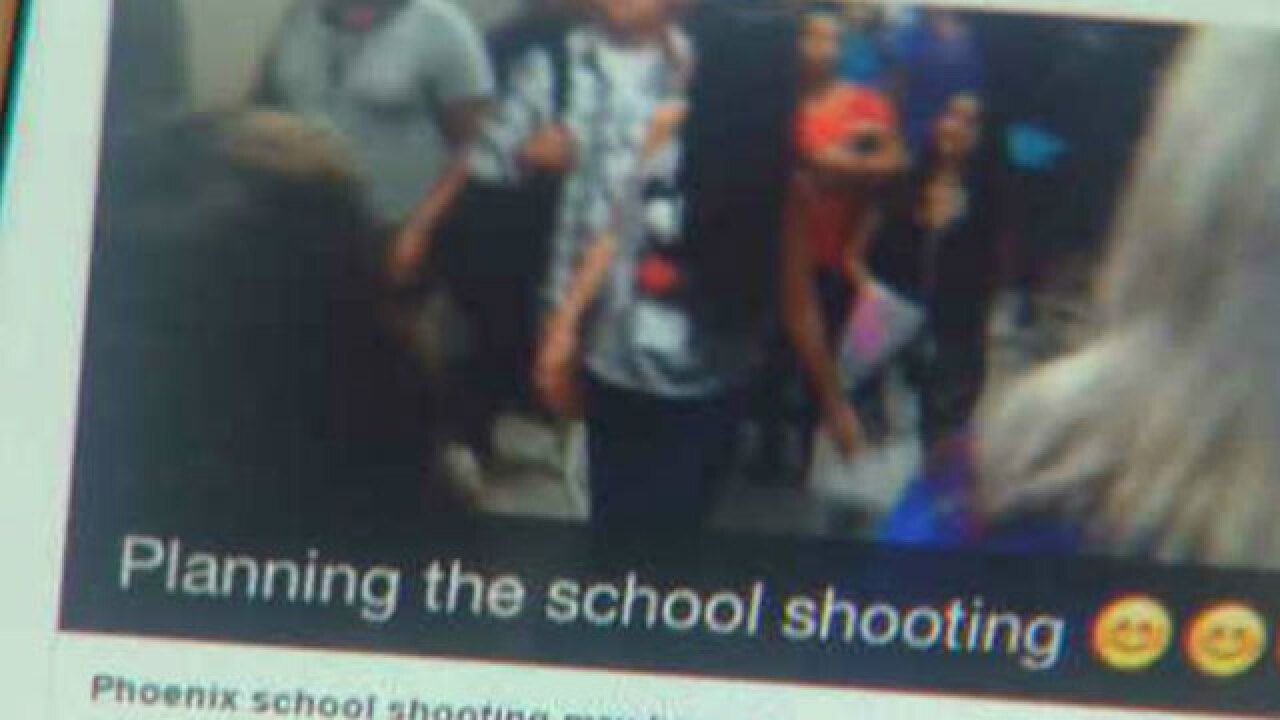 A Colorado teen saw the Snap and reported it. (Source: KPHO/KTVK)

Phoenix, AZ — A Valley teenager was arrested and suspended for something he posted on social media about his school.

The 16-year-old is a student at Sierra Linda High School, which is part of the Tolleson Union High School District.

According to authorities, the teen posted a picture on Snapchat that showed students in the hallway then added the text “Planning the school shooting.”

“It is kinda scary. A little bit, ya know? Especially when you don’t know how serious kids are,” Sierra Linda parent Gabriel Ruelas said.

“You don’t want to hear that stuff come around at your kids’ schools,” Sierra Linda dad David Payres agreed.

A teen in Colorado saw the Snap and contacted local authorities who then reached out to the Phoenix Police Department, KPHO reported.

“That’s definitely pretty brave,” Ruelas said. “Ya know, most kids don’t, they just kind of stay to themselves and don’t say nothing.”

Parents received an audio message from the school’s principal Wednesday.

“This is Mr. Madrid, the Principal of Sierra Linda with a very important message. I want to inform you of a threat that was made to our school through social media and reported to us yesterday. One of our students made a written threat on Snapchat that was seen by a teenager in Colorado. That Colorado teenager reported the threat to her local police department, who then reported it to the Phoenix Police Department. Our School Resource Officer investigated and was able to identify the student. The student was detained and taken into custody. I want to assure you that at no time was SLHS, students, or staff in any danger. The safety of our students and staff is of great importance to us. If you have any questions, please feel free to contact me. Thank you for your continued support of SLHS.”

The Phoenix Police Department told us the teen owned up to posting the photo but claimed it was just a prank.

The cops, his classmates and their parents did not think it was funny.

“That’s not a joking matter because if you think about it, there’s been a lot of shootings, a lot of threats,” Sierra Linda senior Eduardo Arellano said. “You never know what happens; Sierra Linda could be next.”

The student was arrested for creating a hoax, and while the school said they do not believe any students were ever in danger, threats are not tolerated and the teen has been suspended.

“You’ve got to take the correct action, so he doesn’t do it again,” Ruelas said.

Meantime parents and students we talked to are grateful to the girl in Colorado who wasn’t afraid to sound off about the Snap.

Snapchat is a mobile messaging app that is particularly popular with teens and young adults. It allows users to send photos and videos that are deleted within seconds. In addition to Snaps, which last up to 10 seconds, users also can send Stories, which are Snaps that last for up to 24 hours.

Although Snaps vanish from Snapchats servers, there is nothing to stop users from capturing screenshots of Snaps on their phones.