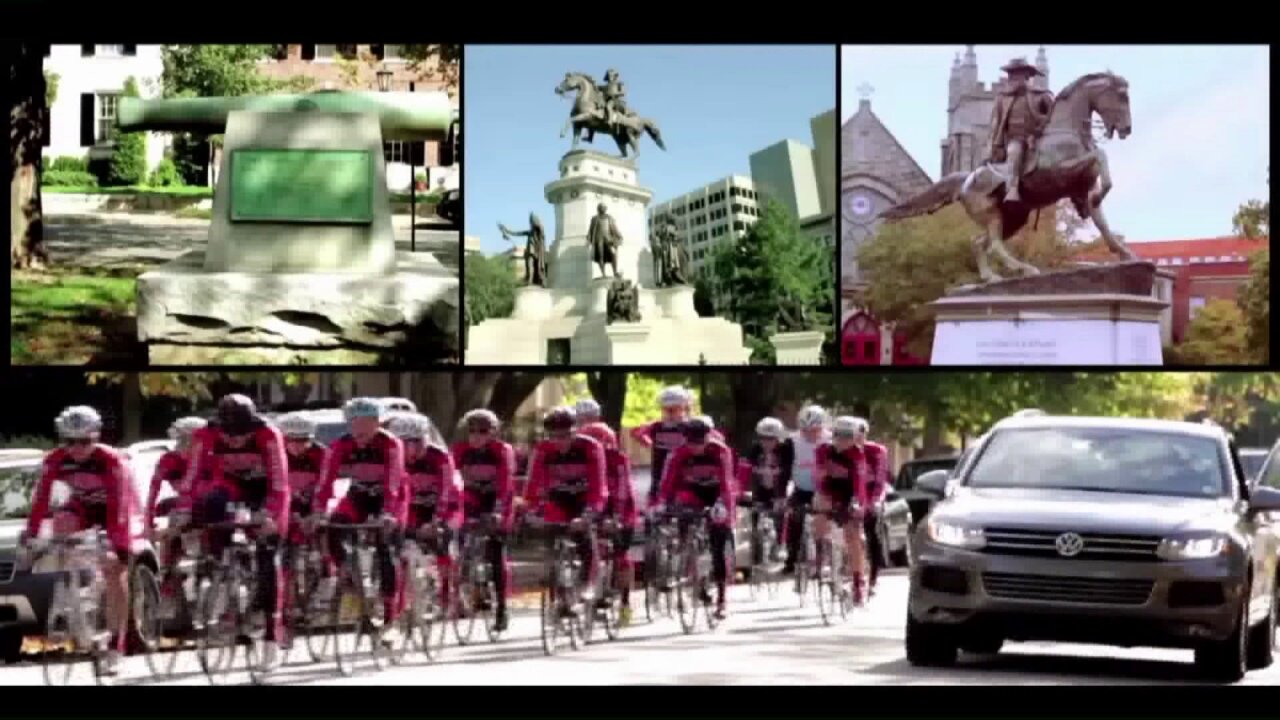 There will be more action than just bikes when the UCI Road World Championships come to Richmond.

RICHMOND, Va. — There will be more action than just bikes when the UCI Road World Championships come to Richmond from Sept. 19 – 27. In celebratory fashion, there are numerous events surrounding the big bike races that locals and visitors alike to enjoy.

Ahead of the races are the opening ceremonies, which commence on Friday, Sept. 18, from 6:30-8 p.m. on Brown’s Island in Richmond’s downtown.

“American Idol” finalist and Richmonder Rayvon Owen will perform the national anthem before the Richmond Symphony takes the stage for a free concert, BUT A TICKET IS REQUIRED in advance. As of Sept. 11, 7,000 had been claimed. Claim yours here.

Ahead of the races local museums have created bicycle-themed exhibits. The complete list is here.

Lewis Ginter Botanical Gardens will be a hub hosting numerous activities during the bike races. The gardens are a starting point for the races on Sunday, Sept. 20, they have several bicycle-themed exhibits and they will also host several live music events.

Just steps away from the start/finish line, the Greater Richmond Convention Center, at 403 N. 3rd Street, will host the Richmond 2015 FanFest, from Sunday, Sept. 20 to Sunday, Sept. 27.

That will be the hub for the races, with more than 100 exhibitors and vendors. There will be live music, food and beer. Also, a KidZone. Live coverage of the races is shown from inside the FanFest.

Most of the races take place during the afternoon, leaving lots of time to explore Richmond, and enjoy some of the events around town. [See: Times, closures and fan zones for Richmond 2015 bike races]

The map below, of places to visit in Richmond, was created by Steen Wear, who specialize in custom cycling wear. They will have  a pop-up shop during the races, at 201 E. Broad Street.

A lot of locals discussed hosting pop-up shops near the race, and that became a reality for the Bizarre Market, who has organized “Pop Secret” in Jackson Ward.  This 10-day-long shop will feature homemade items by 25 hand-picked local designers and crafters. The shop, located at 120 W. Marshall Street, will be open from Sept. 18- Sept. 27 with hours from 10 a.m. – 6 p.m.

There will be a Hanover Bike Fest on Sept. 23, as the Men’s Elite Individual Time Trials race north of Richmond. A great way to catch some of the race, and there will be local food and beer vendors.

There will also be a mOb market, or Middle of Broad market, just three blocks away from the finish line. Vendors will be set-up for three to four days during the UCI races, Sept. 25 – Sept. 27. Market hours are 9 a.m.-6 p.m.

Oktoberfest, at St. Benedict’s Church on 300 N. Sheppard St. in Richmond runs Sept. 18 – 20. While it isn’t bike-themed, it is a great place to get some German food and try lots of craft beer from around the region. For hours and location, CLICK HERE.

Take a cab or Uber out of Richmond and head out to Meadow Event Park, near the start of the Men’s Elite Time Trial race, for the State Fair. CLICK HERE for info.

Another Oktoberfest close to the downtown races is on Saturday, Sept. 26, at Capital Ale House at 623 E. Main Street. The event runs from noon until 10 p.m., CLICK HERE for more info.

The International Food Festival, a celebration of food from around the world takes place from 11 a.m. – dusk on Saturday, Sept. 26, at the Cathedral of the Sacred Heart, at 800 S. Cathedral Place and Laurel Street in Richmond. There will be food from around the globe, including German, Irish, Southern American, Filipino, Vietnamese, Polish, Italian, Haitian, and Cajun. Alcohol will be available for purchase.

Are you hosting a Richmond 2015 event?  Let us know via email!