Back-to-School Warning: Why head lice are now resistant to treatment 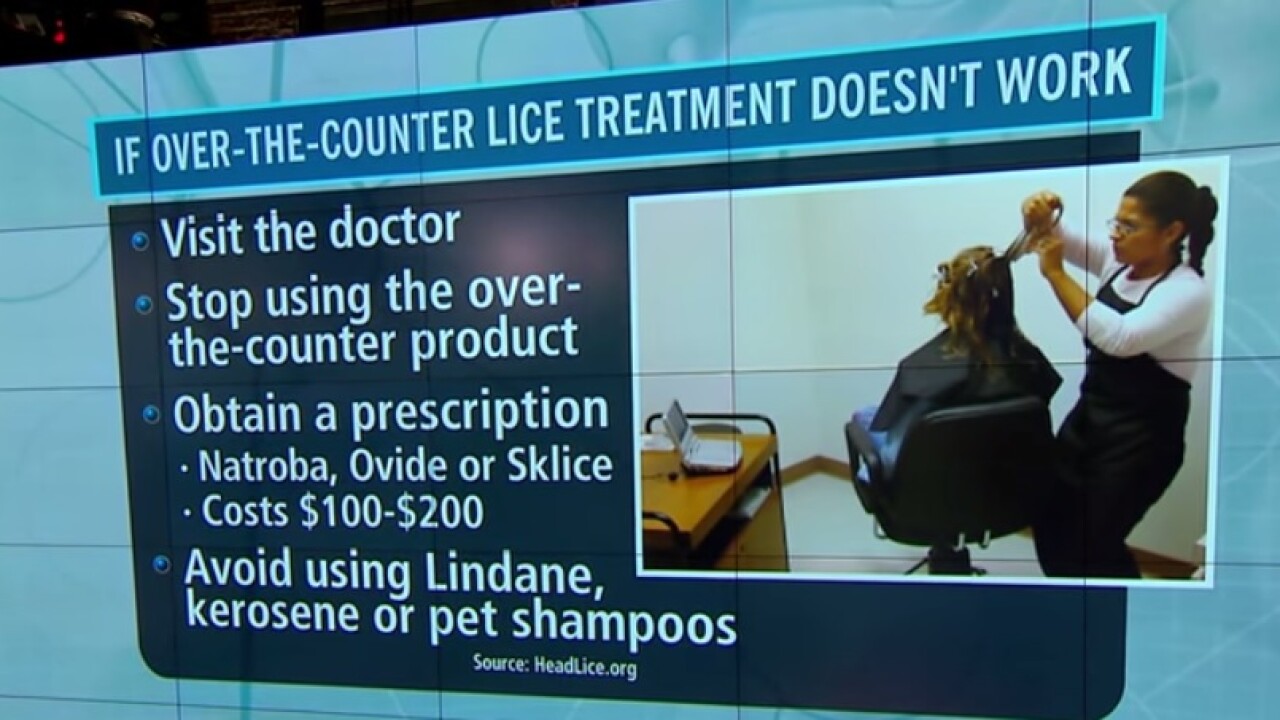 Head lice are a lousy part of the school year or summer vacation for an estimated 6 to 12 million children in the United States every year. Infestations can lead to itchy scalp, irritability and poor sleep.

To make matters worse, there are hints we could be losing some of our easiest and cheapest defenses against these insect interlopers. Studies suggest many lice may no longer be killed by over-the-counter treatments such as Rid shampoo or Nix rinse.

Newer generation lice-fighting chemicals are an option if the usual treatments fail, but they are often more expensive. A number of parents are taking their children to “nitpickers,” who manually remove the insects from hair using combs and sometimes just their fingers.

Reports of lice resistance started appearing in the mid 1990s in the United States, Europe and Australia. A 2014 study suggested the potential for resistance is high in several areas in the United States and Canada. Among lice samples from 84 people in these countries, 99.6% of the insects had mutations in genes that could allow them to survive the insecticides permethrin and pyrethrin, which are the active ingredients in over-the-counter remedies. In the past, this group’s research has received financial support from pharmaceutical companies that make such prescription medicine.

A new study by the same researchers who did the 2014 study suggests these resistance genes could be widespread in the United States. They studied 109 lice populations from 30 states, each population representing insects from several people. Out of those 109 populations, 104 (95%) contained insects that possessed the genes.

The study was presented Tuesday at the American Chemical Society meeting. It has not been evaluated by independent experts for publication in a peer-reviewed scientific journal.

In samples from 25 of the 30 states, there were insects that had resistance genes. In some samples, including ones from California, Florida, Maine and Minnesota, every insect in the sample did.

“It’s almost saturated with [these genes], which means that people using permethrin and pyrethrin based products will probably have a very hard time controlling the lice,” said Kyong Sup Yoon, associate professor of biological sciences and environmental sciences at Southern Illinois University, who led the research for the current study and the 2014 study.

Yoon’s research was funded by Sanofi, a pharmaceutical company that owns Sklice lotion, which contains a newer generation lice-fighting chemical.

“In places where people have been using [over-the-counter] lice products continuously for a long time, [resistance] is not unexpected,” said Dr. Barbara L. Frankowski, professor of pediatrics at the University of Vermont.

The insecticides in these products are supposed to work by getting into the nerve cells of lice and changing the cells’ chemistry in a way that leads to muscle paralysis and eventually death. However, there are lice that randomly have mutations in genes that make them less susceptible to these insecticides, said Richard Pollack, a public health entomologist at Harvard University. It is not clear how, but it could be that these genetic changes cause insect nerve cells to take up less insecticide or to pump more of it out of the cells.

When these insecticides are used a lot, the naturally resistant, probably rare, lice have a survival advantage. Just like how bacterial populations can become resistant to antibiotics, these lice take over the population, Pollack said. It would probably take many generations of lice before you would start to notice a spike in the level of resistance, he added.

While the solution could be to use lice-killing products that contain other chemicals, such as Ovide and Natroba, it would not be a lasting fix. There may be lice that harbor some level of resistance to these newer products and they would eventually take over the population if the other products became widely used, Pollack said.

“I do expect that we will see resistance to any product with the exception perhaps of combing and heat and smothering the lice,” Pollack said.

Don’t give up on over-the-counter treatments yet

Although the recent research would seem to suggest it is time to throw in the towel on over-the-counter lice shampoos and creams, they should still be the first line of treatment, Frankowski said.

While there is “for sure” resistance, it is not clear how common the problem is, she said.

Even if resistant lice are becoming more common, the infestations they cause are no worse than those of other head lice, except they can be harder to get rid of. “No one ever died of a head lice infestation,” said Frankowski, who is a spokesperson for the American Academy of Pediatrics and co-wrote its 2010 clinical report on head lice.

If parents hear from the school nurse or their pediatrician that children have not been getting better after they use the Rids and Nixes on the market, it could be an indication there is lice resistance in the area.

There are also a number of prescription treatment options, including Sklice, Ovide and Natroba. All use different types of chemicals than permethrin and pyrethrin, and thus lice that are resistant to over-the-counter treatments should not be resistant to them.

These treatments cost between $100 and $200, plus the co-pay to see a doctor for the prescription, compared with $10 or $20 for over-the-counter shampoos, Frankowski said. Some insurance companies will cover the cost, but often only after you have failed to get relief from the nonprescription options, she said.

Should you be a nitpicker?

Another strategy for getting rid of lice infestations is to brush the hair with a fine-tooth comb that pulls out the insects and sometimes even their eggs (called nits).

For children with straight, fairly short and manageable hair, this is the first thing that parents can try, Pollack said. “Get yourself a good lice comb, read the instructions and use it,” Pollack said. However, for children who have very thick or curly hair, it might be easier for parents to start by trying over-the-counter shampoos, he added.

A growing number of companies across the United States offer lice removal services, also known as nitpicking, some of which involve mostly just a good brushing. These companies will probably capitalize on the recent research suggesting the high rate of treatment resistance among lice, Pollack said.

“Lice salons as a cottage industry are spreading faster than lice themselves … I am pretty certain you would not have to drive more than an hour to find someone,” Pollack said.

“Business is booming,” said Penelope Good, founder of Licebeaters, a Long-Island based company that makes house calls for clients in New York, New Jersey, Maine, Connecticut and Florida. “It’s surprising how savvy the parents are, with the Internet and everything, they know that the over-the-counter stuff is not going to work,” Good said.

Licebeaters starts by looking for lice, and if it finds them, uses an olive oil solution that drowns the insects and makes them easier to comb out of the hair, Good said. Then specialists use their fingers to pick out the remaining nits. The service costs $250 an hour. “Some can do this themselves, but most people want help,” Good said.

Another New York-based lice removal company, called Lice Busters, uses an extra-fine-tooth comb that can pull out both the insects and their eggs, said Yoni Harel, president of Lice Busters. The service costs $150 to $200, depending on the amount of hair, but most clients can get their insurance companies to reimburse some of it, Harel said.

Most clients “run to the pharmacy first, buy five or six over-the-counter products, and it doesn’t work,” and then they use Lice Busters, Harel said.

Pollack noted that these businesses are not regulated by the medical community, although some areas do require them to have a license to operate. Although combing and hand picking can be effective if the companies know what they are doing, many use “potions” that have not been shown to help, Pollack said.

These businesses also may lack the expertise to diagnose lice. “In my experience, they go in the door, they take a look and they say, ‘Yes, your child has lice,'” Pollack said.

Pollack runs a diagnostic services company called IdentifyUS, independent of Harvard, which receives insect samples or photos from people, and for a $25 fee, the company tells them whether they have lice.