How Mike Epps and other celebs have been embarrassed on Twitter 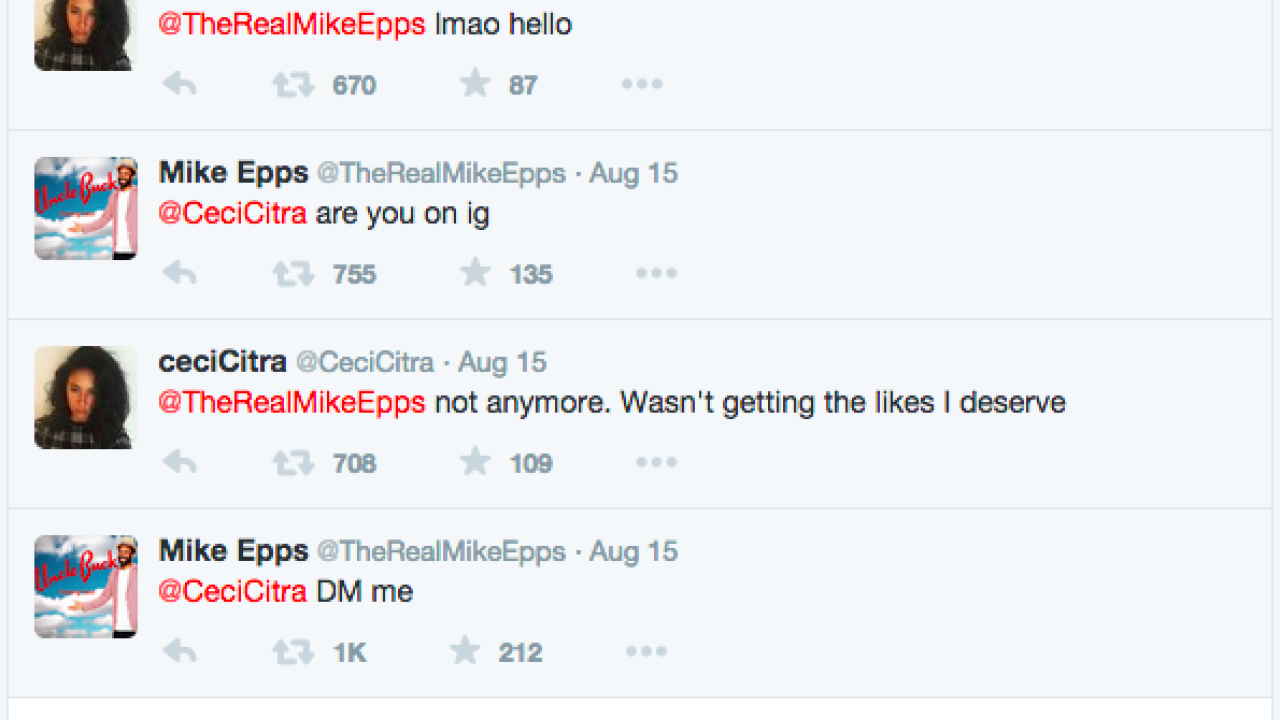 It’s helpful to remember whether your spouse is following you on Twitter when conversing with members of the opposite sex.

Comedian and actor Mike Epps learned that the hard way when he recently started chatting with a woman on the social media site. (In case any of the tweets get deleted, some outlets have screengrabbed the exchange.)

It all started innocently enough, with Epps shooting Twitter user @CeciCitra a “hey” and asking her whether she was on Instagram. When she responded that she wasn’t because she “wasn’t getting the likes I deserve,” the comic requested that she direct-message him.

Epps’ wife, Mechelle, replied to the pair’s back and forth with an emoticon of eyeballs.

@CeciCitra later tweeted a screenshot to show that Epps had blocked her.

The suspicious among you may question whether it’s all a publicity stunt, but allow us to point out that Epps is not the first celeb to get embarrassed on Twitter. The tweets are usually taken down as soon as the celeb realizes the gaffe.

We know the supermodel’s heart was in the right place when, in 2014, she went to congratulate 17-year-old Malala Yousafzai on becoming the youngest person to win the Nobel Peace Prize.

Problem is, she spelled the teen’s name “malaria” when she tweeted and Instagrammed. Blame it on autocorrect, maybe?

The reality star and entrepreneur apparently loves, loves, loves a particular foundation from designer Giorgio Armani, so much so that she tweeted her distress that it was going to be discontinued.

Unfortunately, she spelled the designer’s name wrong, and the folks over at Armani were quick to let the star know.

In 2009, the actress thought she was direct-messaging her phone number to a friend, but she was actually shooting out her digits to the entire Twitterverse.

She apologized and changed her number.

In 2010, the comic ran afoul of his wife, singer Katy Perry, when he tweeted a picture of her without makeup, appearing to have just woken up, to his more than 1 million followers.

Perry was not amused, and the couple have since divorced.

The R&B superstar was trying to express frustration that people underestimate how smart she is when she tweeted in 2009, “Why is that people always try to understand estimate my intelligents?!”

Suffice it to say, the message did not quite get across.