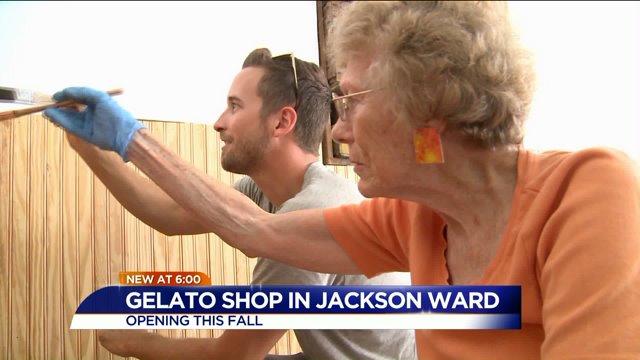 Shelby Brown has the touching story, for WTVR.com. 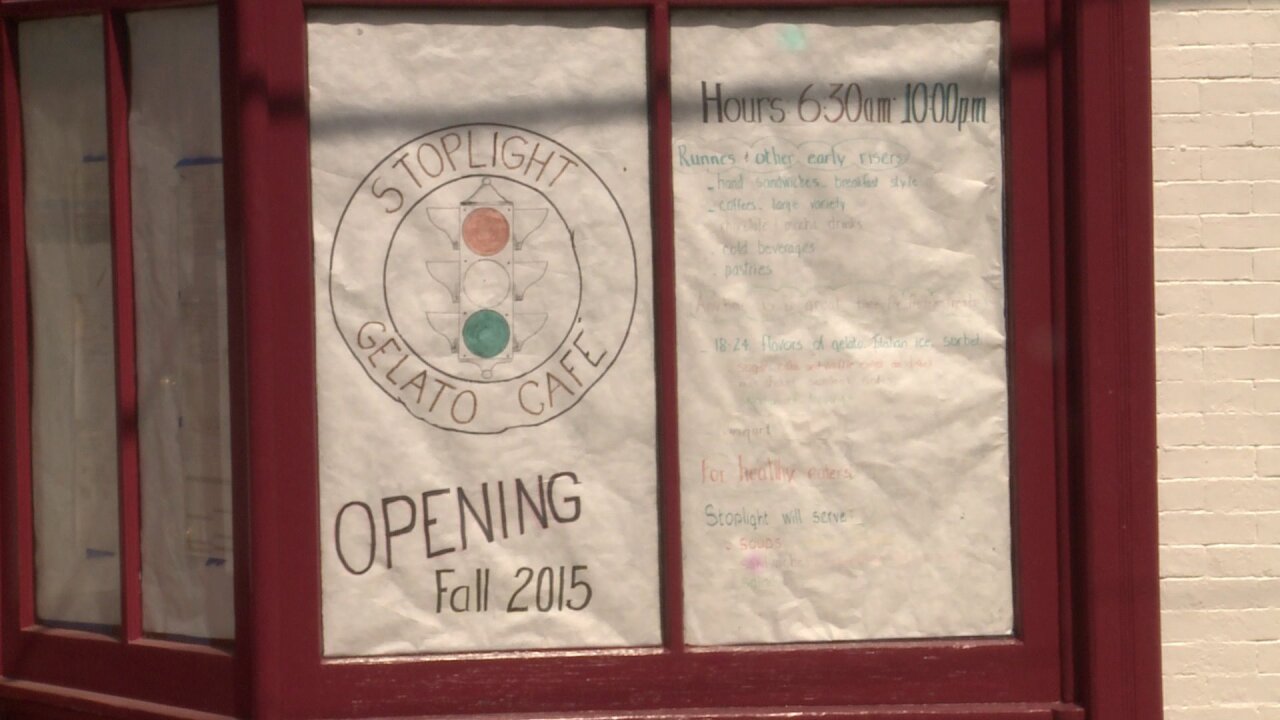 RICHMOND, Va. – Neighbors are joining in to help a woman realize her son’s dream.

If you stick around 405 Brook Road long enough, Ms. Barbara Given might just put you to work. In the blink of an eye, you’ll have a paint brush in your hand.

Some neighbors say they don’t mind that at all. In fact, they’re honored to step in and help the 80-year-old woman bring the Stoplight Gelato Café to Jackson Ward.

This project was her son Bryce’s passion before he passed away from cancer this past Easter. Barbara says her son’s vision for this business takes her back to the days when she worked in a Manhattan, Kansas ice cream shop. She worked out front selling the ice cream that her brother made in the back of the parlor.

“I loved the idea of seeing people smile and having a good time eating ice cream,” Given said. “At that time you could buy ice cream for a dollar – a big carton.”

The proud mom is so focused on making this vision a reality that she has temporarily relocated to Richmond from Alexandria to finish what Bryce started. She’s even renting out her home in Northern Virginia at this time.

Barbara becomes filled with emotion and can hardly hold back the tears when she thinks about how her son poured his heart and soul into the café.

From the outside you can see a colored sketch hanging in the window, bearing their signature four- way traffic signal. Barbara says that was Bryce’s idea.

“He had a propensity for finding things he liked,” she said. “We end up finding places for them.”

“He found a four- way traffic signal that wasn’t functional and bought it from someone,” Given said. “We are going to hang it right here in the middle.”

Givens went on to say that she couldn’t do this without neighbors who rallied around her.

Neighbor's are pitching in to help complete the project.

“The people here are wonderful. Neighbors are fantastic,” she said. “They look after me.”

“I think Bryce must have told all of the neighbors here to make sure my mama’s safe,” Given added.

Kelly Powers, a Jackson Ward neighbor who is in the process of starting her own business designing clothes, said she was quite happy to volunteer. She and her husband, local author Kevin Powers have popped in on many occasions to help paint or do whatever Barbara asks of them.

She calls the 80-year-old woman a mentor and friend. Powers is connected to Given because she and her husband bonded with Bryce when they first moved to the area.

Now that Bryce is gone, Powers says they want to make sure his mom makes that Stoplight Café dream a reality.

Kelly Powers, a Jackson Ward neighbor who is in the process of starting her own business designing clothes, said she was quite happy to volunteer.

Scott Niezgoda is also joining in on the effort. He’s an adjunct professor at VCU and will be teaching Chemistry in the fall.

He too, has helped with hanging blinds and putting up railings outside of the adjoining apartment that Bryce was going to live in when the café was completed.

Niezgoda says volunteering just seemed like the right thing for him to do.

“It felt like a good thing to do right now. She’s a nice person to be around and help,” Niezgoda said. I think it’s going to be fantastic. I know it means so much to her and I think her son sort of still lives in this place for her. It’s really nice to be able to help carry on this dream”.

Neighbors say they are excited for the fall opening of the Jackson Ward café. They call it a labor of love that has drawn the community closer together before they even opened these doors.

“It’s about friendship and having people's dreams and goals come to life,” Powers said. “To be a small part of it is such a gift to me, " Powers said.

Given hopes this café will be a gathering place for the community, something to make her son very proud.