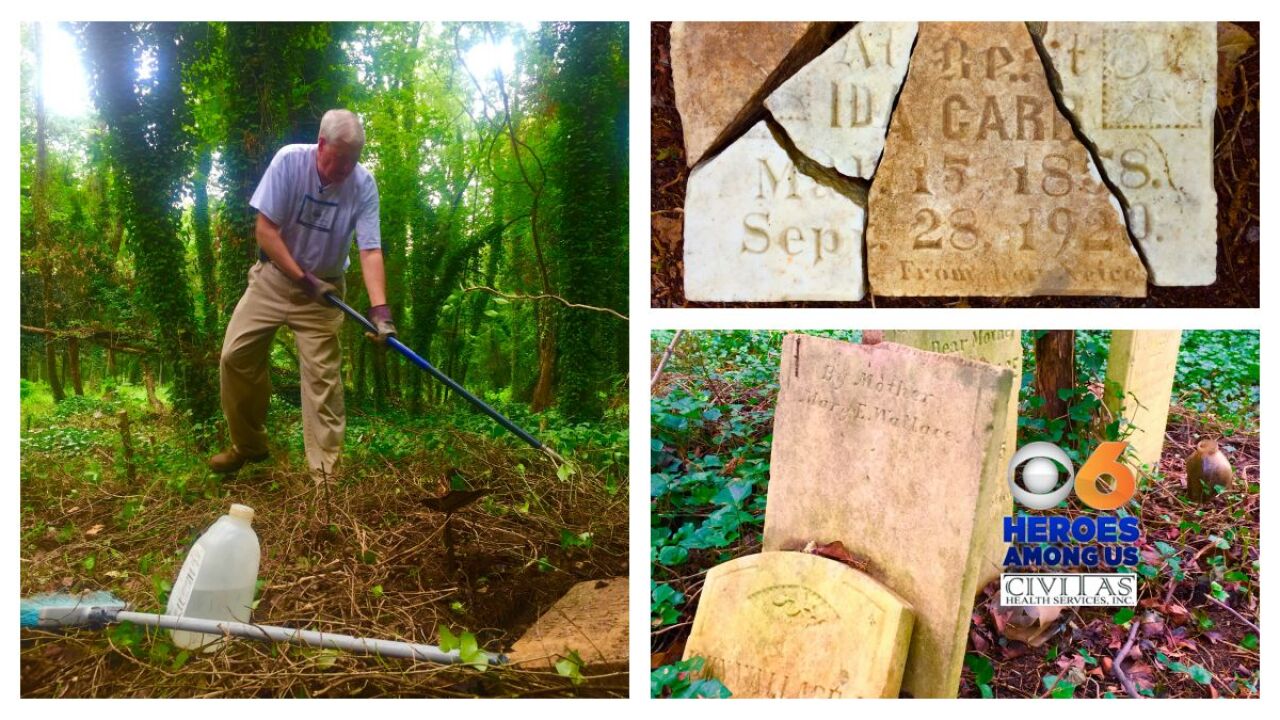 RICHMOND, Va. -- There is a treasure hunter in our midst here in Central Virginia. But this man isn’t looking for chests of gold coins and silver necklaces.

He is a man who truly digs the long lost past.

It’s a long way from the cornfields of his native Iowa, but in this tangled mess of vines and branches John Shuck feels right at home.

“Who knows what’s under all of these trees,” says John. “This whole area was overgrown.”

John Shuck has been working on this project for years.

In this small 16-acre corner on the Richmond-Henrico line John is digging for buried treasure. For more than two years John has been clearing and cutting. His goal is to preserve history.

“Here is a part of the city that nobody knows about,” he adds. “It’s interesting. I got hooked into it. People get hooked into this.”

East End Cemetery, the final resting place of countless prominent African-Americans, has been sitting neglected for decades; all but forgotten.

But John, who is a driving force behind the preservation group Virginia Roots, is shining light on not just black history, but Virginia history.

He, along with other volunteers like the Boy Scouts, college students and church groups are slowly making progress.

John points to one gravestone he discovers during our visit.

He is uncovering graves foot by forgotten foot. The work can be breaking for the back -- and tools.

During his digs dozens of veteran’s stones have turned up.

Mother Nature has all but reclaimed the land and obstacles in the oppressive summer humidity can numerous.

“Mosquitoes, ticks, yellow jackets or ground bees or whatever you want to call them,” says John. “There is English Ivy, poison ivy and greenbrier all over the place.”

John not only battles nature, but vandals too. During our visit a disgusted John discovers the gravestone of Dr. Robert Tuncil has been stolen.

“He was a doctor who got his training at Howard University. This was here a week ago. And now what? We’re going to have to file a police report. Why? Why? Why do you do this?”

Despite disappointments the 67 year old’s commitment does not waiver.

“You can’t look at this and say ‘Oh, my God. We’ll never get this done. You have to put on blinders and do a plot at a time.”

John has uncovered hundreds of graves.

John Shuck hopes this sacred place can be maintained so those who have gone before us will be ignored no more.

“You know you’re uncovering history. Who knows what it’s going to turn out to be. It could be someone that has been looking for family history and we’ve uncovered it.

When John started clearing East End two years ago only 50 burials could be found on the “Find a Grave” website. Now there are nearly 1,400.