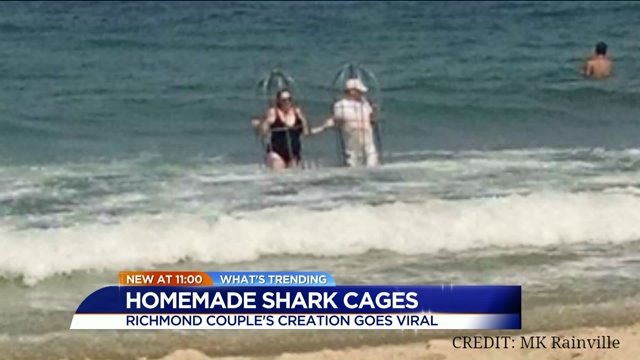 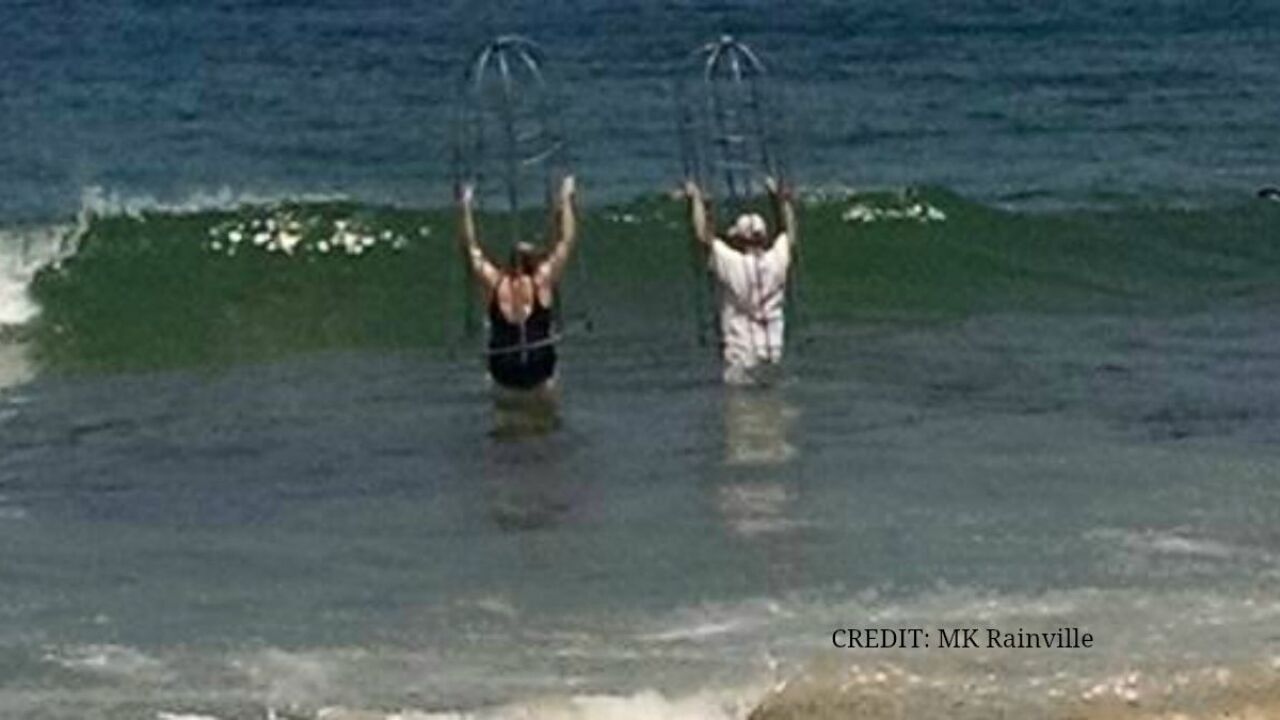 The recent streak of shark attacks along the Carolinas hasn’t kept away the tourists, but the tourists are coming prepared.

Check out the photos and video captured by MK Rainville, that show a male and female nonchalantly walk into the water with homemade shark cages. The images were taken at the Ocean Bay Blvd. beach access in Kill Devil Hills.

Turns out the couple was from Richmond, and they  made the 'shark cages' at their home out of PVC and painted them to look like steel.

"We first knew something was up when the wife was taking photos of her husband with the cage and then proceeded to take video," Rainville said. "I imagine their video will surface soon."

Bergman and his wife schemed up the Block Jaw, PSC One.

That's where Scott Bergman swims into the picture. He and a group of his friends were discussing all the shark attacks taking place along the Outer Banks and they speculated what a smart business person would come up with for personal protection in the midst of oceanic crisis.

Then, over the weekend Bergman and wife Sandi took their prototype --  what they call the Block Jaw, PSC  One -- to the beach for a test swim. It's the acronym for "personal safety cage, one made of PVC pipes and steel bolts."

The plan was to make a funny video on a way people could protect themselves from all the shark bites that have been reported on North Carolina’s coast this summer. Not to make light of the terrible suffering experienced by the victims, Bergman emphasized, but rather as a way to introduce some levity into the extensive coverage.

“Here’s the thing, it’ll keep me safer from sharks than it’ll keep you safe from sharks being outside of it," Bergman said, laughing. "That’s the way we look at it."

Bergman is also laughing because he has a lot of people from the Outer Banks and on social media fooled. Literally,  thousands.

The couple plans to release the spoof video soon, but in the meantime, Bergman just hopes everyone will be safe out there in the ocean.

They did produce this postcard earlier in the day, as a little vacation memento. And he said the invention would likely start retailing at $499.99.

Greetings from the Outer Banks

Earlier in June and July, there were several attacks within a short period of time.

On July 6, a male victim was treated after being bitten in Surf City.

On Wednesday, July 2,  a 68-year-old man was pulled under the water by a shark in the Outer Banks on Ocracoke Island.

At the end of June, two people were bitten by sharks near Cape Hatteras.

On June 26, a 47-year-old man was bitten by a shark in the leg and back while trying to get children and another adult out of the water near Avon.

On June 27, an 18-year-old was swimming with other people near Waves when the shark bit his calf, buttocks and both hands.

Both victims were rushed from the beach and underwent surgery.

In South Carolina, a shark attack also took place Friday morning at Hunting Island State Park. The male victim was taken to Beaufort Memorial Hospital for treatment. No further information was available about the victim or the extent of his injuries.

On June 24, an 8-year-old boy in Surf City suffered what appeared to be a shark bite. Police said the wounds were superficial and the injuries were minor.

On June 14, 12-year-old Kiersten Yow from Archdale and a 16-year-old boy from Colorado both lost their arms in shark attacks at Oak Island.

Yow lost her left arm below the elbow and suffered injuries to her left leg. Hunter Treschl lost an arm.

A 13-year-old girl was bitten while boogie boarding off Ocean Isle Beach on June 11. In that incident, the victim suffered non-life threatening injuries, but the shark took bites of her boogie board.