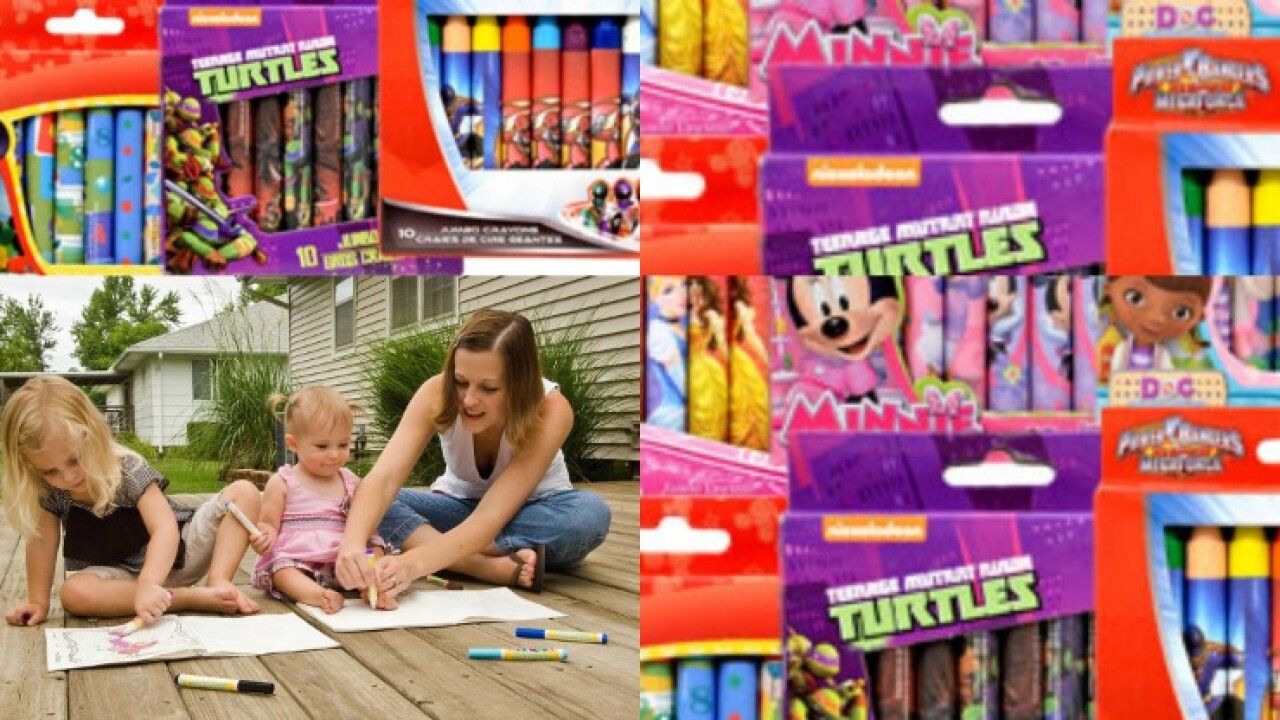 The EWG Action Fund is calling for a ban on asbestos in consumer products after it found traces of the carcinogen in children’s crayons and toy crime lab kits.

Four of 28 boxes of crayons tested positive for asbestos, according to the newly released report from the advocacy group. A private lab hired by the EWG Action Fund, a sister organization of the Environmental Working Group, also detected and confirmed asbestos in two of 21 toy crime lab kits it evaluated.

Breathing in microscopic asbestos fibers has been linked to serious health problems, including lung disease, lung cancer and mesothelioma. The Environmental Protection Agency says exposure to asbestos only occurs when asbestos-containing material is disturbed, and when the particles become airborne.

“Parents do need to be concerned about particular brands of products where asbestos was identified,” said Dr. Jerry Paulson, the former chairman of the American Academy of Pediatrics’ Council on Environmental Health.

However, the EWG Action Fund report does not list the amount of asbestos found in the products.

Paulson, who is not affiliated with the report, said that powder from the crime lab kits was of particular concern.

“Powders make this material much more available to the lung, where asbestos does its damage,” Paulson said.

‘Child safety is of the utmost importance’

CNN contacted importers, distributors and retailers named in the report for comment. Representatives from Amazon, MII Inc. and Buy-Rite could not be reached. The report specifies that “product names may be licensed and do not necessarily reflect the name of the manufacturer.”

The vice president of investor relations for Dollar Tree, which owns Greenbrier International Inc., an importer and distributor named in the report, released a statement: “The safety of our customers is paramount and we work constantly to ensure our suppliers’ products are compliant and safe. To that end, we have a very robust and stringent test program, which includes working with independent CPSC-accredited testing companies to ensure our suppliers’ products meet all safety and legal standards.”

A spokesperson for Party City, which is owned by Amscan, said in a statement: “Amscan is dedicated to ensuring that all of its products meet or exceed federal, state and municipal requirements. To this end, Amscan conducts compliance testing of its suppliers’ products by using nationally recognized product testing organizations. Any product that fails to meet governmental or Amscan’s standards will not be distributed or sold. We take these types of matters very seriously and are investigating further.”

Toys R Us spokeswoman Kathleen Waugh said in a statement: “The safety of our customers is, and always has been, our highest priority. We take this responsibility very seriously. We require that every product we carry meets or exceeds all applicable state and federal laws, industry standards, codes and requirements. At this time, we are reviewing the referenced report, along with supplier test reports, to ensure full compliance to our strict safety standards.”

The Consumer Product Safety Commission “takes the issue raised in the EWG report seriously, and CPSC staff is going to follow up in regards to the product that the EWG identified in their report,” Scott Wolfson, communications director for the CPSC, told CNN.

“Child safety is of the utmost importance to CPSC, and we have looked into the issue of asbestos in crayons and possibly being in fingerprint kits in the past. The agency has advised manufacturers in the past to not use any chemicals or any materials that could put a child’s health at risk. And we will once again look at the products that have been identified in this new report.”

While reports of asbestos in children’s toys aren’t common, this isn’t the first time kids’ products have tested positive for asbestos.

The EWG Action Fund conducted its study as a follow-up to earlier investigations, the report’s co-author, Sonya Lunder, told CNN.

“It is really shocking to have had these two reports previously raise attention to the issue (and) have manufacturers pledge to pay more attention and to see there are still products on the shelf that have talc, which is contaminated with asbestos in many cases,” Lunder said.

The CPSC found that in the case of the 2000 report, the amount of asbestos in the crayons was so small it was “scientifically insignificant.”

For its recent report, the EWG Action Fund purchased crayons and toy crime lab kits at national retail chains near San Francisco or at online retailers between February and May 2015. The Scientific Analytical Institute in Greensboro, North Carolina, conducted the product testing, according to the report.

The group also tested sidewalk chalk from two retailers; no asbestos was found.

The report said three types of asbestos — tremolite, chrysotile and anthophyllite — were found in the children’s products. The asbestos was probably a contaminant of talc, which can be used as a binding agent in the crayons and in powder in the toy crime lab kits. According to the report, asbestos is often found in mines alongside talc deposits.

Unlike regulations governing lead in children’s toys, Congress has not passed any laws pertaining to asbestos in children’s products, the CPSC’s Wolfson said.

In 1989, the Environmental Protection Agency issued a ban on most asbestos-containing products. However, this regulation was overturned in 1991, leaving bans on only a few products.

Today, products containing asbestos that could be inhaled are required to be labeled, according to the CPSC. Asbestos that might release fibers is most often found in building products and insulation materials used before the 1970s.

The Occupational Safety and Health Administration lists “asbestos-containing material” as any material containing more than 1% asbestos.

The EWG’s Lunder said that’s not a tough enough standard for health.

“This is an avoidable risk. This is a known carcinogen and our risk standard or threshold for exposure to cancer-causing chemicals in (kids’) toys should be zero,” Lunder said.

The EWG Action Fund is calling for regulatory and policy changes and says there’s a need for sensitive methods to detect asbestos and asbestos-like fibers in consumer products. It also wants to see talc banned from children’s products such as crayons, fingerprint kits and chalk.

“We can’t fight this battle one toy and one company at a time,” Lunder said. “We need to think bigger and need to ensure that protections are permanent.”

Paulson, the pediatrician, also supports additional regulatory action, especially as it has become a recurring issue.

“This issue of asbestos in toys, in particular in crayons, is a problem,” Paulson said. “That was identified 15 years ago.

“The current voluntary standard for protecting children from toxic substances doesn’t work. If we’re going to protect kids, we need to use science and ban substances such as asbestos, where we know there is a huge risk to small exposure.”