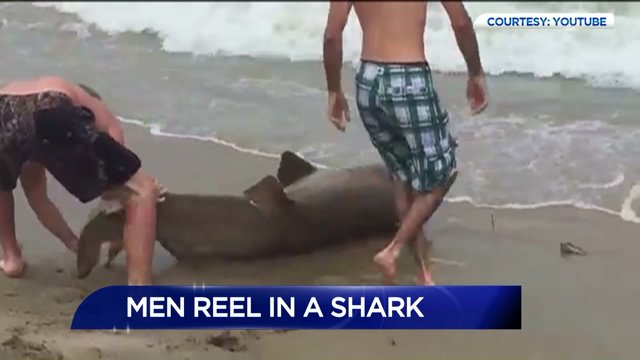 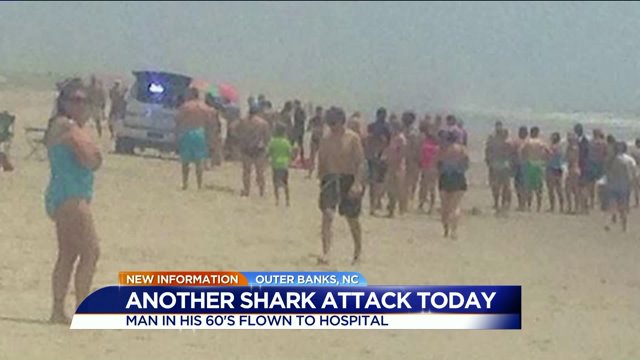 OCRACOKE ISLAND, N.C. -- Another shark attacked was reported on Wednesday off the coast of North Carolina, according to officials. The shark attack happened on Ocracoke Island in the Outer Banks, according to Hyde County EMS. A lifeguard called 911, according to an emergency worker. The victim was taken out of the water and airlifted to a nearby hospital. There is no word on the victim's condition.

Hyde County tweeted a statement, saying "a person swimming at the NPS day use area on Ocracoke sustained a bite from marine life" and the incident is still being investigated. Wednesday's attack marks the seventh incident on North Carolina beaches in June and July. Last year, there were only four reported in the state through the summer.

On Friday, a 47-year-old man was bitten by a shark in the leg and back while trying to get children and another adult out of the water near Avon.

On Saturday, an 18-year-old was swimming with other people near Waves when the shark bit his calf, buttocks and both hands.

Both victims were rushed from the beach and underwent surgery.

In South Carolina, a shark attack also took place Friday morning at Hunting Island State Park. The male victim was taken to Beaufort Memorial Hospital for treatment. No further information was available about the victim or the extent of his injuries.

On Wednesday, an 8-year-old boy in Surf City suffered what appeared to be a shark bite. Police said the wounds were superficial and the injuries were minor.

On June 14, 12-year-old Kiersten Yow from North Carolina and a 16-year-old boy from Colorado both lost their arms in shark attacks at Oak Island.

Yow lost her left arm below the elbow and suffered injuries to her left leg. Hunter Treschl lost an arm.

A 13-year-old girl was bitten while boogie boarding off Ocean Isle Beach on June 11. In that incident, the victim suffered non-life threatening injuries, but the shark took bites of her boogie board.

A person swimming at the NPS day use area on Ocracoke sustained a bite from marine life (still being investigated) ~12:10 p.m. today.

You thought I was kidding pic.twitter.com/nbPbrEgjuY