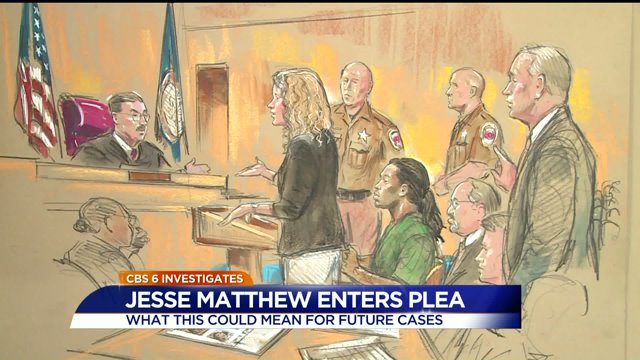 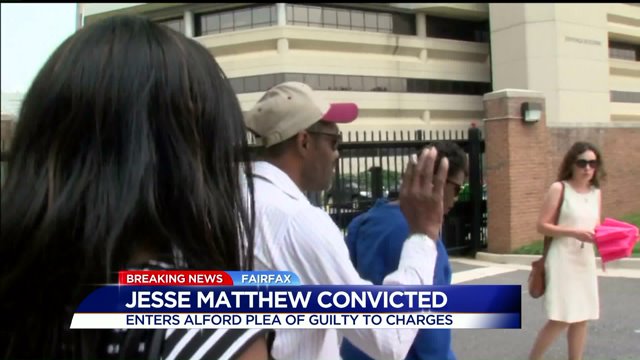 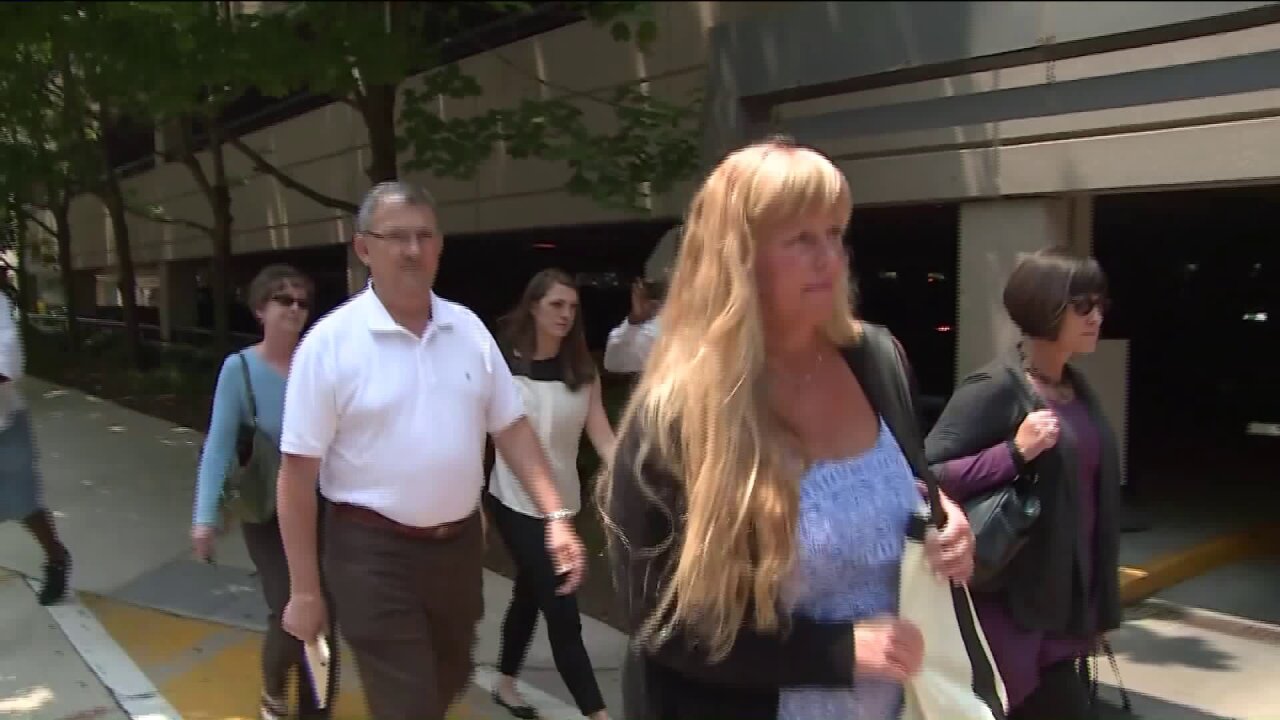 FAIRFAX, Va. -- Jesse Matthew faces life in prison after a Fairfax judge accepted a guilty Alford plea in his capital murder and sexual assault trial Wednesday. The conviction came after the commonwealth's 12th witness, forensic scientist Elizabeth Ballard, testified that there was a one in 7.2 billion chance (world population) that foreign DNA found under Matthew's 2005 victim's right fingernail belonged to someone other than Matthew.

The defense attempted to strike the state's case, citing the Commonwealth had not established that Matthew was the perpetrator of the crimes.  Fairfax County Circuit Court Judge David Schell overruled the motion.

Matthew's parents, sister and girlfriend left the courthouse together.

Fairfax County Commonwealth's Attorney Ray Morrogh emphasized that the state did not offer the Alford plea.

"There was no plea agreement. The Commonwealth can't stop defendants from pleading guilty," Morrogh said. "The defendant pleaded guilty to all of the charges as they stand in the indictment, which means he faces the full range of punishment. No plea agreement in this case."

The plea recognized the prosecution had enough evidence to prove Matthew was guilty beyond a reasonable doubt.

"A lot of defendants do it when they don't want to admit what they did," Morrogh said.

On Sept. 24, 2005 Matthew abducted and raped his victim, identified as "RG" in court, near her Fairfax home.

The jurors, seven men and seven women, sat through two and a half days of testimony from investigators, experts and the victim "RG" herself.

"It was emotional,” juror Willie McDuffy said. “For her to have to relive something that was such a traumatic impact on her life and forever change her, I can only imagine what she is going through."

"I feel very sorry for her, she was violated," juror Brian Ramsey said.

"It was intense because, I have never pretty much had a guy's life in my hands," McDuffy added.

In the end it was science that convinced some jurors that Matthew was guilty.

"Yes, because of the evidence that was shown, the DNA.  It was clearly his DNA," McDuffy said.

"Her testimony was not as important as the evidence," Ramsey said.

McDuffy and Ramsey were disappointed they were not given the chance to render a verdict, but were thankful for the opportunity to serve.

"I wanted to see the whole process and be able to deliberate," said McDuffy.

"I am almost 68 years young, and this will be one of the things I remember for a long, long time," said Ramsey.

"RG" waited almost 10 years for this conviction and traveled from India to testify and be present to see justice served.

"I just came from speaking with the victim, she said she was deeply moved and very grateful to the whole team," Morrogh said.

"RG" will testify before the judge again Thursday, June 18, at 2 p.m., at a hearing at Fairfax County Circuit Court.

"She wants to tell the judge how this has hurt her and affected her entire life, even until this day," said Morrogh.

“I expect that she’s doing it on a separate day for her own convenience because she lives in another country,” Todd Stone, CBS 6 legal analyst said, about why the Fairfax victim will be testifying prior to the actual sentencing date.

Matthew will be sentenced October 2, at 2 p.m, at the Fairfax County Circuit Court.

Matthew has his next hearing in Charlottesville, June 25, where a trial date is scheduled to be set in the Hannah Graham case. Matthew faces the death penalty there where he is charged with the capital murder and sexual assault in the death of the second-year University of Virginia student.

“If they proceed with a capital murder charge in Albemarle, and they find him guilty, these convictions are something that jury can consider for sentencing purposes,” Stone said.

Graham's remains were discovered in October 2014 in Albemarle County after she went missing from Charlottesville's downtown pedestrian mall in September 2014.

Matthew has not been charged in the death of Morgan Harrington. However the slain Virginia Tech student has been linked to Matthew through DNA. Harrington disappeared in October 2009 after leaving a concert at UVa's John Paul Jones Arena.  Harrington was later found murdered. Her body discovered months later on an Albemarle County farm.

"I certainly want a day in court for our daughter," said Morgan's mother, Gil Harrington.

Gil and Dan Harrington traveled to Fairfax this week to attend Matthew's trial.

"I am happy that it's very unlikely this criminal will ever hurt anyone again," said Harrington.

An Albemarle County prosecutor, investigator and detective from the Virginia State Police also attended the trial.