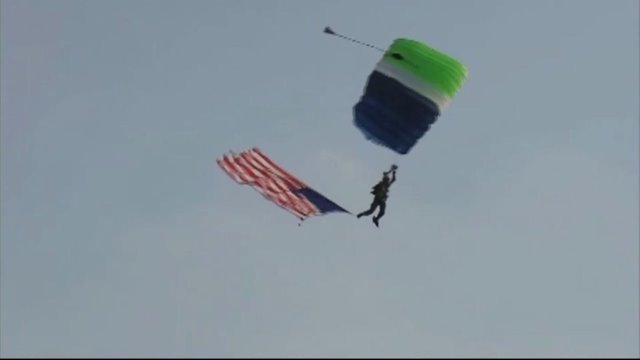 WINCHESTER, Tenn. -- What was supposed to be a patriotic display turned into a harrowing sight when a parachutist crashed into a power line Saturday.

WSMV reports the Vietnam Traveling Memorial Wall was on display at Winchester City Park and a parachute demonstration from veteran jumpers was scheduled as part of Memorial Day festivities.

"We jumped from an airplane at 8,000 feet and attempted to land in the designated area," said Derek Slade, the team captain for the Flying Like You Stole It Parachute team.

"One of the guys pulled up on his chute and a gust of wind caught him and put him into the high tension wires," said Richard Russo, manager for the traveling Vietnam Memorial wall.

He dangled in the wires for a few minutes while the crowd looked on.

"It was scary. He ended up with luck on his side," said Russo. "After he got off the wires, the chute opened up a little bit and broke his fall.

To those watching, it seemed the worse had happened.

"It appeared that he was seriously injured," said Slade. "He just walked away with some cuts and bruises."

Slade said these events are tightly planned, but sometimes the elements get the upper hand.

"As he was coming in, he got a gust of wind. Those power lines are nearly invisible from up above," said Slade. "No matter how much we plan, how professional we are, how experienced we are, people make mistakes. The weather is something we can't predict or change."

The parachutist was dismissed from the hospital Saturday night.

"Miraculously he got up out of the hospital last night and walked away," said Slade.