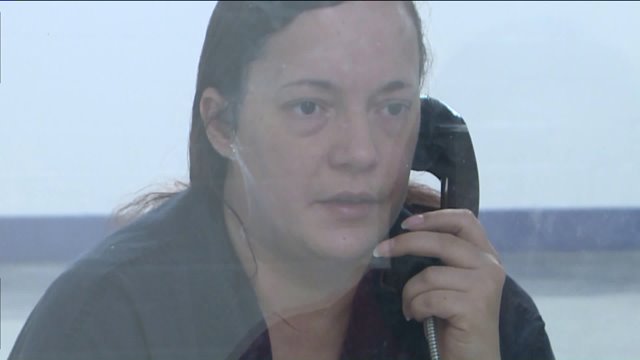 NORFOLK, Va.  -- A Samurai sword was the weapon of choice for one Norfolk woman.

Kristen Emmons used the sword to attempt to rob her two roommates of crystal meth and money, according to the Norfolk Sheriff's Department. Emmons admitted to using the sword, but said she wasn't trying to steal the drugs, she was trying to give them back.

"He [a roommate] had left me in the apartment and so I went into his room and there was a duffel bag in there, and I just threw it out the window," Emmons told WTKR.

Emmons said she wasn't in her right mind when she threw the duffel bag of drugs out the window. Once she realized what she did, she said she feared for her and her family's safety and confided in the first person she saw -- a man on the beach.

"The guy I met on the beach had a Samurai sword and he gave me the sword to protect myself, and he came back with me to my apartment and so I came there to bring the drugs back," she said.

Emmons said when she was back at the apartment, her roommates began attacking her even though she was armed with the sword -- that's how one was injured. She also said the man who gave her the sword got in the middle of the action and was hurt. Court documents paint a different picture.

The search warrant states that Emmons wanted to rob her roommates of drugs and money. It said she started swinging the sword the moment her roommates walked in, also striking the man who gave her the sword in the calf.

Her roommate declined medical attention, but the man who owned the sword had to get 10 stitches. Emmons admitted that she should have just called the police, but said at the time she did not think it was an option.

"I guess the best idea would have been for me to bring the drugs back and leave them at the apartment. Now that I think of about it afterwards, I could have gone about it differently. I just felt like I had to protect myself. I didn't know what was going to happen," Emmons said.

Emmons was taken into custody and has been at the Hampton Roads Regional Jail since the incident. She is scheduled to appear in court in June.