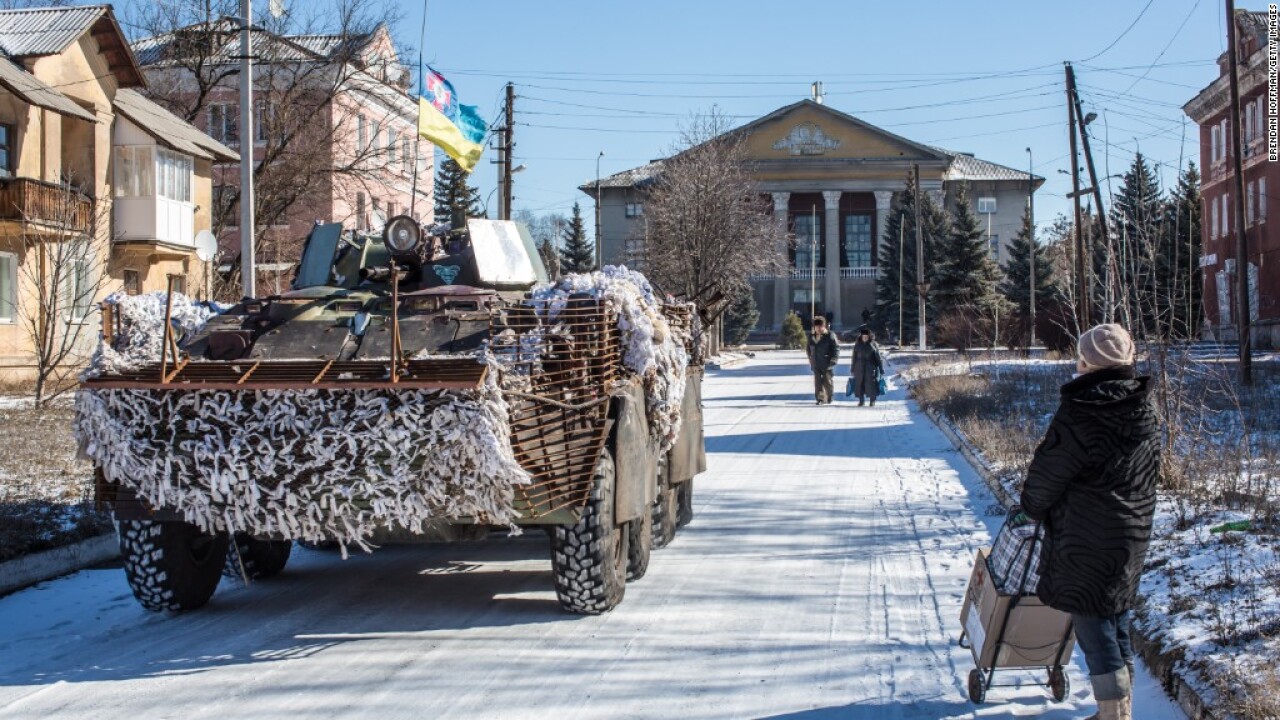 UKRAINE — Ukraine’s military said Wednesday that 80% of Ukrainian armed forces have now pulled out of a strategic railroad hub that’s been the focus of bitter fighting with pro-Russian separatists. The two sides have been battling for weeks for control of Debaltseve, and continued conflict there has undermined a truce that apparently went into effect Sunday, raising concerns it is all but dead. The ramifications for the West are huge because the 10-month-long conflict in eastern Ukraine has hiked tensions with Russia to a level not seen since the end of the Cold War, affecting trade and raising the specter of Russian expansion into Eastern Europe.

CNN’s Nick Paton Walsh called the loss of Debaltseve a huge blow to the Ukrainian government and a win for the separatist militants, who regarded it as already their territory when the front lines for the ceasefire were drawn. It’s not yet clear how Kiev will respond.

Ukrainian President Petro Poroshenko, in a taped statement, said Ukrainian armed forces in the area had left Debaltseve according to plan.

“They left with military vehicles, tanks, armored personnel carriers, artillery pieces and military trucks with personnel on them,” he said.

Poroshenko said he had asked to speak with U.S. and EU leaders, and he urged a “tough” response by the world to Russian activity.

The President said he was now on his way to the front line to meet with some of the soldiers who have pulled back. “I will be honored to shake their hands,” he said.

Ukrainian defense spokesman Andriy Lysenko told a Kiev news conference that the “organized retreat” from Debaltseve should be complete “within hours.”

The official news agency of the self-proclaimed Donetsk People’s Republic, DAN, earlier quoted separatists as saying there had been a large handover of weapons to the separatist forces in Debaltseve.

CNN’s Paton Walsh, who is in the Debaltseve area, said deserted roads in the area are strewn with the wreckage of what, only hours earlier, were Ukrainian military positions.

A CNN team passed a checkpoint that had been obliterated, as well as an armored personnel carrier that appeared to have been hit by a large explosion. The bodies of two Ukrainian soldiers could be seen there.

Only kilometers away from Debaltseve, the kind of intense shelling that would be expected if the town were still being bitterly fought over could not be heard.

It’s not clear where the civilians who were trapped by the conflict will go now, Paton Walsh said. The separatists have said they may try to evacuate them later, he said, but they would have to pass through areas that are still contested.

Lavrov: Don’t use Debaltseve as an excuse to derail peace process

Russian Foreign Minister Sergey Lavrov told a news conference in Moscow that Russian President Vladimir Putin had tried to highlight the danger to thousands of Ukrainian troops encircled in Debaltseve before the ceasefire agreement was signed, but that Poroshenko had denied they were trapped.

The main goal now must be to save the troops’ lives, he said.

Lavrov suggested that outside Debaltseve, the weekend ceasefire had taken hold. “Across all conflict lines we can see hostilities have ceased heavy armor started to be moved,” he said.

He urged Kiev and the West not to try to use the situation in Debaltseve as “an excuse to derail the process,” saying such excuses had been used in the past to hinder peace efforts.

The Organization for Security and Cooperation in Europe, which is tasked with monitoring the ceasefire and a supposed withdrawal of heavy weapons by both sides to create a buffer zone, has not been able to gain access to Debaltseve because of the continued conflict.

The chief monitor of the OSCE monitoring mission in Ukraine, Ambassador Ertugrul Apakan, said Tuesday that he was “profoundly disturbed” by reports from the town. His monitors plan to try to gain access again Wednesday.

“I am especially concerned about the civilian population of the town,” said Apakan. “The sides have a duty to them as well, and to each other to adhere strictly to the ceasefire.

“I condemn any attempts to create new facts on the ground, and so to change the basis on which the latest package of measures has been agreed.”

He pointed the finger at the separatist leaders in Donetsk and Luhansk, saying that they had effectively denied the OSCE monitors access to Debaltseve, and urged them to end their offensive and allow “unfettered access.”

European Union foreign policy chief Federica Mogherini said Wednesday that the separatists’ actions in Debaltseve were “a clear violation of the ceasefire” and called for the OSCE observers to be allowed in.

“The separatists must stop all military activities. Russia and the separatists have to immediately and fully implement the commitments agreed to in Minsk,” she said.

“The EU stands ready to take appropriate action in case the fighting and other negative developments in violation of the Minsk agreements continue.”

Diplomats in New York scrambled Tuesday to shore up the shaky ceasefire agreement, hammered out by the leaders of Ukraine, Russia, France and Germany on February 12 in Minsk, Belarus.

The United Nations Security Council unanimously approved a resolution calling on all parties to abide by the truce, and issued a statement expressing “grave concern at the continued fighting in and around Debaltseve, Ukraine, which has resulted in numerous civilian casualties.”

In a call with Poroshenko, the Ukrainian President, U.S. Vice President Joe Biden “strongly condemned the violation of the ceasefire by separatist forces acting in concert with Russian forces” in Debaltseve, according to a White House readout.

Biden also agreed with Poroshenko that if Russia continues to violate the Minsk agreements, “the costs to Russia will rise.”

Lavrov dismissed Biden’s words as “just another example of how the American position is not constructive.”

Russia has steadfastly denied allegations by Kiev and the West that it is sending heavy weaponry and troops over the border into eastern Ukraine.

In the beleaguered village of Shyrokyno, Ukrainian forces struggle to keep control of territory.

“Right now, only about a third of the village is under our control,” a machine gunner named Yury told CNN’s Frederik Pleitgen a day earlier.

“The fighting is continuing now the way it did before,” Shiryayev told Pleitgen. “They continue to attack us, shell us; they use artillery, mortars.”

But it’s impossible to tell which side is responsible for breaking the ceasefire in Shyrokyno.

To some residents, it doesn’t matter.

“The fighting is very heavy. All the windows (of) our house are broken,” one woman said. “It is very terrifying. We saved all our lives to buy our house, and now we have nothing.”