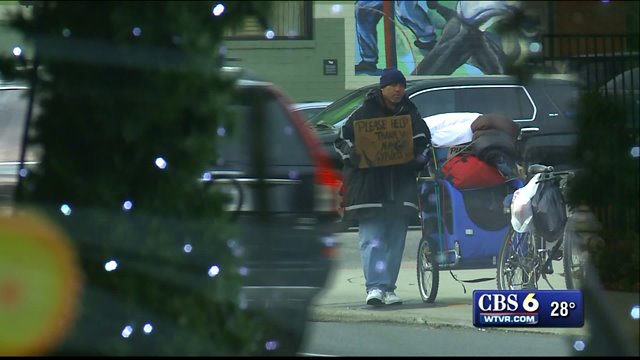 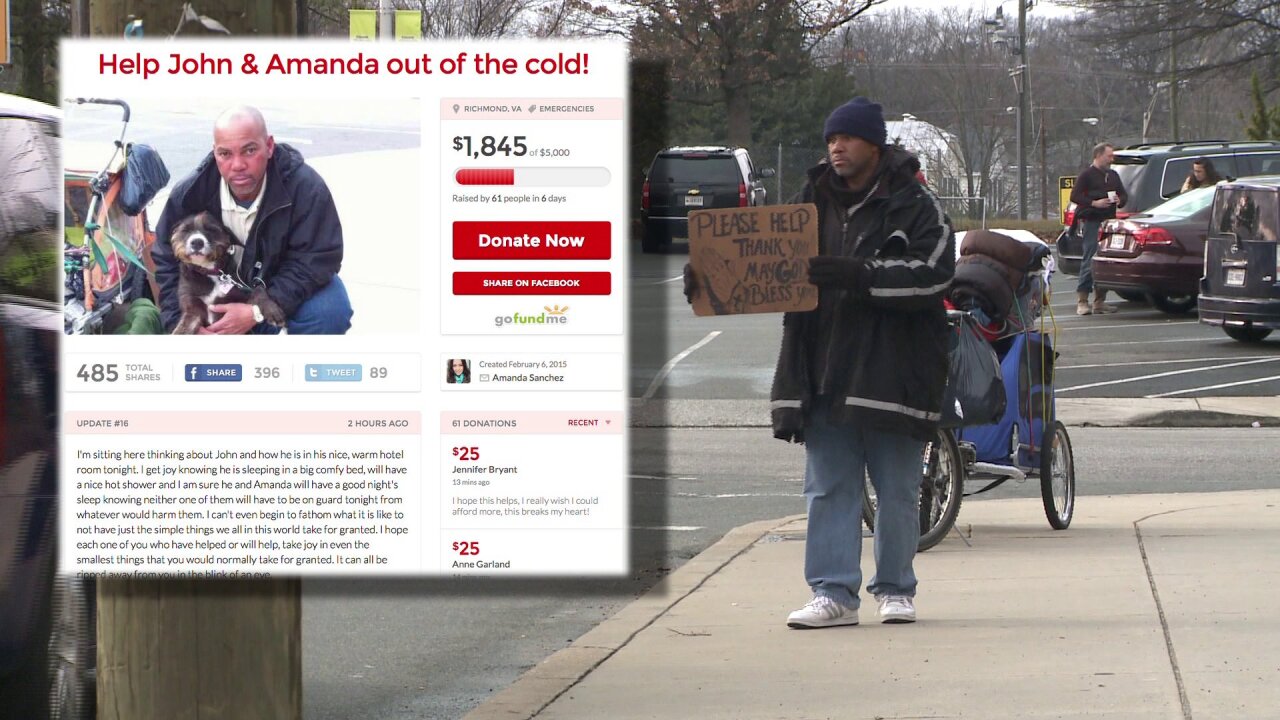 RICHMOND, Va. -- When it comes to homeless people flying signs on Richmond street corners, few get as much attention as John McNealy.

Not only is he in a prime spot – the corner of Elwood and Thompson in the upscale Carytown shopping district – he has become known for his faithful dog, Amanda, and the devotion and care he gives her.

He is known to save up his donations so she can be in doggy day care. On the nights he can afford to get room at the midtown Comfort Inn, they know Amanda will be staying too.

Motorists regularly drop by treats for her. On Wednesday, one driver handed out a bag with a quilted jacket for Amanda and hand warmers for John.

He’s a guy I knew a bit several years ago, when he worked washing dishes and doing a little cooking in places my friends and I frequented.

We heard about him getting badly banged up, apparently by a hit-and-run driver. The details were sketchy.

He says he was in a coma for three days, and just lost his place in the world. The hospital bills were huge, with no one to pay them, he said. He had a brain injury, he said, and he lost his job at Sticky Rice and then his apartment. “I lost everything I had. And I wound up out here.”

I tried to get details on the incident from Richmond police, but it may not have been reported.

Being on a high-profile corner makes John a bit of a target. There are those who say he’s too well-dressed, too well-provisioned. He just shrugs it off, saying he dresses the way he always did - tidy. Just because he lost his place in life, he said, doesn’t mean he lost his pride. Because laundering can be problematic, he buys fresh wardrobes and shoes at the thrift stores for pennies on the dollar – sort of a poor man’s Jack Reacher.

And so old man winter has marched again – John’s second on that corner.

Young Lauren Dougherty had seen him several times, thinking someone would stop and help the man with the dog.

In December, she decided it had to be her. “It was like 20 degrees, freezing rain,” she recalled. “He was standing outside, soaking wet, shivering, just holding a sign. That’s it. I’ve got to do something about this.”

She stopped several times and got to know him. She bought him dinner. She empathized. Years ago she had lost her job and her place and had to sleep in her little Pontiac for two days.

Lauren posted about John on Facebook, how she wanted to help. “Next thing I know, it’s blowing up on Facebook.”

Among those answering the call was her childhood friend, Amanda Sanchez. They had gone to elementary school together. “Sleepovers left and right. Jammed out to Spice Girls,” Lauren recalled. “And then life got in the way.”

They hadn’t seen each other in 10 years when they got together to help John and Amanda.

“I weighed heavy on my heart,” said Amanda, a no-nonsense person who quickly set up a GoFundMe “Help John & Amanda out of the cold” campaign. And then they started pushing it on social media with great energy and focus.

The plan isn’t to give John the money, they said. They’re networking with social services providers to find the best way to find the right space, pay his rent and do the follow-up so he can find employment and position himself so he and Amanda can have a long-lasting home.

Kelly Horne, the executive director of Homeward, an umbrella social services agency dedicated to ending homelessness, said this kind of person-to-person involvement and follow-through is what works, instead of handing a donation out of a passing car.

“It’s awesome,” she said. “The personal touch . . . as citizens, we have to step up, too” to help address the underlying issues that can hold an individual in a homeless state.

John can hardly believe it. He calls Lauren and Amanda and another young woman, Kelley Quinn (who said she is merging a similar GoFundMe campaign) his angels.

He said that’s all he wants – a homelife for he and his dog – and a chance to do for someone else what these strangers are trying to do for him.

“They’re not even asking for anything,” he said. “It’s touching, man.”