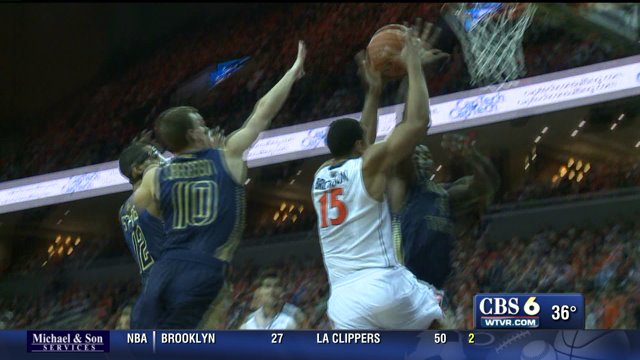 CHARLOTTESVILLE, Va. -- The Virginia Cavaliers extended their home winning streak in historic fashion, beating Georgia Tech 57-28 on Thursday night at the John Paul Jones arena. The 28 points by the Yellow Jackets were the lowest in an ACC regular season game, and tied for the 5th lowest by a team in any ACC game. It was also Tech's lowest output since 1948.

Georgia Tech's 28 points is the lowest point total in an ACC regular season game EVER!!!!

“I think we knew how important it was to limit Georgia Tech to one chance. I think holding them at bay with those second chance points was significant," said Virginia head coach Tony Bennett. "We really worked on playing good ball screen defense and contesting their shots. That combination helped us. There are still areas to improve, but I liked how we rebounded.”

Malcolm Brogdon scored 13 points, the only player to reach double figures. But the Cavaliers lack of offense was all but ignored by their incredible defensive effort.

“We weren’t great in the first half," Bennett said. "The ball was sticking and we were forcing things a bit. In the second half, we started running our offense with ball movement and pace, and got good looks.”

“I think in stretches we played really good defense and for a majority of the second half we had guys locked in," said UVA junior forward Justin Anderson. "We want to try to put our best defensive effort out there every night and I feel like we did a great job doing that [tonight].”

“I give Virginia credit. In the first half, I thought it was back and forth a bit," said Georgia Tech head coach Brian Gregory. "We had some opportunities to keep the lead to single digits and I thought their defense was very good in the first half. They did a very good job of keeping us off the offensive glass, but in the second half it was another level. They did a really good job. They make it so you have to make every open shot, and we struggled to make open shots tonight. We struggled against their overall defense. The one thing they have done all year long is that, even when they’re not scoring, they play the same defense every time. In this day and age to play that type of defense without always getting the reward on offense is credit to Tony Bennett and his staff.”

UVA's home winning streak is now at 21 games, the 7th longest active streak in the nation. They will travel to Virginia Tech for a sold out game on Sunday, then return to the JPJ next Saturday night to host 5th ranked Duke.