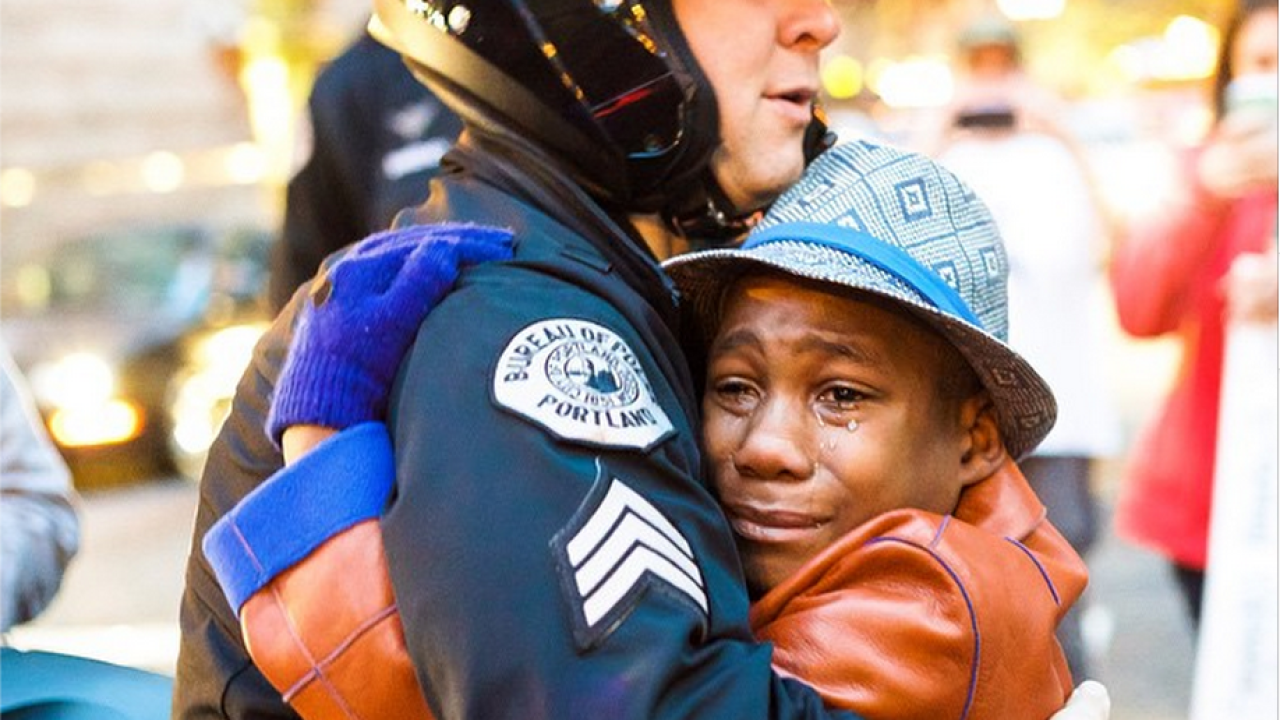 http://instagram.com/p/v9cZc7QRE7/ chambersvisuals — I want to thank everyone who shared my photo today!!! You guys are playing a great role in spreading the message of hope and humanity as seen here in the photo of Sgt. Barnum and Devonte Hart. I also want to thank @theoregonian for being the first to publish my photo and writing the incredible story behind it. You guys are the best. I don’t really use Twitter but now I have a reason to. Follow me on Twitter

It’s the picture we needed to see after a week like this.

A 12-year-old black boy, tears streaming down his face, and a white police officer embrace in the middle of a Ferguson-related demonstration in Portland, Oregon.

The boy, Devonte Hart, was holding a sign offering “Free Hugs” during a Tuesday protest over a grand jury’s decision not to indict Ferguson police Officer Darren Wilson in the death of 18-year-old Michael Brown.

“He asked Devonte why he was crying. His response about his concerns regarding the level of police brutality towards young black kids was met with an unexpected and seemingly authentic (to Devonte), ‘Yes. *sigh* I know. I’m sorry. I’m sorry.’ The officer then asked if he could have one of his hugs,” Hart wrote, according to the Oregonian.

The Oregonian was the first media outlet to publish the photo by 20-year-old freelance photographer Johnny Nguyen. Within hours of its posting on Facebook, the photo had been shared more than 150,000 times, according to the Oregonian.

Nguyen told CNN he attended the rally to take pictures for himself.

“When I came across Devonte, who was holding a ‘Free Hugs’ sign and tears running down his face, I knew right there and then there was something special about him,” he said. “My gut told me to stay at the scene despite other photo opportunities in the crowd.”

Nguyen captured a few snaps of Devonte, then turned around to get some shots of other people. When he turned back, he saw Devonte speaking to Barnum.

“I thought, what a great scene. A powerful scene. A scene with a message that needed to be communicated. A scene of coming together,” he said.

“They hugged it out, and I got as close as I could, and snapped away.”

The photo “spread like wildfire” in a day. Since then, Nguyen said, he has received hundreds of emails and messages saying how the photograph made people feel more hopeful, that it restored faith in humanity or brought them to tears.

“I knew it had something special, something powerful. It had a message I think everyone wanted to see,” he said.

“I think it goes to show everybody was clamoring for hope in the midst of the violence and conflict going on today. I’m glad my photo has done that. Yes, I’m a photographer, but in the end, I’m a human being who wants better for other human beings, and I’m glad I can play my part by sharing the incredible photo. I wish to see everyone continue to be positive, and spread love, always.”