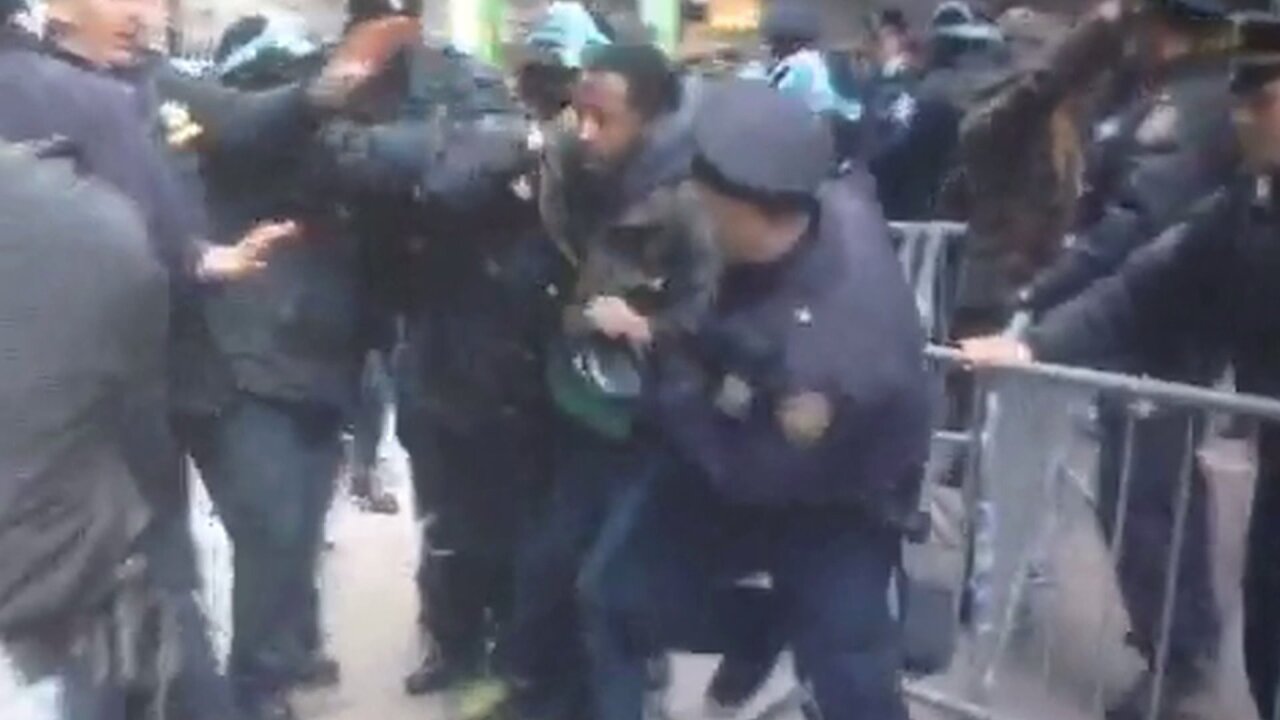 FERGUSON, Missouri -- Perhaps it was the biting cold, or maybe it was because of Thanksgiving. But Ferguson was much calmer early Thursday than it has been the past two days.

A few dozen protesters showed up outside police headquarters in Ferguson late Wednesday night. And standing underneath a "Seasons Greetings" sign stretching over the road, they fired obscenities at National Guard members who stood on watch outside the police department's offices.

But there were no incidents, no confrontations between the two sides. Police made just two arrests, and no injuries or damages were reported.

A protest organizer told CNN that even though the numbers were small early Thursday morning, demonstrators will return night after night as they have done since the summer when Michael Brown, a black teen, was shot dead by Darren Wilson, a white police officer.

Nationwide, protests continued, but they too were peaceful for the most part. In Los Angeles, police arrested 130 protesters on misdemeanor charges of failure to disperse. In Oakland, California, police arrested 35 people for a variety of charges related to protests.

For his part, Wilson is in talks to leave the Ferguson Police Department and may give up being an officer altogether.

"Realistically, he can't go back to being a police officer. He knows that. There's no illusion about any of this."

Wilson has said he killed the 18-year-old Brown out of fear for his life during their encounter on August 9. He maintains he hasn't done anything wrong.

Though he hasn't said much, Wilson sympathizes with Brown's family, his lawyer said.

"His remorse and his sadness about what happened is there, and it's real," Bruntrager told CNN.

"But in respect to the Browns, he's been very careful to sort of stand back. He knows that whatever he says, it's not going to be read as he means it."

Brown's parents don't believe Wilson's version of events, telling CNN's Sonny Hostin their son would never have taunted the officer nor reached for his weapon

Michael Brown's mother says hearing that a grand jury had decided not to indict the officer who killed her son felt like getting shot.

"We heard this and it was just like, like I had been shot. Like you shoot me now -- just no respect, no sympathy, nothing," Lesley McSpadden told Hostin on Wednesday. "This could be your child. This could be anybody's child."

Back in Ferguson, a one-mile stretch of West Florissant Avenue, the site of previous protests, was closed to cars and pedestrians, with authorities saying the burned-out buildings on the route are crime scenes.

One of those buildings is Flood Christian Church, of which Michael Brown Sr. is a member.

The Bureau of Alcohol, Tobacco, Firearms and Explosives is leading the investigation into the fire that destroyed the church, a spokesman said.

Investigators have found that someone broke into the church and the fire began in a foyer near the doors that were breached, the ATF spokesman said.

The church is some distance away from the strip of stores that burned Monday. Other structures nearby were untouched, which is cause for suspicion, the spokesman said.

Also Wednesday, Ferguson police were looking for clues as to who stole an AR-15 that was locked in a rack and plucked from a police car torched by rioters this week.