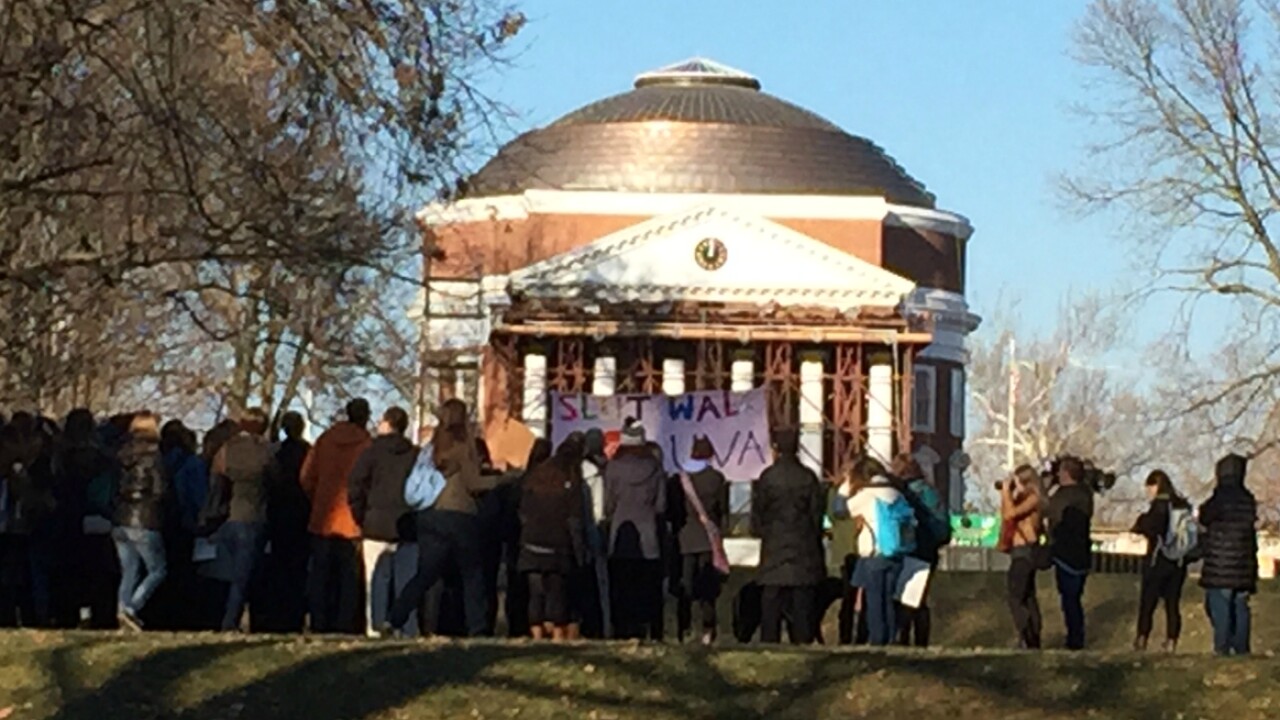 Slut Walk at the University of Virginia (PHOTO: Greg McQuade)

UPDATE: The student-led news conference ended at about 10:30 a.m. Watch CBS 6 News at Noon for a live report.

CHARLOTTESVILLE, Va. — The University of Virginia is suspending all fraternities and associated parties until January 9 following a Rolling Stone magazine article that described a student’s account of being gang raped and her frustration at trying to bring her alleged attackers to accountability.

“The wrongs described in Rolling Stone are appalling and have caused all of us to re-examine our responsibility to this community,” school President Teresa A. Sullivan wrote in a statement to the university community. “Rape is an abhorrent crime that has no place in the world, let alone on the campuses and grounds of our nation’s colleges and universities.”

Student leaders will hold a news conference at 10 a.m. Monday on the campus to “give voice to the student perspective,” according to a Student Council news release. Participants include the Student Council president, the leader of the Inter-Fraternity Council and the presidents of One in Four and One Less, support groups for victims of campus sexual abuse.

Rape is a longstanding issue on college campuses, but in recent years student activists, survivors and faculty have portrayed sexual violence as a cultural problem on campuses nationwide — not just a series of isolated incidents. In September, President Barack Obama launched “It’s On Us,” a campaign aimed at tackling the problem of campus sexual assaults.

“There are individuals in our community who know what happened that night, and I am calling on them to come forward to the police to report the facts,” Sullivan wrote. “Only you can shed light on the truth, and it is your responsibility to do so.”

In “A Rape on Campus: A Brutal Assault and Struggle for Justice at UVA,” the student told Rolling Stone an upperclassman invited her to a party at the the Phi Kappa Psi house in fall 2012 and seven men raped her over a three-hour period in a bedroom

She didn’t want to go to law enforcement but told the school’s Sexual Misconduct Board what happened, Rolling Stone reported.

She said she became discouraged because she had difficulty obtaining statistics about campus sexual assaults and learned other students said they were raped at fraternities but with little or no discipline handed out, the magazine said.

Slut Walk at the University of Virginia (PHOTO: Greg McQuade)

RELATED: Hundreds take part in ‘Slut Walk’ at the University of Virginia

The article said, “At UVA, rapes are kept quiet, both by students — who brush off sexual assaults as regrettable but inevitable casualties of their cherished party culture — and by an administration that critics say is less concerned with protecting students than it is with protecting its own reputation from scandal.”

Rolling Stone said the school didn’t decide to investigate the fraternity until administrators learned the magazine planned to write an article.

The journalist who wrote the story, Sabrina Rubin Erdely, said Sunday on CNN that the student she interviewed, identified in the article as Jackie, was still traumatized but that the national response “has been really gratifying for her.”

After the first story ran, other students contacted Rolling Stone to say they’d also been sexually assaulted at the University of Virginia. Those responses ran in a story with the headline “Rape at UVA: Readers Say Jackie Wasn’t Alone.”

Students will be on their Thanksgiving and winter holiday break during much of the fraternal organization suspension. Classes for the spring semester start January 12.

Sullivan said she was “suspending all fraternal organizations and associated social activities.”

Before the suspension is lifted, the school will assemble students, faculty, alumni and others to talk about “our next steps in preventing sexual assault and sexual violence,” Sullivan said. She also said the university’s board of visitors will meet Tuesday to discuss the situation.

The school has 21,238 students total, about 15,000 of them undergraduates, according to the school website.

The fraternities and sororities are on private property, so the members living in the houses will not have to seek new living arrangements during the suspension, de Bruyn said.

The university is also hiring an attorney to review the school’s policies on handling sexual assault complaints.

The national office of Phi Kappa Psi issued a statement decrying all forms of violence but noting that, “to our knowledge there have been no criminal investigations or charges of sexual assault brought against any member of the chapter.”

It said the UVA chapter will respond to authorities. “Phi Kappa Psi will fully cooperate with the administration of the University of Virginia in identifying and immediately eradicating any alleged or proven misconduct,” the statement said.