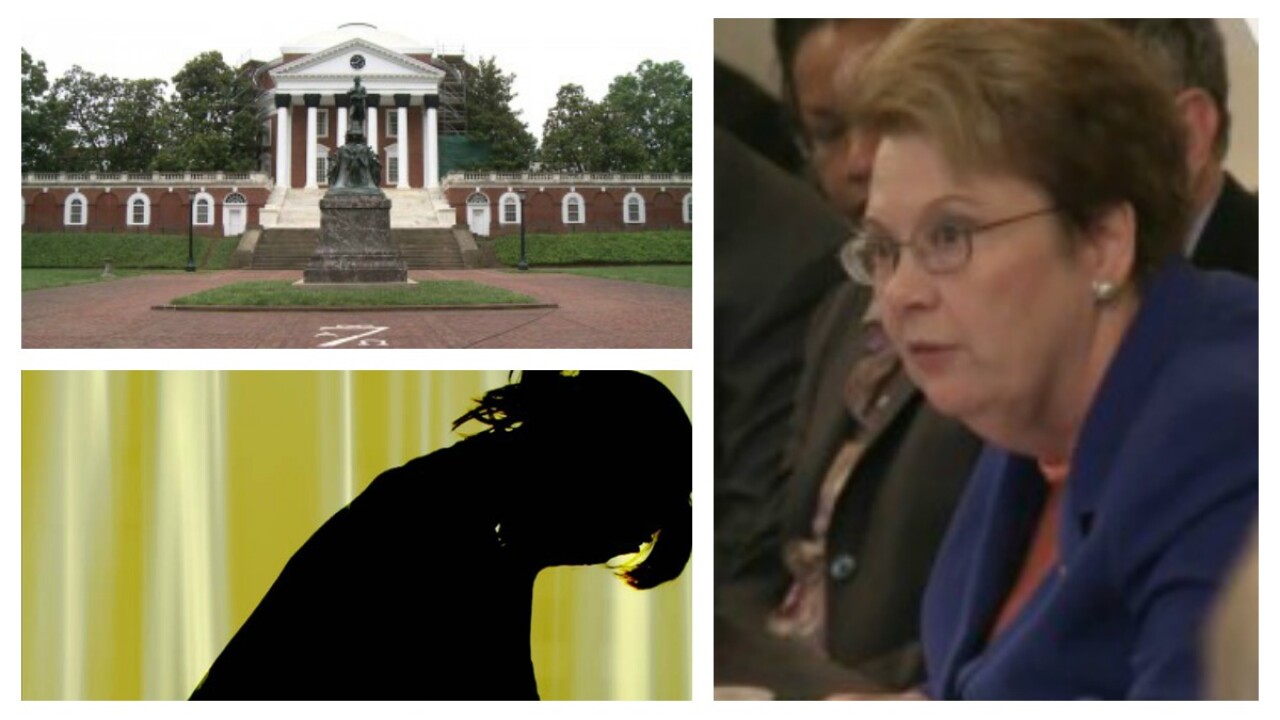 University of Virginia President Teresa A. Sullivan issued a  statement Wednesday evening, in regard to an article published on Rolling Stone’s website earlier in the day.

The article begins with the story of Jackie, who graphically details how she was raped over three hours in the dark at the Phi Kappa Psi fraternity house, in what was a pledge moment for some brothers. Jackie then describes fleeing the frat house and seeking the solace of her friends. This part is equally graphic and hard to handle; Jackie, along with her friends, weighed her options and decided not to report the rape.

Their other two friends, however, weren’t convinced. “Is that such a good idea?” she recalls Cindy asking. “Her reputation will be shot for the next four years.” Andy seconded the opinion, adding that since he and Randall both planned to rush fraternities, they ought to think this through. The three friends launched into a heated discussion about the social price of reporting Jackie’s rape, while Jackie stood beside them, mute in her bloody dress, wishing only to go back to her dorm room and fall into a deep, forgetful sleep. Detached, Jackie listened as Cindy prevailed over the group: “She’s gonna be the girl who cried ‘rape,’ and we’ll never be allowed into any frat party again.”

But now in her third-year, and perhaps after the spotlight put on the University and surrounding town of Charlottesville after the abduction and homicide of student Hannah Graham, Jackie decided to share her story with more people.  More than a year ago she reported the gang-rape allegations to a UVa. dean, according to Rolling Stone, but no official report was made.

But I said, ‘UVA has flown under the radar for so long, someone has to say something about it, or else it’s gonna be this system that keeps perpetuating!’ ” Jackie frowns. “My friend just said, ‘You have to remember where your loyalty lies.'”

In Sullivan’s response (posted in its entirety below) she notes that the University recently adopted several new initiatives and policies aimed at fostering a culture of reporting and raising awareness of the issues.

The Rolling Stone article points out the necessity of a new culture at the University:

But like most colleges across America, genteel University of Virginia has no radical feminist culture seeking to upend the patriarchy. There are no red-tape-wearing protests like at Harvard, no “sex-positive” clubs promoting the female orgasm like at Yale, no mattress-hauling performance artists like at Columbia, and certainly no SlutWalks. UVA isn’t an edgy or progressive campus by any stretch. The pinnacle of its polite activism is its annual Take Back the Night vigil, which on this campus of 21,000 students attracts an audience of less than 500 souls. But the dearth of attention isn’t because rape doesn’t happen in Charlottesville. It’s because at UVA, rapes are kept quiet, both by students – who brush off sexual assaults as regrettable but inevitable casualties of their cherished party culture – and by an administration that critics say is less concerned with protecting students than it is with protecting its own reputation from scandal. Some UVA women, so sickened by the university’s culture of hidden sexual violence, have taken to calling it “UVrApe.”

Sullivan writes that the alleged sexual assault of the woman, identified by Rolling Stone as Jackie, at a fraternity house in September 2012, includes many details previously not disclosed to University officials.

“I have asked the Charlottesville Police Department to formally investigate this incident, and the University will cooperate fully with the investigation,” Sullivan writes.

The Rolling Stone article chronicling “administrative cover-up and apathy” towards rape at UVa can be  read here.

University of Virginia President Teresa A. Sullivan’s full statement is below.

To the University community:

I am writing in response to a Rolling Stone magazine article that negatively depicts the University of Virginia and its handling of sexual misconduct cases. Because of federal and state privacy laws, and out of respect for sexual assault survivors, we are very limited in what we can say about any of the cases mentioned in this article.

The article describes an alleged sexual assault of a female student at a fraternity house in September 2012, including many details that were previously not disclosed to University officials. I have asked the Charlottesville Police Department to formally investigate this incident, and the University will cooperate fully with the investigation.

The University takes seriously the issue of sexual misconduct, a significant problem that colleges and universities are grappling with across the nation. Our goal is to provide an environment that is as safe as possible for our students and the entire University community.

We have recently adopted several new initiatives and policies aimed at fostering a culture of reporting and raising awareness of the issues.

We want our students to feel comfortable coming forward with information when there are problems in the community and cooperating with local law enforcement and the student disciplinary process. We also want them to feel empowered to take action and to lead efforts to make our Grounds and our community a better place to live and learn.

We have been taking a leadership role on issues regarding sexual misconduct and violence. U.Va. hosted a national conference on this topic in February 2014. “Dialogue at U.Va.: Sexual Misconduct Among College Students” brought together national experts and professionals from approximately 60 colleges and universities to discuss best practices and strategies for prevention and response.

The HoosGotYourBack initiative, part of the Not On Our Grounds awareness campaign, was developed and launched in collaboration with students and with local Corner merchants to increase active bystander behavior.

A number of other initiatives are also planned for the spring. Among them are the implementation of a new student sexual misconduct policy and a related training program, a campus climate survey and an in-depth bystander intervention program that will include students, faculty and staff.

More information about sexual violence education and resources is available on the University’s website at http://www.virginia.edu/sexualviolence/.

Finally, I want to underscore our commitment to marshaling all available resources to assist our students who confront issues related to sexual misconduct. Our dedicated Student Affairs staff devote countless hours to educating and counseling our students on issues regarding their health and safety, and they stand ready to assist whenever students need help.