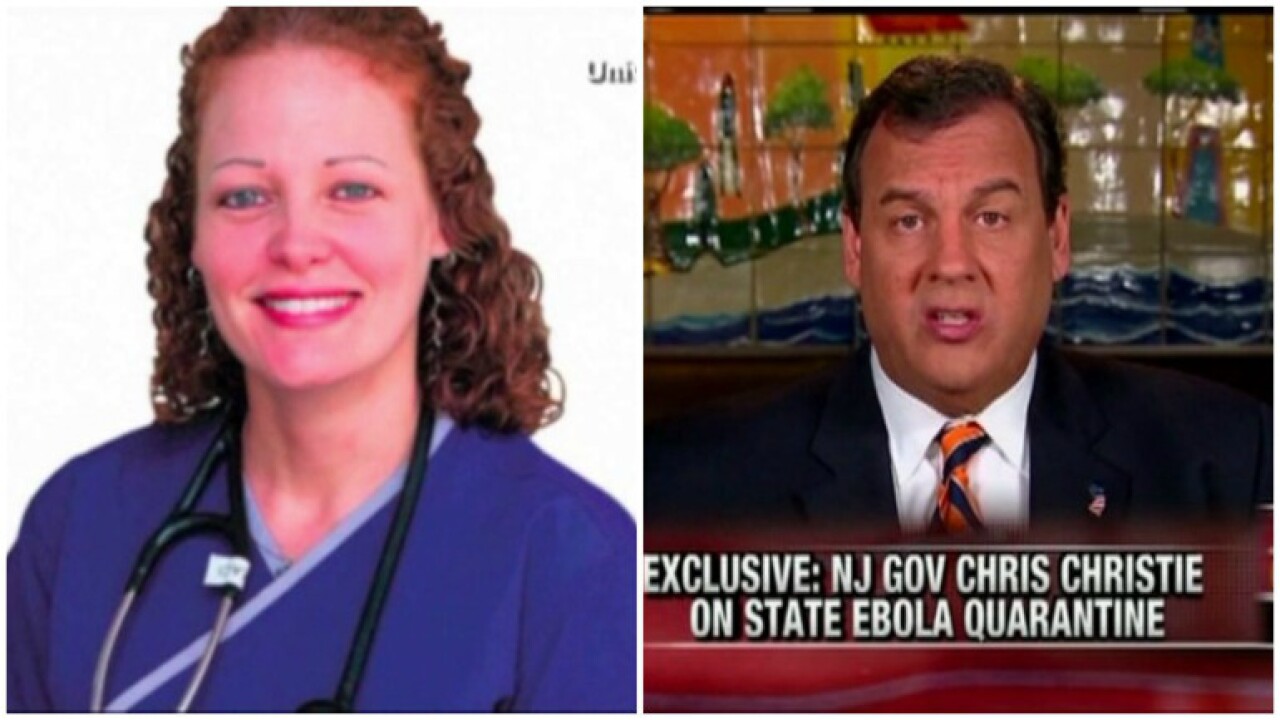 A battle of words broke out Sunday between the nurse, who returned home from Ebola-ravaged West Africa only to be ordered into quarantine, and the governor, with the nurse telling CNN that her “basic human rights have been violated” and that Christie himself was responsible.

Nurse Kaci Hickox was the first medical professional to be quarantined in New Jersey immediately upon returning to the United States from West Africa, where she had worked in treating Ebola patients.

She lashed out at Christie for giving her a diagnosis of sorts as “obviously ill.”

“First of all, I don’t think he’s a doctor; secondly, he’s never laid eyes on me; and thirdly, I’ve been asymptomatic since I’ve been here,” Hickox told CNN’s Candy Crowley in a phone interview Sunday.

“There always needs to be a balance, because I also want to be treated with compassion and humanity,” Hickox said on CNN’s “State of the Union” by phone from her hospital isolation. “I don’t feel like I have been treated that way in the past three days.”

In an off-camera interview with CNN Senior Medical Correspondent Elizabeth Cohen, Hickox added, “I am not, as he said ‘obviously ill.’ I am completely healthy and with no symptoms. And if he knew anything about Ebola he would know that asymptomatic people are not infectious.”

Hickox also slammed Christie and other officials for trying to make public health decisions without any professional medical expertise.

The White House seemed to agree with Hickox’s sentiment that Christie doesn’t have the medical authority to impose regulations that trump federal guidelines on handling Ebola patients.

A senior administration official told CNN Sunday that the White House informed Christie and New York Gov. Andrew Cuomo — who also ordered quarantine for people returning to his state from West Afrida — along with other state officials that it “has concerns with the unintended consequences of policies that are not grounded in science may have on efforts to combat Ebola at its source in West Africa.”

But a Christie spokesman told CNN that the White House had not contacted the governor nor the Christie administration about the quarantine policy.

Cuomo softened the New York stance considerably Sunday night, with his administration releasing a statement saying “a health care professional … or citizens who are returning or coming to the US who had exposure to infected people will be asked to remain in their homes for a 21 day period.” Health of those persons will be monitored by twice-a-day checks, the statement said.

Those coming from affected areas but not in contact with infected people “will be monitored on a less rigorous basis.”

And Cuomo added that if employers don’t pay quarantined workers for the time they are absent, “the government will.”

That was a major shift in at least tone from the joint statement Cuomo and Christie issued Friday night, which referred to “mandatory quarantine for any individual who had direct contact with an individual infected with the Ebola virus” including health care workers.

At a news conference, de Blasio commented briefly on Hickox’s case, saying that “what happened to her was inappropriate.”

“This hero was treated with disrespect and was not given a clear direction,” he said. “We owe her better than that, and all the people who do this work, better than that.”

After being tested for a fever using a forehead thermometer, it was determined at Newark airport on Friday that Hickox had a fever, and thus was subject to the mandatory health care worker quarantine. But Hickox said the result was “an instrument error.”

“They were using a forehead scanner, and I was distressed and a little bit upset and so my cheeks were flushed,” Hickox explained to CNN’s Crowley.

“And I believe that there is some evidence that machine is not very accurate in these kinds of situations. So when I arrived in the isolation unit they took my temperature orally and it was normal,” said Hickox, who also said that her temperature continued to remain normal following the oral test.

Christie, along with New York’s Cuomo and Chicago Mayor Rahm Emanuel, said that the mandated quarantine is intended to protect public health, citing evidence that health care workers traveling from West Africa pose the greatest Ebola threat to their constituencies.

Quarantine measures were instituted by the officials in response to a returned health care worker who tested positive for the virus last week, after having been out and about in New York City public spaces.

That volunteer — Dr. Craig Spencer — was in serious but stable condition at a New York hospital on Sunday.

Christie — who embraces his reputation as a straight-talker — candidly defended his decision to impose the mandatory quarantine for health care workers, saying he had “no second thoughts.”

“I believe that folks who want to take that step and are willing to volunteer also understand that it’s in their interest and the public health interest to have a 21-day (quarantine) period thereafter if they’ve been directly exposed to people with the virus,” Christie said on Fox News Sunday.

“I don’t believe when you’re dealing with something as serious as this that we can count on a voluntary system,” he said. “This is government’s job. If anything else, the government’s job is to protect safety and health of our citizens.”

Obama met Sunday with his Ebola response team, and a White House statement afterward appeared to refer to the quarantine issue. In the meeting Obama “underscored that the steps we take must be guided by the best medical science, as informed by our most knowledgeable public health experts,” the statement said.

“He also emphasized that these measures must recognize that health care workers are an indispensable element of our effort to lead the international community to contain and ultimately end this outbreak at its source, and should be crafted so as not to unnecessarily discourage those workers from serving,” the statement added.

On “State of the Union” Fauci told Crowley that putting “everyone in the same category” would result in “people not wanting to go over there (to West Africa).”

“You want to continue to make the safety of the American public paramount but it is critically important that you do that based on scientific evidence and data,” he added.

And U.S. Ambassador to the United Nations Samantha Power spoke in the direction.

“We need to find a way when they (health care workers) come home that they are treated like conquering heroes and not stigmatized for the tremendous work that they’ve done, ” Power said in an interview with NBC News before she left to visit Ebola-affected nations.

While Christie says that he trusts the federal Centers for Disease Control and Prevention and its Ebola guidance, he argues that protocols in place are not adequate enough protect his state from the deadly virus.

“Imagine that you’re the person in charge of public health of the people of large, densely populated state, in fact, the most densely populated state in the union. And these protocols continue to move and change. It was my conclusion that we needed to do this to protect the public health for the people of New Jersey. Gov. Cuomo agreed and now Mayor Emanuel agrees, and I think the CDC will come around on our point of view on this.”

At a press conference Saturday, Christie said he was “sorry if in any way she (Hickox) was inconvenienced, but inconvenience that could occur from having folks that are symptomatic and ill out amongst the public is a much, much greater concern of mine.”

He added, “I hope she recovers quickly.”