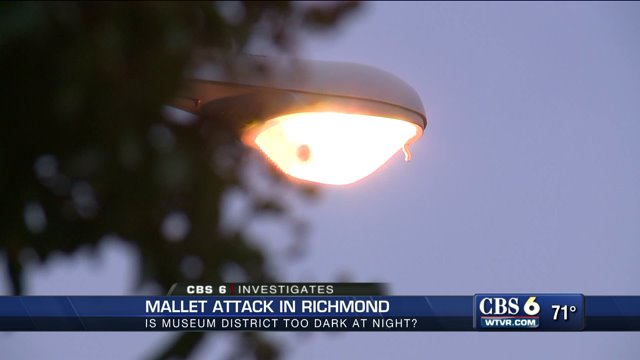 RICHMOND, Va. -- People who live in the Museum District are concerned about the lack of lighting on several blocks after a man and woman were viciously attacked with a mallet Monday night.

The attack happened shortly before 11 p.m. on Hanover Avenue.

“We heard a scream first from a man and then a woman,” Stephanie Jacobson, who rushed out to help with her husband, said.

Right in front of Jacobson’s home, a man and woman were in pain after being hit on the shoulder and head with a mallet, and robbed.

“We saw instantly there was a lot of blood and the injury was very apparent,” Jacobson said.

Jacobson described the street as safe, and even points to a street light right above where the attack happened.

Still, she and others in the Museum District said they wish there was more lighting in the area.

“The streets can be dark, there's not a lot of lighting,” Diana Markowitz, who lives in the neighborhood, said.

“Somebody could be sitting on the front brick stoop, and you wouldn't see them,” Rob McKenna, who also lives in the neighborhood, said.

We wanted to see just how dark streets in the Museum District get at night, so we walked them ourselves.

We found blocks with no streetlights, making them very dark.

And, others with a lot of trees covering the moonlight.

Erica Lamberta with the Museum District Association said if people have concerns about safety they should bring them to the association.

“If people have those concerns, please reach out to the Museum District Association,” Lamberta said.

While there are no plans to increase lighting in the area, Lamberta said the association takes safety very seriously, and are working with police to prevent future attacks.

“There is going to be a large visible increase in police presence in the Museum District,” Lamberta said.

The man and woman were walking along the 3100 block of Hanover Avenue just after 11 p.m. when they heard someone approach from behind.

Anyone with information about the crime was asked to call Crime Stoppers at 804-780-1000.

The man said the robber used the mallet to hit the woman, also 28, with one hand and stole her purse with the other hand. The woman was rushed to the hospital where she received more than 25 stitches in the back of her head, her best friend said.

“I did not really think the Fan/Museum District/Carytown area was sketchy at all,” the friend, who is caring for the robbery victim, said.

Police described the attacker as a 20 – 30-year-old black man wearing a white t-shirt and white baseball hat. Anyone with information about the crime was asked to call Crime Stoppers at 804-780-1000.