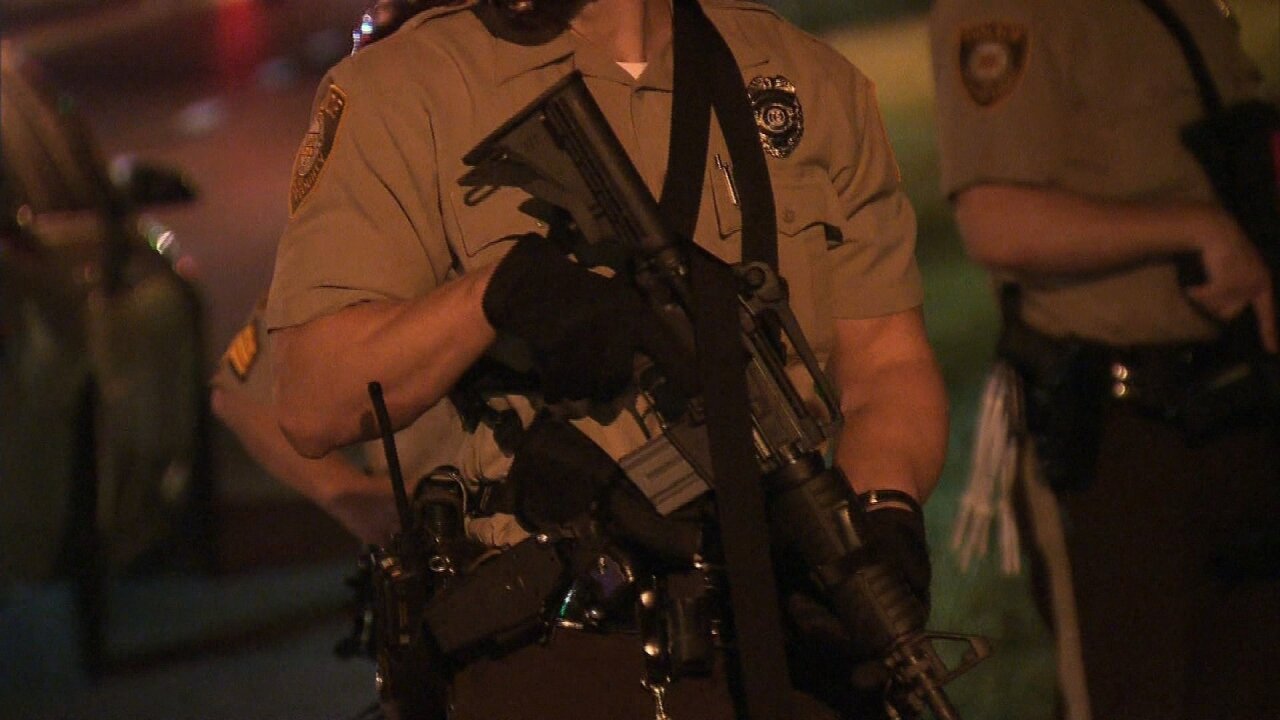 Police stand guard against protestors in Ferguson, Missouri in the early morning hours of August 14, 2014. Protestors demonstrated against the shooting death of Michael Brown.

A police officer from St. Ann, Missouri, has been relieved of duty and suspended indefinitely after pointing an assault rifle at a protester, in Ferguson, the St. Louis County Police Department said in a statement.

“On Tuesday, August 19, 2014, shortly before midnight, an incident occurred wherein a St. Ann Police Officer pointed a semi-automatic assault rifle at a peaceful protestor after a verbal exchange. It was at this time a St. Louis County Police Sergeant walked over and immediately took action, forcing the officer to lower the weapon, and escorting him away from the area,” the statement read.

St. Ann, like Ferguson, is a suburb of St. Louis.

Despite the calls for swift justice in the Michael Brown shooting case, it looks like it’s going to be a long haul. Protesters have taken to the streets for the past 10 days, and there seems to be no end in sight.

St. Louis County Prosecutor Robert McCulloch said he plans to begin presenting the case to the grand jury on Wednesday, but he told CNN affiliate KMOV that he expects it will be at least mid-October before all the evidence is before the panel.

“The aspirational time is by mid-October to have everything completed,” McCulloch told the station.

“We hope to have it done as thoroughly as possible, but as expeditiously too,” he said. “We’re not going to rush it through, and we’re not going to leave anything out. They will have absolutely everything that there is, every piece of paper, every photograph, every bit of physical evidence, all the forensic information.”

McCulloch made his comments as U.S. Attorney General Eric Holder was beginning a quick visit to the Ferguson, Missouri, area to check on the federal civil rights investigation into the August 9 shooting death of Brown by Ferguson Police Officer Darren Wilson.

The teenager’s death has angered Ferguson residents who say the shooting was racially motivated. Brown was African-American, as is about two-thirds of Ferguson’s population. Wilson and most of the city police force are white.

That anger has spilled out onto the streets, sparking nightly protests — sometimes violent — and leading to dozens of arrests amid criticism of what some of have called an overly militaristic police response to the demonstrations.

The grand jury will decide whether Wilson should face charges in Brown’s death. The officer is currently on paid administrative leave.

In a separate interview with radio station KTRS, McCulloch said jurors will hear evidence possibly until early September, when their term expires. He said he plans to hold the grand jury over to focus exclusively after that on the Brown case.

While he hopes to be done in October, the grand jury “can meet for as long as they want,” McCulloch told KTRS.

St. Louis Alderman Antonio French, who has been a regular fixture at the protests, said people are getting impatient to see how prosecutors plan to handle the case.

“We’re on day 12 now,” he said. “I think the people expect to see something by now, and they’re getting frustrated.”

But charges against the officer from either investigation will not come quickly, CNN law enforcement expert Tom Fuentes said.

In the state investigation, forensic details, the autopsy results and toxicology tests are still pending.

And federal investigators will plod ahead slowly, Fuentes said

“If they choose to bring charges against Officer Wilson, they have to go to trial in 90 days.”

So, they will take their time to make their case thoroughly, he said.

“They will rather be slow than wrong,” he said.

How McCulloch has decided to proceed with the case is also generating complaints. Missouri law allows prosecutors to charge defendants through complaints filed in open court, or through more secretive grand jury proceedings.

“This community has a distrust for the local enforcement officials,” he said. “So if you have a secret grand jury proceeding, where nobody knows what the prosecutor presents … and the grand jury comes back and says we find this (shooting) justified, I think that’s going to be very problematic for this community to accept.”

The attorney general arrived around midday and headed to a community college near Ferguson to meet with community leaders.

He was also expected to look in on the federal investigation into Brown’s death.

More than 40 FBI agents have been canvassing the neighborhood where 18-year-old Brown was shot, seeking witness accounts of what happened.

While police say Brown tried to push Wilson back into his cruiser after the officer stopped him for walking in the street, witnesses who have talked to CNN and other outlets have said Brown was standing with his hands up when shot. The teenager was not armed.

In a statement Tuesday, Ferguson leaders vowed to make changes. Among their promises: to recruit more African-Americans to join the overwhelmingly white police force in the largely African-American neighborhood.

They also promised to raise money to outfit officers and police cars with vest and dash cams.

Such cameras could have helped clear up the central question surrounding Brown’s death: Was he executed by Wilson while holding his hands in the air, or was he shot after rushing at the officer?

Holder’s visit comes after one of the more peaceful nights of the week in Ferguson.

A few hundred people walked up and down a small area. “Hands up! Don’t shoot” was their mantra, as it has been every night.

Many of the demonstrators added a second chant: “We protesters, we don’t loot.”

Later, the situation deteriorated when someone threw a water bottle at police.

By that time, most protesters had cleared out. Journalists outnumbered those who remained.

Officers put on helmets and shields, lined up in front of some businesses and demanded a small crowd there clear out.

But when the bottle flew, officers broke into a sprint, chasing after young men.

This prompted a handful of agitated protesters to toss more bottles, glass and plastic.

After the chase, the number of riot police ballooned. Officers brought out dogs. One officer used pepper spray on some in the crowd.

Protesters locked hands in front of a police line, and some urged the crowd to remain peaceful. Others, wearing T-shirts printed with the word “peacekeeper,” tried to defuse tensions.

Police arrested 47 people, Johnson said, including a car full of people who he said were armed and had made threats to shoot an officer.

Police and protesters have blamed agitators — including many from outside Ferguson — for the violence marring the demonstrations. According to the jail records, some of those arrested Monday night came from New York, California, Texas and Alabama.

Still, many have also criticized the police response.

Gen. Russel Honore, who handled crowd control in the chaos that ensued after Hurricane Katrina in New Orleans in 2005, joined them late Tuesday.

“You’re there to protect people,” he said. “They need to sense that from you.” Looking at crowd members through the scope of a gun sends the wrong message, he said.