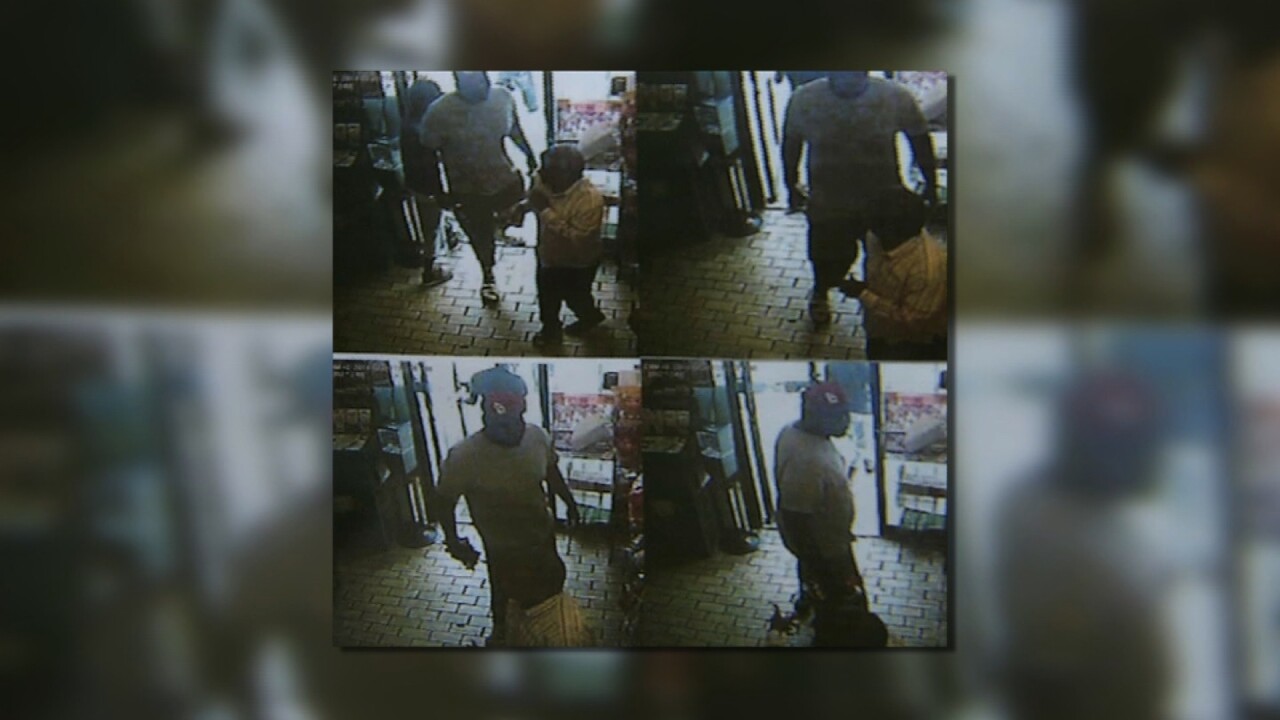 This imagery, released by the Furgeson, Missouri Police Department Friday, August 15, 2014, depicts an alleged strong-arm robbery at a convenience store. Ferguson police allege the man in these images is Michael Brown, the teen later shot and killed by police.

This imagery, released by the Furgeson, Missouri Police Department Friday, August 15, 2014, depicts an alleged strong-arm robbery at a convenience store. Ferguson police allege the man in these images is Michael Brown, the teen later shot and killed by police.

UPDATE:  Ferguson Police Chief Thomas Jackson told reporters Friday that “the initial contact between” Michael Brown and the police officer who fatally shot him was not related to the alleged convenience store robbery committed nearby a short time earlier.

The officer approached Brown not because of the robbery, but “because they were walking down the middle of the street blocking traffic,” Jackson said.

FERGUSON, Missouri — Police named the officer involved in the shooting of Ferguson, Missouri, teenager Michael Brown on Friday, then released documents containing a bombshell: The 18-year-old was the “primary suspect” in the robbery of a convenience store moments before he was killed.

Officer Darren Wilson, a six-year veteran of the department, was responding to that call when he encountered Brown, police Chief Thomas Jackson told reporters.

According to the documents, Brown roughly handled a clerk trying to stop him before walking out of the store with a box of Swisher Sweets cigars.

The unidentified police officer who wrote the incident report on the robbery said he identified Brown by comparing surveillance images of the incident to the body of the slain teen.

The claim immediately met with skepticism among some in the community, who have accused Ferguson police of attempting a cover-up to protect the officer.

One resident interviewed by CNN said police are “tarnishing this young man’s name.”

“Anyone could walk in the store and they could get surveillance and take a picture,” the woman said. “I don’t see that he’s robbing the store. I just see a picture of a young man.”

On Twitter, community members and activists expressed disappointment and outrage.

“How can they not release info on the shooting but link #MikeBrown to robbery. Shame on them,” @NafisMWhite tweeted.

The release of Wilson’s name satisfied a key demand of protesters and critics of the handling of the case by the suburban St. Louis police department and St. Louis County investigators handling the probe.

But, especially in light of the robbery allegations, the release of Wilson’s name is unlikely to quell protests in the city and elsewhere over Brown’s death.

A key complaint of protesters has been that witnesses say the officer shot Brown as he stood with his hands in the air.

Police have said the shooting occurred during a struggle for the officer’s gun.

The change was immediate and welcome to protesters.

Gone were the military gear and vehicles, the stun grenades, plastic pellets and tear gas police deployed on previous nights. So were the Molotov cocktails, sounds of gunfire and strife from protesters who had wandered among peaceful demonstrators.

The crowds swelled and became more diverse Thursday; their chants for justice accompanied a concert of honking car horns, and though their cause was somber, their mood was buoyant.

Despite the celebrated change in tone after his department stepped back, Jackson said Friday he is not going to resign, as some critics have suggested he do.

“I’m not going anywhere. I’m going to stay and see this through,” he said.

“We have a different approach that we’re using this evening,” he told CNN’s Don Lemon. Smiling instead of scowling is key. “I’ve smiled more today than I have in the past few days.”

Maj. Ronnie Robinson from the St. Louis City Police is working with Johnson. He underlined the importance of dialogue with residents. “We feel the pain in the community,” he said. They can protest 24 hours, if they want to.

He also insisted there will be law and order. No looting, no vandalizing. State troopers will protect small businesses, he said. And protesters may not block the streets.

Despite the new tone by authorities, some protesters said they were prepared for police aggression.

“Gas me, shoot me, I will stand my ground,” one sign read.

Antonio French, a St. Louis alderman who was arrested at a demonstration in Ferguson on Wednesday, said he’s noticed the new tone.

“Really, it has been the police presence, the heavy-handed presence, which has escalated the situation, and I think led to the violence each night. And so it’s good to see this new approach,” he said.

Ferguson’s police department has been criticized for a lack of ethnic diversity. The St. Louis suburb’s population is two-thirds African-American. Of the police force’s 53 officers, only six are African-American.

An eyewitness has said that the officer who shot Brown was Caucasian.

Johnson and Robinson are African-American. Though he believes in ethnic diversity and would like to see more in Ferguson’s police force, Robinson did not peg it to skin color but to a person’s ability to understand people’s culture and communicate with them.

“You’ve got to give respect to get respect,” he said.

Authorities have said that the change of appearance of the police force was intentional.

As Robinson spoke, a group of young Caucasian men behind him held up a sign calling for justice for Brown.

Nixon and President Barack Obama have called for peace from all sides and respect for the rights of protesters and the press. Police briefly detained two reporters Wednesday and Al Jazeera America said police fired tear gas and rubber bullets at their camera position.

“There is never an excuse for violence against police or for those who would use this tragedy as a cover for vandalism or looting,” Obama said Thursday. “There is also no excuse for police to use excessive force against peaceful protests or to throw protesters in jail for lawfully exercising their First Amendment rights.”

Brown’s killing has gained attention around the world and moved people to protest in other U.S. cities Thursday. In Los Angeles and in New York, hundreds gathered to demand justice for Brown.

They told the crowd to disperse and arrested a few people.