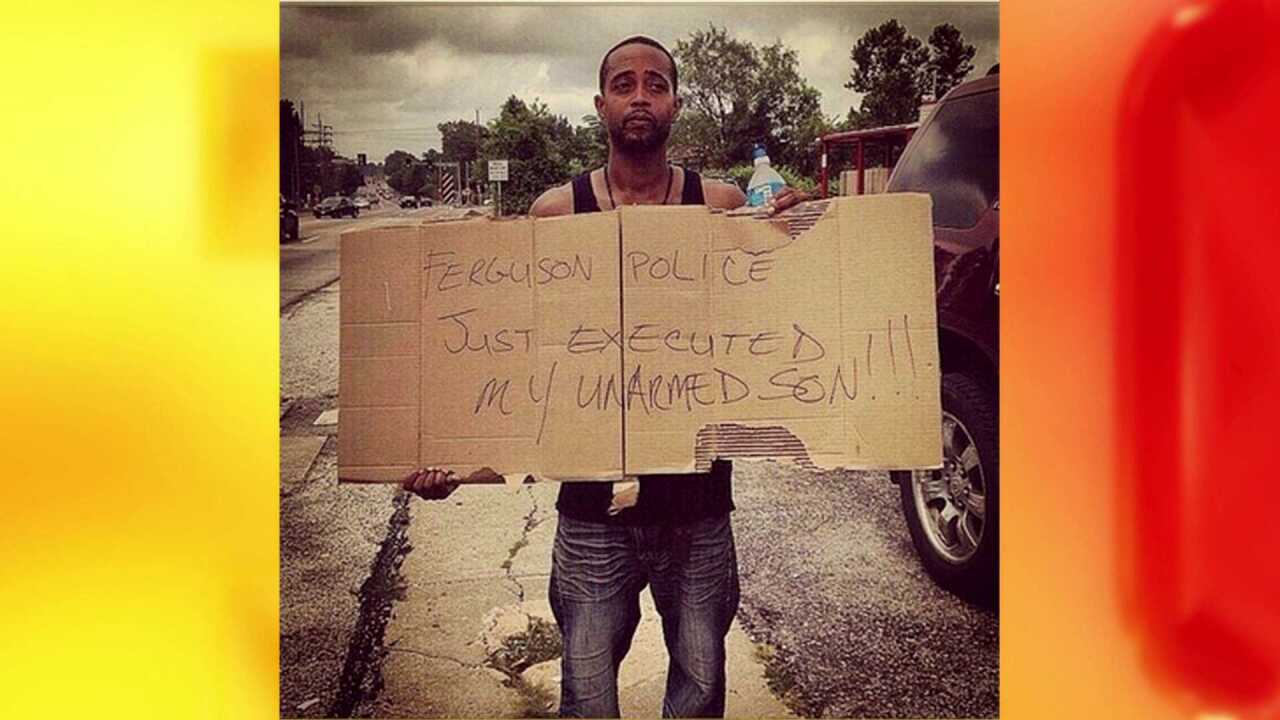 FERGUSON, Missouri – A Missouri community is angry and distraught after a Ferguson police officer killed a college-bound teen, Michael Brown, who a friend and witnesses said was unarmed and had his hands in the air.

That  account differs greatly from the one offered by police.

Prior to being fatally shot, Brown “pushed a police officer back into the car, where he physically assaulted the police officer” and struggled over the officer’s weapon, said St. Louis County Police Department Chief Jon Belmar.

McSpadden was told her son was shot eight times, though witnesses had varying accounts of how many shots were fired. Brown was supposed to start classes at Vatterott College on Monday, she said

Antonio French, the Ward 21 alderman in nearby St. Louis, tweeted numerous photos and videos from the aftermath of the Saturday shooting. Brown was shot shortly after 2 p.m., according to reports.

Hundreds have joined the protest in #Ferguson https://t.co/Sj6eAhcH1p

Hundreds of demonstrators — as many as 1,000 at the height of the protests, according to police — converged on the scene Saturday, at one point driving away a police squad car, French said on Twitter.

Scores of police officers lined the street. One of them held the leash of a barking dog, and French said some officers wielded shotguns. One image showed a riot van on the scene.

Demonstrators held their hands in the air and chanted, “We are Michael Brown.” Others held signs, including one that said, “No justice, no peace” and another that read, “Police stops should not = dead kids.” There were reports that some protesters yelled, “Kill the police.”

Demonstrators at one point set a Dumpster on fire, according to CNN affiliate KMOV, and Police Chief Thomas Jackson told KSDK, “It did get a little tense when, twice, several shots were fired.”

The Ferguson Police Department called more than 100 officers from 15 jurisdictions to secure the scene, KMOV reported.

“We had what probably bordered on riot conditions,” Jackson said, explaining that it took hours to process the scene, collect evidence and move Brown’s body.

Later, according to media reports, about 100 people took their protest to the Police Department in Ferguson, a northern suburb that’s about a 20-minute drive from St. Louis. Officers were deployed to ensure the demonstrations were peaceful, the police chief said.

McSpadden had pointed words for the officer who shot her son.

“You’re not God. You don’t decide when you’re going to take somebody from here,” she told KSDK.

Jackson said the St. Louis County Police Department was conducting an independent investigation. The officer who shot Brown is on paid administrative leave during the investigation and will be available to talk to county homicide detectives.

The St. Louis County NAACP is asking the FBI to open a probe and said it would conduct its own investigation into the killing.

“We plan to do everything within our power to ensure that the Ferguson Police Department as well as the St. Louis County Police Department releases all details pertinent to the shooting,” local chapter President Esther Haywood said in a statement.

Brown was spending the summer in the neighborhood with his grandmother, Desuirea Harris, she told KMOV. She described him as “a good kid.”

He was walking with at least one other man at the time of the incident, Jackson said.

Witnesses told CNN affiliate KTVI that a police officer in a squad car grabbed Brown while he was walking.

Dorian Johnson said he was walking with Brown in the middle of the street when a police car pulled up. The officer told the teens to use the sidewalk, according to Johnson.

After an exchange of words, the officer shot Brown even after he raised his hands in the air, Johnson said.

The officer “shot again, and once my friend felt that shot, he turned around and put his hands in the air,” Johnson told KMOV. “He started to get down and the officer still approached with his weapon drawn and fired several more shots.”

The police chief declined to divulge specifics about the case, including what preceded the shooting.