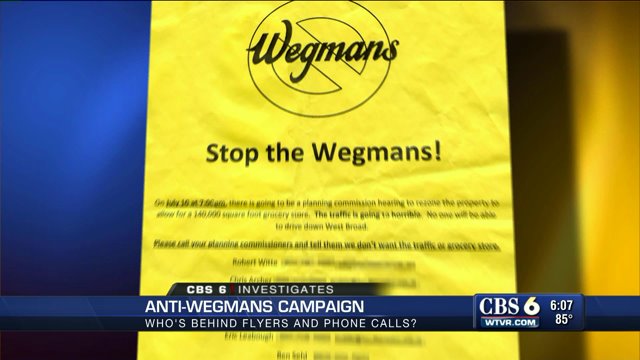 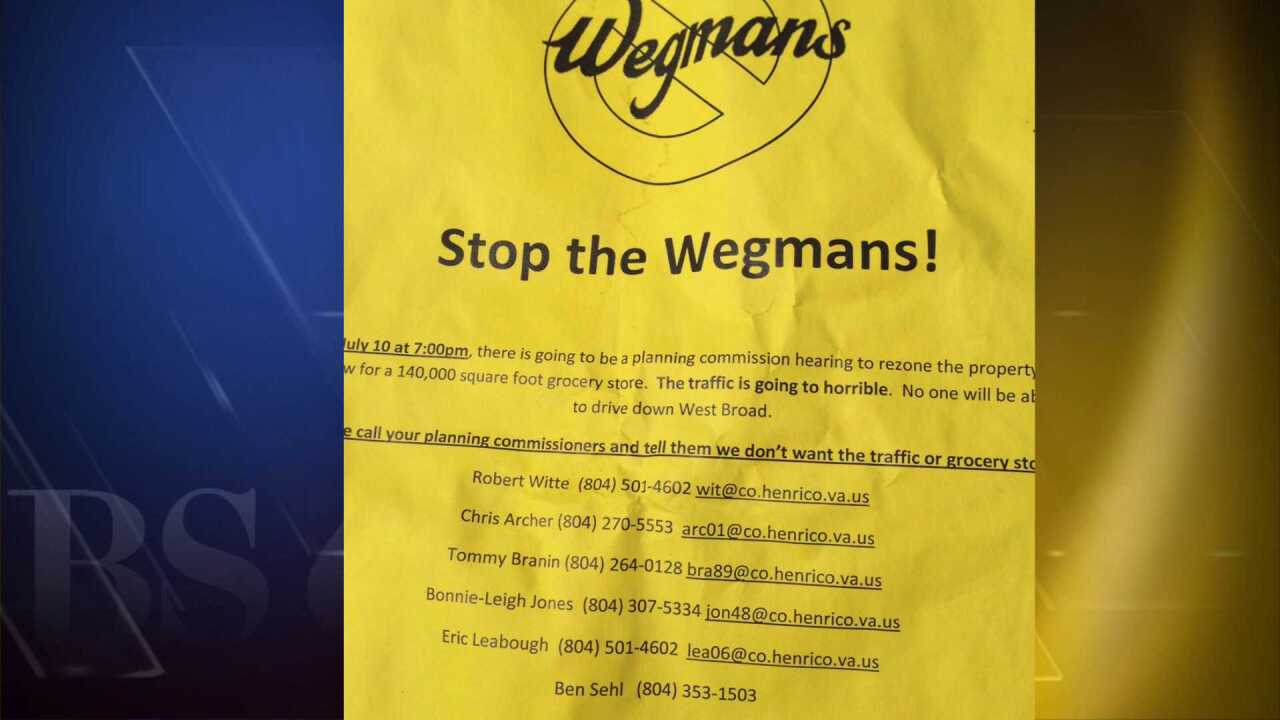 HENRICO COUNTY, Va. -- Henrico County residents who received phone calls and flyers encouraging people to oppose the construction of a new Wegmans grocery store are questioning the motive behind the calls.

Tuesday morning, days ahead of a vote, homes from Willow Lawn to Short Pump started getting phone calls.

"It was just odd, the whole thing was odd," said Maria Greco, who received three phone calls about Wegmans.

CBS 6 looked into the calls and found they are not coming from people who actually live in the area.

"They said that they were a group called 'concerned citizens of Short Pump' and they wanted to know if I was concerned about the Wegmans, nothing else, specifically the Wegmans coming in," said resident Kathy McCann.

Cabela's Incorporated, an outfitter for hunting, fishing and outdoor gear, has announced plans to open in 2016, near the Wegmans.

Those who got the calls say the caller on the other end had an agenda. One resident said he received more than 60 calls from the number.

"She basically started talking about how the Wegmans was going to, she said to me, increase crime," said April Sullivan.

Other callers said they were told about crime, traffic and air pollution. But no other new businesses were mentioned.

Many residents said they were not left with concerns over the grocery store, but rather concerns about the caller.

"I question whether there's a concerned citizens of Short Pump or if it's just concerned executives of area grocery stores,"McCann.

When the number is called, a concerned citizen of Short Pump doesn't answer -- instead  it's a recording by a telemarketing company.

If the Wegmans plan is approved, the Henrico store will be built on West Broad Street near North Gayton Road, near Short Pump Town Center.  There will be nearby competition from six other grocery stores just within blocks of the site; Walmart, Kroger, Martins, Whole Foods, Trader Joe's and Tom Leonards.

Between Wegmans and Cabelas, it is estimated more than 1,000 jobs will be created. The Henrico County Planning Commission will vote on the plan Thursday, July 10 at 7 p.m.

Developers are also planning to build a Wegmans in the Stonehenge Village Shopping Center on Midlothian Turnpike, west of Chesterfield Town Center.