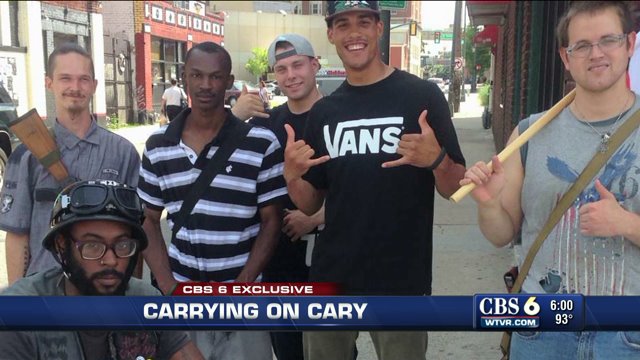 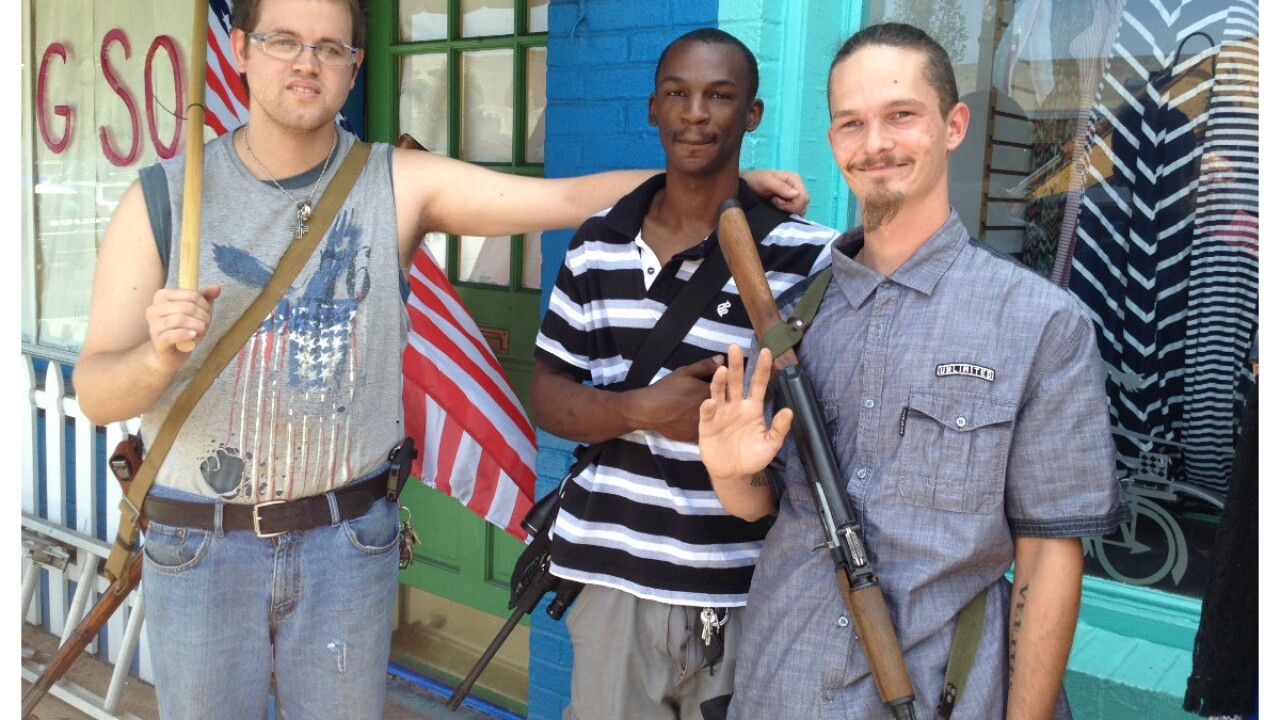 RICHMOND, Va. -- Three men armed with long guns, that they say are unloaded, have been turning heads as they walk through the busy urban retail district of Carytown.

People who live and work nearby said they've seen the group a handful of times, and few feel comfortable with the sight of the guns.

"It's not all negative out there, a lot of it is positive,” said Scott Royale, who has spent several weekends walking with a small group of friends down Cary Street and through downtown.

His friend Jason Spitzer started showing up with a flag and his long gun, and shortly thereafter others began joining him.

They said part of their plan is to simply "raise awareness of responsible gun ownership.”

Not everyone in Carytown is enthusiastic about the display, and shop owner Sherry Burgess said "I just think it's intimidating to people.”

One mother who has spotted the group, and who wishes to remain anonymous, is part of a group called “Moms Demand Action for Gun Sense in America.”

“My belief is that no one should be normalized to the site of these weapons in public,” she said. “There is no way to know if the person carrying one of these down Cary Street is a good guy or a bad guy.”

She added that many in their national organization aren't anti-gun, and many in other states have open carry permits.

"It was something about seeing, large guns, with three people carrying a flag that made it a little scary,” said Teresa Cerully, who works in Carytown.

Most understand the young men are trying to make a statement, they just aren't sure what it is,or why they picked Cary Street.

"A few weeks ago, they were standing in front of our store, talking to people about their cause and my customers were actually afraid to leave the store because they have small children and didn't know exactly what their cause was,” said Sheri Doyle, Carytown shop owner.

Olivia Walthall had mixed re-actions when she first saw the men and their guns.

"They let me express how I felt and then I head their side of the story and it was nice to get some insight,” Walthall said about the encounter.

She snapped this photo of the group in Carytown, in front of a children's book store, which is located beside a toy store.

Royale said that it hasn't been all negative reactions along their six mile walks.

"People ride by, honk their horn at you, wave at you, put their thumbs up, thank you for what you are doing,” he said.

A spate of open carry gatherings have popped around the nation, resulting in several stores banning guns on their premises.

Open Carry Texas has been very outspoken and hope to change legislation to be “less restrictive.” Rifles are allowed for open carry in Texas, not handguns.

Though he did say here in Virginia that open carry of a long gun is odd since Virginia law allows handguns to be openly displayed.

Spitzer has invited over 300 people to another open carry event on July 4, in Carytown. He said that his long gun is not loaded, though his hand gun is loaded and chambered.

He seeks clarification from an attorney if Richmond allows loaded long guns, saying that Virginia law does, though it does not allow capacity to exceed a 20 round magazine. Spitzer says there is some confusion among the group whether the city is excluded from Virginia law.

“I can strongly advise, please don’t,” he said about others showing up with loaded long guns. He said if they find out they can carry loaded long guns, they will but the guns will not be chambered.

In the Facebook invitation Spitzer writes that it will be held rain or shine and anyone is welcome to join. The group will meet at 11:45 a.m. Byrd Theater Parking Garage on Friday.

“Getting up and doing something positive or negative is better than sitting around at your house with an opinion never actually getting up and standing for something. Nut up or shut up. I am a true patriot. Are you?” he writes.