HOLMBERG: Where does the Dave Brat toppling of Eric Cantor rank? 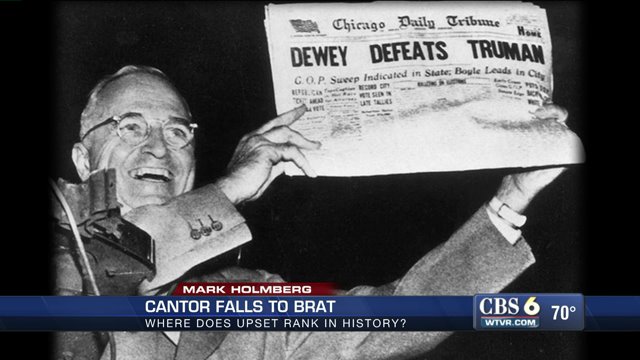 Where does it fall along the historical timeline? 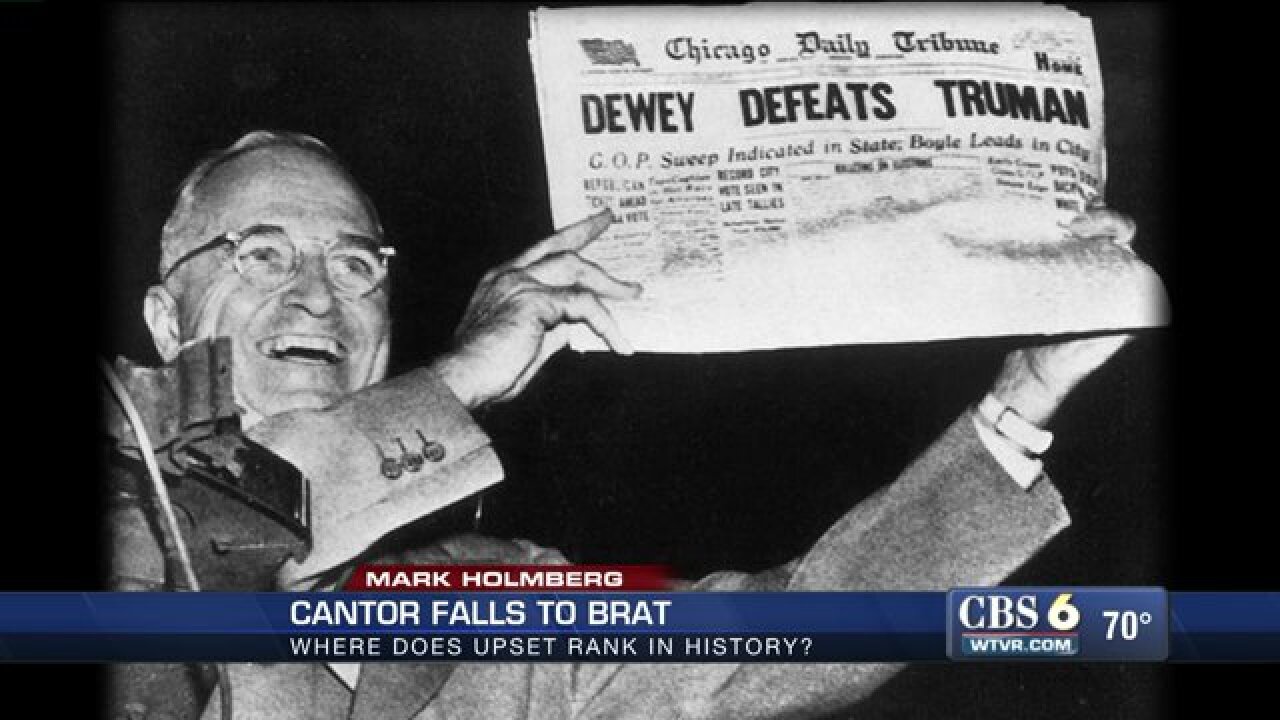 HENRICO COUNTY, Va. -- Enter the unknown Randolph Macon economics professor who snuck up and absolutely Brat-slapped Eric Cantor, one of the premier politicians in the nation and presumptive future presidential contender.

Dave Brat, 49,  won the primary in a landslide with a  23-year-old campaign manager who wheeled-and-dealed with a Wal-Mart flip phone. They spent one dollar for every $40 Cantor peeled off his fat campaign roll.

Experts are talking with great vigor, but they’re largely flummoxed. They say this was a referendum on immigration reform and establishment conservatives. It was helped along by longtime Democrats voting in a Republican primary to unseat the hated Cantor and their unlikely bedfellows, conservative talk radio. Yes, Cantor is a prominent face of a very unpopular Congress.

But all that doesn’t explain the scope of the epic upset, much more surprising than the 1948 presidential election that saw Truman win re-election over  Dewey in a night that was more historic for the Democratic sweep of the house and senate. The famous “DEWEY DEFEATS TRUMAN” newspaper headline was really more about blundering by the Chicago Tribune than a  truly huge upset.

Perhaps the closest parallel was the surprising 1994 defeat of House Speaker Tom Foley of Washington State by a brand new political player like Brat.  The poetic deciding issue – term limits.

Another shocker was the 1998 governor’s race in Minnesota, won by pro-wrestling actor Jesse “the body” Ventura, a reform candidate who body-slammed the other contenders in a last-minute decision.

But true upsets are typically measured by heroic efforts by the spoilers. For instance, the scrappy resolve of the 1980 US Olympic team against the Russkies – the Miracle On Ice – or the hot shooting of the 1974 Fighting Irish in their jaw-dropper against UCLA.

But Brat didn’t do any of that. He worked hard – but heroic? He clearly didn’t expect to win, just make a statement.

And now, millions of folks are saying, who is this guy anyway?

Some democrats I know who hated Cantor and voted for Brat were quizzing me about what I knew about him. They seemed genuinely surprised by the idea that Brat could very easily win the November race against the democratic contender, fellow Randolph-Macon professor Jack Trammell, and that Brat may likely turn out to be more conservative than Cantor.

That’s why this is such a fascinating upset. A real grassroot, shoestring campaign. A largely  unknown contender. And a straight-up whupping of the big dog.

Here’s a little info on this historic spoiler:

David Brat is an economics and business professor at Randolph-Macon College in Ashland, Va., who has long blended religion and economics with his studies and writings.

Brat, a Catholic who attends St. Mary’s Catholic Church, lives in a well-groomed subdivision in Henrico County with his wife, Laura, and two children, Jonathan and Sophia.

His political history is so brief, it’s tough to find out the basics.

Born in Detroit 49 years ago, he grew up in Alma, Mich., a small city of 10,000, and was the oldest of three sons growing up on a farm. His father was a  family practitioner.

Brat’s brother, Dan, who is a year and half younger, is vice chairman of the neuro-pathology department at Emory University. His brother Jim, who is four years younger, is an attorney at a legal firm in Los Angeles focusing on commercial real estate.

Brat had support from radio talk show host Laura Ingraham, who hosted a rally with him in a Richmond suburb last week that focused on opposition to immigration reform.

Brat, a member of the Henrico Republican Party,  earned a Masters in Divinity at Princeton and a Ph.D. in Economic at American University.

In 1996, the Brats  moved to Henrico and he began teaching Economics and Ethics at Randolph-Macon College, and he chaired the Economics and Business department for the past six years.

He has provided local television and newspaper analysis on economics. He sits on the Richmond Metropolitan Board and has served as served two Governors on the Joint Advisory Board of Economists.

There you go, the man who just entered the history books as one of the greatest political spoilers ever.