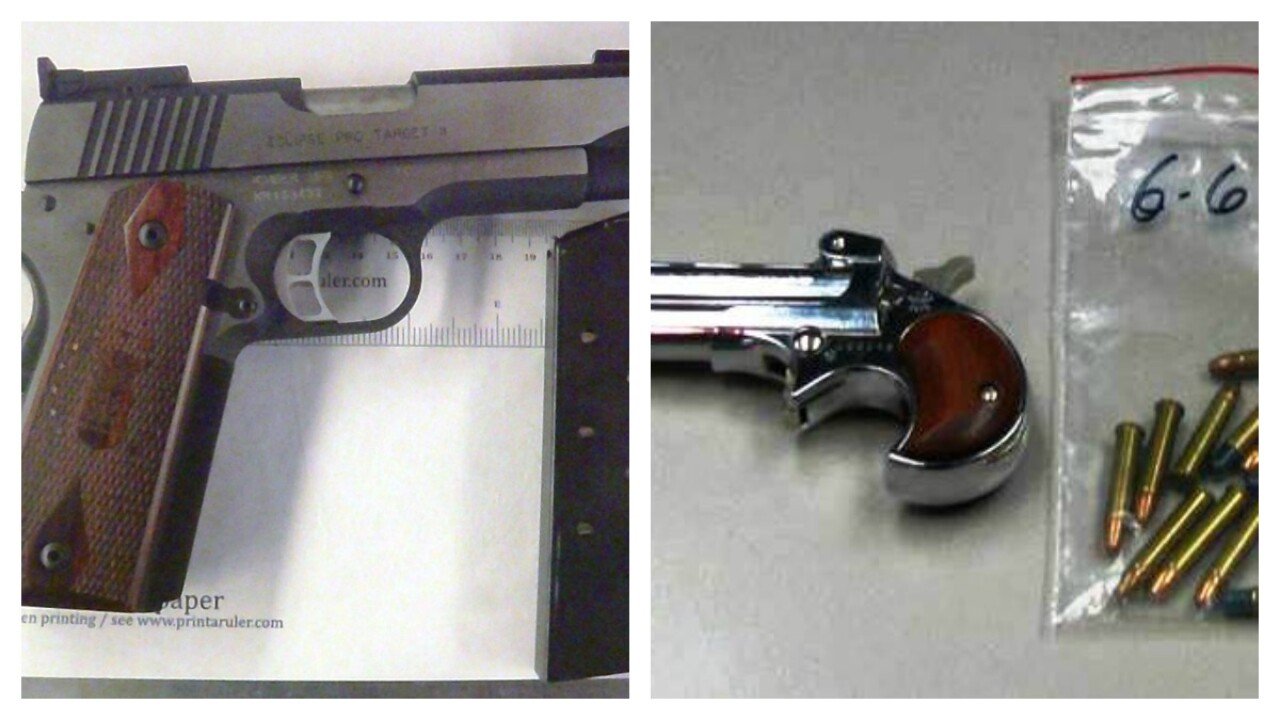 The day after  the agency reported stopping a record 18 guns at checkpoints nationwide on Thursday,  two Virginia men were arrested for carrying guns. Thursday’s reports became the most ever amount of guns detected at checkpoints in one day.

TSA officers caught this handgun in a passenger’s carry-on baggage at Richmond International Airport this morning (June 6). The passenger was arrested. (Photo courtesy of TSA)

A Chesterfield County man was arrested by police after TSA officers stopped him at Richmond International Airport checkpoint with a .22 caliber gun loaded with two rounds plus an additional 12 rounds of loose ammunition.

A Forest County resident was arrested by Lynchburg Airport Police after TSA officers caught him with a loaded .45 caliber gun at the checkpoint at Lynchburg Regional Airport. That gun was loaded with eight rounds of ammunition including one in the chamber.

In both instances, as the men were passing through the airport checkpoints, the TSA officer who was staffing the checkpoint X-ray machine detected the guns inside the travelers carry-on bags as they passed along the conveyor belt.  TSA officers contacted the local police who responded to the checkpoints, confiscated both firearms and arrested the men on weapons charges.

TSA officers caught this handgun in a passenger’s carry-on baggage at Lynchburg Regional Airport this morning (June 6). The passenger was arrested. (Photo courtesy of TSA)

Preliminary indications are that the incidents are not related.

Weapons—including firearms, firearm parts and ammunition—are not permitted in carry-on bags, but can be transported in checked bags if they are unloaded, properly packed and declared to the airline. Passengers who bring firearms to the checkpoint are subject to possible criminal charges from law enforcement and civil penalties from TSA.  Firearm possession laws vary by state and locality and travelers should familiarize themselves with state and local firearm laws for each point of travel prior to departure.

Passengers are responsible for the contents of bags they bring to the security checkpoint, and TSA’s advice to passengers is to look through bags thoroughly before coming to the airport to make sure there are no illegal or prohibited items.

TSA has details on how to properly travel with a firearm posted on its web site here: http://www.tsa.gov/traveler-information/firearms-and-ammunition. Airlines may have additional requirements for traveling with firearms and ammunition. Travelers should also contact their airline regarding firearm and ammunition carriage policies.