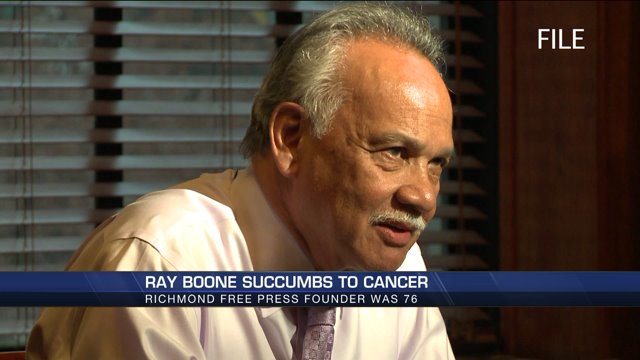 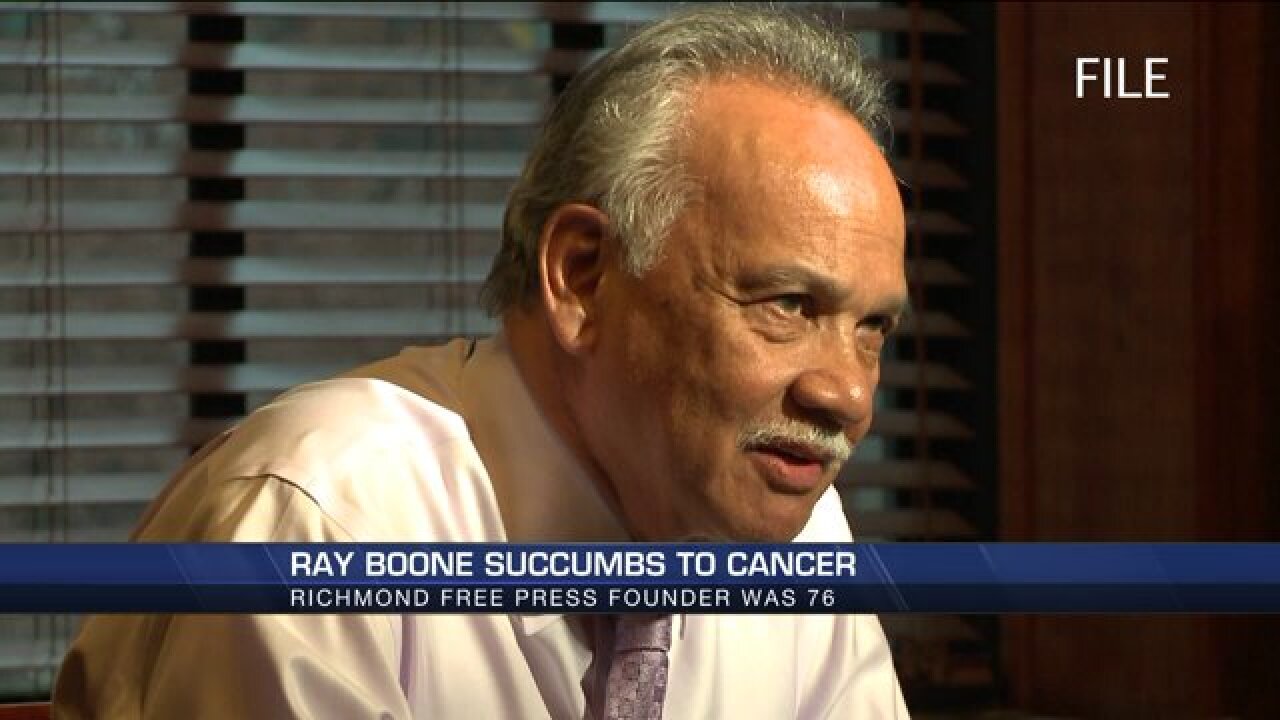 RICHMOND, Va. -- Ray Boone was a crusader for sure. You always knew where he stood on issues.

It was typically blasted across the front page of his Richmond Free Press newspaper in bold type.

“We don’t need to beat around the bush,” is how 70th District State Delegate Delores McQuinn summed up Boone’s bluntness. “He did not hold back.”

A sharp-dresser and typically slow on the drawl, Boone’s pen was fast, furious and right down in the trenches, frosting many pumpkins in the white community, and more than a few in the black community that he championed with great energy and dedication.

“They were the conscientious catalyst for the African-American community on the issues of social injustice, equality,” McQuinn said.

Boone “brought to our attention what we should be doing.”

Ray Boone, 76, died of pancreatic cancer Tuesday. He left behind two children, and his wife, Jean Boone, who has pledged to continue her husband’s 22-year-old Free Press mission.

Boone was quite a character in a city known for them. He rubbed shoulders with former governor and mayor L. Douglas Wilder, known to be a difficult man with whom to rub shoulders. He’s been friendly with most of the political players in this town, and has been successful pushing the idea of economic justice and fighting poverty.

He firmly believed black Richmonders should vote with their wallets, supporting those businesses that supported them.

Which is why he likely  blew a small fortune in advertising dollars by alienating more than a few businessfolk in this town.

His politics were also right there for the world to see.

For example, his paper served as a tireless cheerleader for Barack Obama.

He believes that’s one of the reasons why his paper boxes were targeted by graffiti vandals who wrote “HATE” and “RACIST” on them.

When Mayor Dwight Jones tossed the Occupy Richmond protestors out of Kanahwa Plaza Park, Boone invited them to rally and cookout on his front yard, which just happens to be next door to the mayor’s.

“Welcome to a free speech zone,” he told them.

That’s the way he was - totally into free speech, freedom of the press and the power of that free press has to shape and improve our culture, to correct injustices, the bring freedom to everyone.

The saying “the pen is mightier than the sword”  was not just idle chatter to Ray Boone. He believed it, wielded it.

Born in Suffolk in 1938, Boone started reporting as a teen for the Suffolk News Herald. He graduated from Boston University and was a White House correspondent.

He taught journalism at Howard University in Washington. He played a huge role in the prominent Afro-American newspapers out of Baltimore, and was credited by Time magazine with elevating the stature of that network of papers.

Distrustful of the establishment newspaper in Richmond, he moved his operation into a big, classy building right next door to the Richmond Times-Dispatch. Putting up his big “Richmond Free Press” building signs as if to say, “Here we are!”

Tom Silvestri, the publisher of the Times-Dispatch, wrote me an email to say “I do extend sincere condolences to the Boone family and the Richmond Free Press. I certainly will miss my downtown neighbor and fellow newsman.”

I wrote for the Times-Dispatch for two decades and got to know Ray Boone fairly well. He twice tried to talk me into working at his paper, and we kept in touch over the years.

It’s hard to believe we won’t be hearing from this  bantam rooster of journalism -  this gentleman who could also be such a sweet, genuine guy.

Best and fond wishes to all those who knew and loved him.

Richmond is certainly better for his crusading.