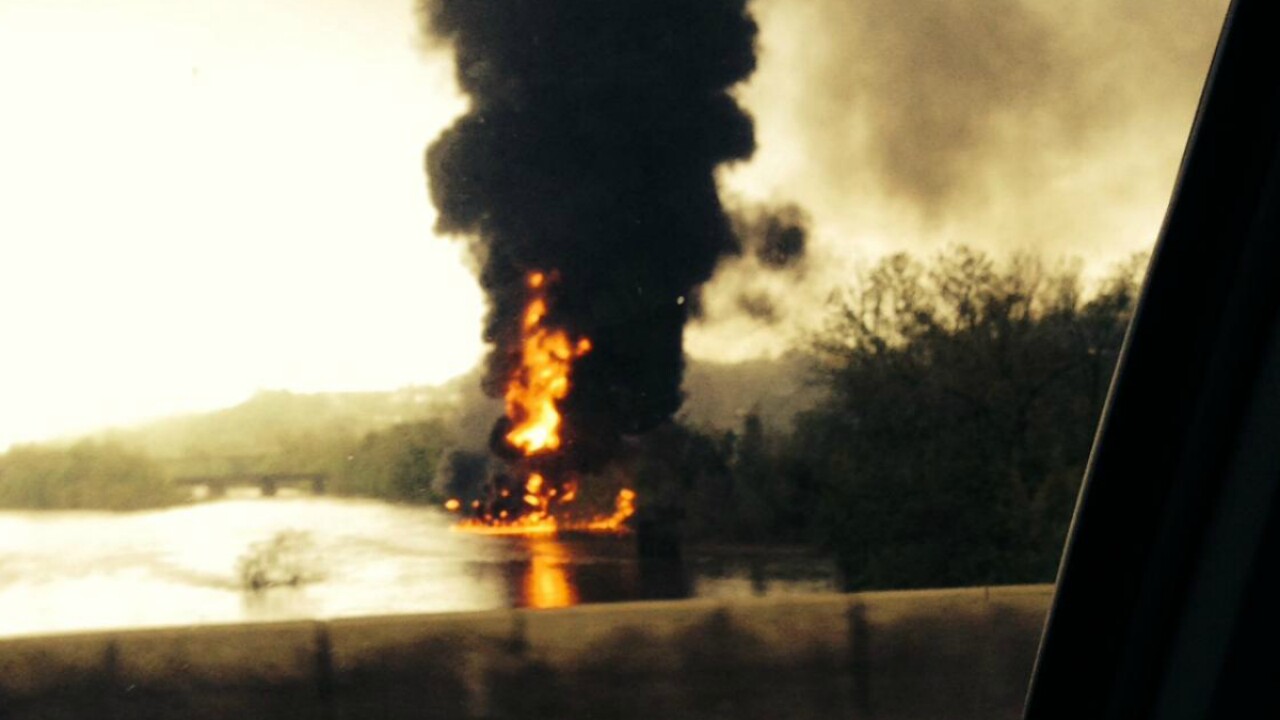 LYNCHBURG, Va. (WTVR) - The Lynchburg Department of Emergency Services has responded to reports of a train derailment and fire in area of Depot Grille.

The trains were carrying crude oil, according to WDBJ. The CSX train was carrying between 12 and 14 CSX tanker cars when it derailed around 1:45 p.m., according to WDBJ, who said on-air that around three or four trains breached and are in the James River.

There is no report yet why the trains derailed.

CSX officials worked to remove the portion of the train that is blocking workers from leaving Griffin Pipe Foundry located in the lower basin. Police urged people to avoid the downtown area. Some residents are being evacuated to the E.C. Glass High School.

The Depot Grille is located at 10 Ninth Street in Lynchburg. The location of the train derailment runs along the James River. There is no word yet exactly how much spilled into the James, or how long that could take to reach Richmond.

According to a Lynchburg city official who has been at the command post, crude oil is slowly leaking into the James River, affiliate WDBJ reported. Intake stations downstream have been notified. A boom in the river is trying to catch the crude oil.

The oil is expected to arrive in the area either Wednesday night or Thursday morning, said Bob Steidel  with Department of Public Utilities, at a press conference. He noted that the river's current high, and fast moving, conditions will move the oil through faster.

The X at top of pic is where H2O comes into plant, at the bottom its held a while , and tested that whole stretch.

Richmond will consider using an alternate water source due to the train derailment, Steidel said, if needed. They will continue to monitor the situation and test the water.

Henrico is not switching from the James River, said William Mawyer, Assistant Director for Henrico Public Utilities. He said that intakes are well below the surface of where crude oil resides. He said that they would inform residents of any changes to the water supply, and are taking precautionary measures by filling its water storage tanks as a precaution.

Chesterfield gets water from the city, Swift Creek Reservoir and Lake Chesdin. They are isolating and shutting down the lines that come from Richmond and will service the entire county using water from the other two sources.

Once the city switches and determines that the water from the alternative source is safe they will open the lines from the city, said Chesterfield’s Public Utilities department, Roy Covington.

He also said that their main priority was to provide safe drinking water for the citizens of Chesterfield County.

No injuries have been reported.

“Deputy Secretary of Public Safety and Homeland Security Adam Thiel has been dispatched to the scene and will provide my team and me with constant updates as this situation unfolds. I have also spoken with Lynchburg Mayor Michael Gillette and offered him any and all resources he needs to respond to this incident and keep Virginians safe.”

The James River Association expressed concern over the oil spill, and noted that studies have documented that 81-percent of toxic chemicals in Virginia are stored in facilities within the James River watershed.

“We are obviously very concerned about the impacts of this incident on the James River and will work to confirm that they are fully addressed and mitigated,” stated Pat Calvert, Upper James Riverkeeper.

“Taken with the other toxic spills that occurred in the region over the past months, this is also a time to assess the risks to the James River and see that all necessary actions are taken to ensure that such a valuable natural resource is protected.”