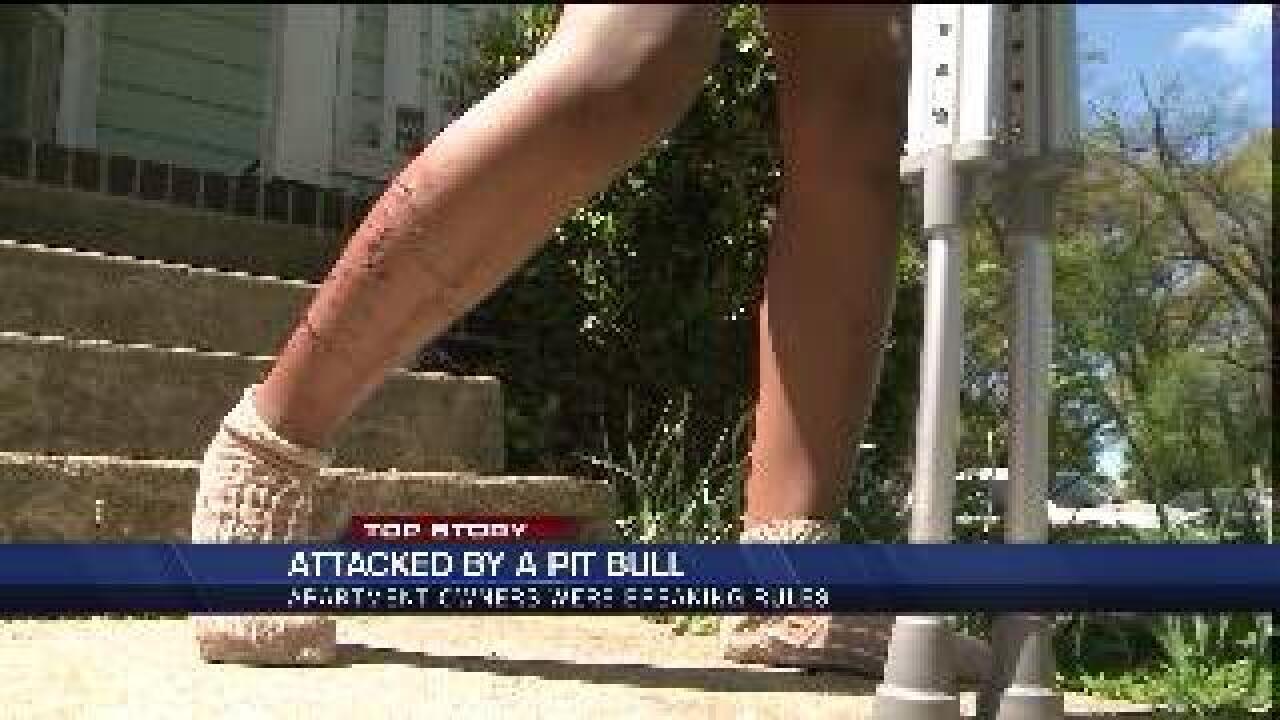 RICHMOND, Va. (WTVR) --Sabia Gentry is scarred for life, and not all the damage is physical.

She has 37 stitches on her legs that didn't result from a fall on the playground.

"It was just a whole lot of blood just dripping out of my leg," recalled Gentry.

The 9-year-old says a pit bull attacked her inside of a Richmond public housing unit.

"It didn't sniff me, it started attacking me and biting me on my leg," said Gentry.

She said she regularly goes to her next door neighbor’s apartment in Mosby court afterschool, and the dog is normally kept in a cage.

But on Monday, Sabia says a 16-year-old who lives in that apartment decided to let the animal loose.

She said the kids tried to treat the bites.

"They just started putting ice and bandages on my legs," said Gentry.

Sabia tells us she didn't get help until she reached her grandmother, Lisa Eggleston, by cell phone, and Eggleston called 911.

"I was very upset. And when I went to the steps and pulled up her pants. I hollered and screamed," said Eggleston.

Mike Wallace, a city spokesperson, told CBS 6, that an investigation is underway.

Wallace said the dog is being quarantined at the home because the incident was inside the apartment.  He stated that the dog has no other history of bite incidents or running loose away from the owner's property, and the dog is current on its rabies vaccinations.

However, according to the pet policy in the Richmond Redevelopment Housing Authority leasing agreement, prohibited animals include vicious ones – and the pitbull is listed as a breed that has a reputation for displaying vicious behavior.

“Prohibited Animals: Animals or breeds of animals that are considered by RRHA to be vicious and/or intimidating will not be allowed. Some examples of animals that have a reputation of a vicious nature are: reptiles, Rottweiler, Doberman Pinscher, Pit Bull-type dog, German Shepherd, Chow, and/or any animal that displays vicious behavior. This determination will be made by a RRHA representative prior to the execution of this lease addendum. “

CBS 6 asked why the dog was allowed in that apartment, based on the lease agreement, but the rental office wouldn't comment. Instead they sent us to RRHA's main office on Chamberlayne Avenue.

RRHA sent a statement to CBS 6 that said if they determined that a pet may be a danger or threat to the safety and security of other persons, the pet must be immediately removed from the unit upon receipt of the notice from RRHA.

In the meantime, Eggleston wants the dog put down and her daughter and grand-daughter relocated someplace else.

"I'm praying to God that my daughter will be moved out of those apartments because my granddaughter is terrified to go back," said Eggleston.

"I'm too terrified to go back over there," said Gentry, who lives next door to where the incident happened.