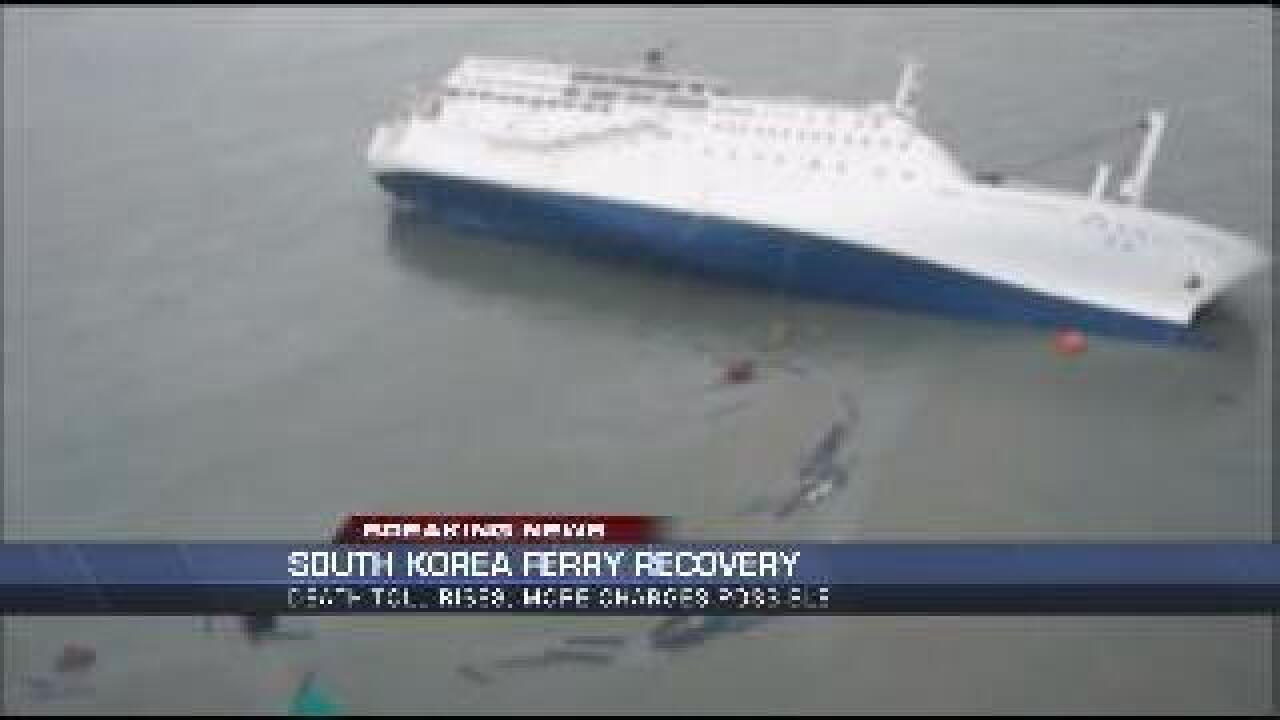 JINDO, South Korea (CNN) -- Crew members from the sunken South Korean ferry Sewol said Tuesday that they were unable to reach the lifeboats as the ship was tilting over.

The four who appeared Tuesday had their heads bowed and faces covered, making it unclear which of them was speaking.

Asked by a journalist if anybody got to the lifeboats as the ferry was listing badly, one of the crew members said they "made attempts do so, but it was hard to go there."

All the crew members "made attempts to do that," he said. "But we slipped so we could not do that."

The failure to deploy the lifeboats is one of a series of problems that beset those on board the sinking vessel last Wednesday. So far, 108 people have been confirmed dead and 194 remain missing.

A transcript of a radio conversation released by authorities over the weekend suggested that passengers on the ship couldn't reach lifeboats to escape because the ship tilted so quickly that it left many of them unable to move.

But the ship's captain and some crew members have come under heavy criticism, notably for the captain's decision to tell passengers to stay where they were.

Search for survivors goes on

At the scene of the disaster, inflatable powerboats zipped across the sea off the country's southwestern coast Tuesday, ferrying divers to the area where the ferry sank.

Two huge buoys bobbing on the surface mark the spot underneath which the ship lies. Dozens of vessels, ranging from dinghies to warships, surround the site.

Divers plop into the cold, opaque water, picking up guide ropes that lead them into the submerged ferry where they can see barely a foot in front of them.

"Divers can't even see their hands," said Koh Myung-seok, a spokesman for the joint task force leading the search.

Authorities say the efforts are still a search and rescue operation, but no survivors have been found since 174 people were rescued soon after the ferry went down on Wednesday. The death toll keeps ticking grimly upwards as divers bring more bodies to the surface.

On the shore, family members of missing passengers wait anxiously, many of them parents of high school students who taking the ferry on a field trip. Some relatives are called into white domed tents to identify the remains of their loved ones.

The divers' efforts are focusing on the third and fourth floors of the ferry, but gaining entry to a cafeteria where a lot of passengers may have congregated is proving difficult.

"There are a lot of objects, including furniture. It's a mess there," Koh said Monday evening.

Because the ferry sank during the morning, Koh said authorities think a lot of people may have been in the cafeteria at the time.

Divers have been trying to breach a wall between the lounge area and the cafeteria, Park Seung-gee, an official at the Ministry of Oceans and Fisheries, said Tuesday.

"The conditions are so bad, my heart aches. We're going in thinking there may be survivors. When we have to come back with nothing, we can't even face the families," said Bard Yoon, one of the divers.

Koh said that most of the bodies recovered were wearing life vests.

As the search continues beneath the waves, investigators are still trying to establish what happened to the ship to make it list to one side before tipping into the ocean.

Initial criticism has focused on the captain and some of the crew members. South Korean President Park Geun-hye said Monday that there actions were "akin to murder."

The captain, Lee Joon-seok, has defended his decision to tell passengers to stay put as the ferry began sinking, saying he was concerned about the sea's strong currents and cold water, as well as a lack of rescue ships.

The captain and six crew members, who made it off the ship alive unlike many of the passengers, have been arrested and are facing criminal charges.

The six crew members detained are two first helmsmen, one second helmsman, a third mate, the chief engineer and a technician, according to prosecutors.

Questions have been raised about why the third mate was steering the ship when it ran into trouble on its way to a popular vacation island. The captain was in his cabin at the time.

Chonghaejin Marine, which operated the ferry, has posted an apology on its website.

"We pray for the Sewol victims who lost their precious lives due to the accident," it said. "We prostrate ourselves before the victims' families and beg for forgiveness."