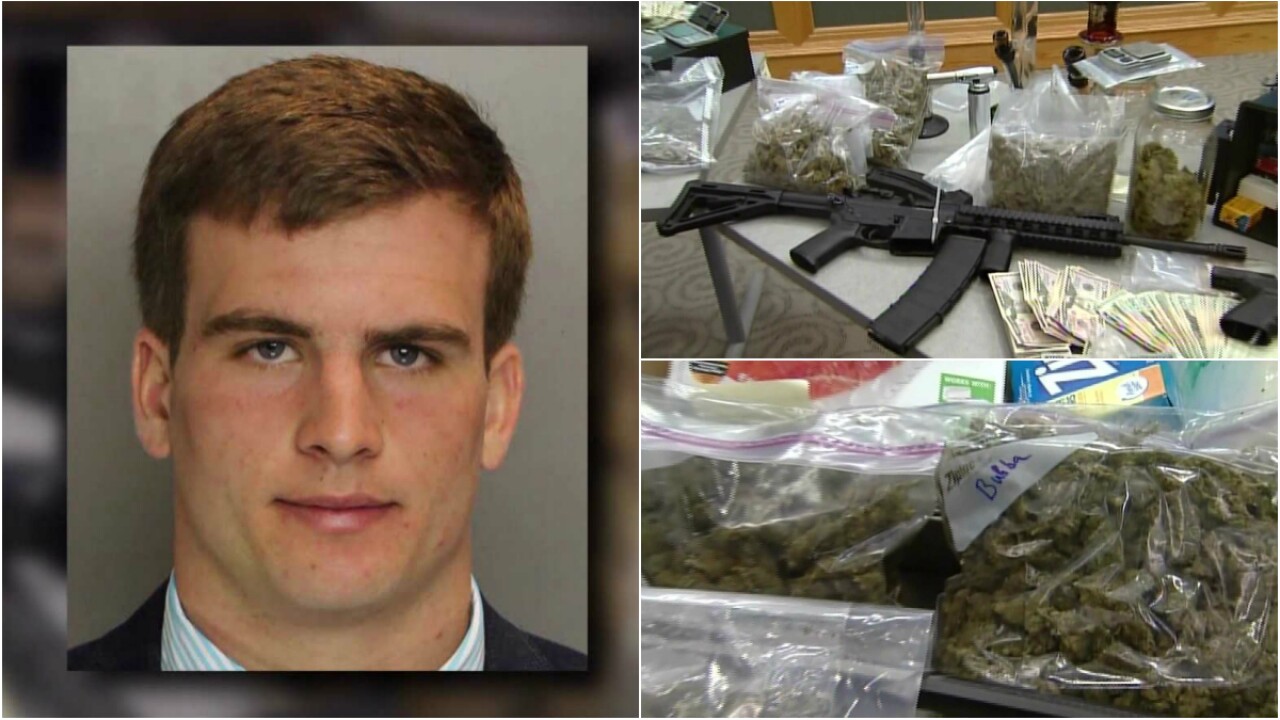 (CNN) -- Two young men, a bunch of subordinates, one master plan: Take over the drug trade at some of Pennsylvania's best schools.

Authorities announced Tuesday that they were able to foil this ambitious effort -- unearthing marijuana, hash oil, cocaine, ecstasy (or MDMA, its active ingredient) as well as cash and several weapons -- and arrest the pair allegedly at the center of it, among others.

"They were in business to make money, and they were going to do whatever they needed to do to make sure that no one threatened their business," Montgomery County District Attorney Risa Vetri Ferman said.

She was speaking primarily of the main suspects, 25-year-old Neil Scott and 18-year-old Timothy Brooks, behind what they allegedly called the "Main Line Take-Over Project" -- the Main Line referring to a group of affluent towns and cities outside Philadelphia.

And these weren't just any schools. They include the prestigious Haverford School, from which both Scott and Brooks graduated. They had ties to its lacrosse program.

The public high schools of Conestoga, Radnor, Harriton and Lower Merion -- each of which have some of the highest SAT scores in Pennsylvania -- were also part of the ring, according to the district attorney's office. So, too, were nearby Gettysburg, Haverford and Lafayette Colleges.

In brief comments Tuesday, Scott's lawyer Tom Egan said his client's "main concern ... is how the mandatory minimums are going to operate if he's indeed guilty of the offenses."

Greg Pagano, Brooks' attorney, spoke more extensively regarding his client, who went to the University of Richmond in 2013 on a lacrosse scholarship then left after one semester. He said Brooks had gotten injured, after which he was at home, "idle and suffering from some depression" when he got involved with Scott "at a very susceptible, low point in his life."

"He's willing to accept responsibility for what he did," Pagano said of Brooks, whom he said "was involved in this conspiracy for a very, very short period of time."

In a news conference and release, authorities laid out what they described as an elaborate operation to build up business. This effort included things like offering incentives to sub-dealers, such as lower drug prices and being able to buy them on credit.

Including Scott and Brooks, eight people have been arrested in the case, an arrest warrant is out on another, and there are petitions for two juveniles. All but two of those arrested attended local schools such as Lafayette College, the Haverford School and local public high schools. They face a host of drug, criminal conspiracy and other charges.

Reflecting on the areas where this alleged drug scheme operated, Seth Williams -- the district attorney for Philadelphia, which is near the schools in question -- said in a press release, "The days of, 'It can't happen here' are long gone."

The arrests follow an investigation that began in January. Authorities say seized text messages showed the suspects' plans to expand the business, with Scott giving Brooks business advice on how to expand marijuana sales in local high schools and Brooks encouraging sub-dealers to "efficiently distribute drugs at their schools," Ferman's office said.

Authorities assert the discovery of a loaded .223 caliber AR-15 assault rifle, in addition to a semi-automatic pistol and another rifle, suggest the drug ring's leaders had the capability to use force.

Ferman admitted she's bothered by the fact Scott -- who left Connecticut College after three semesters of study after being sanctioned for using marijuana and creating fake IDs -- and Brooks both attended Haverford, then allegedly did what they did.

"You're dealing with kids from one of the finest institutions probably in the country," she said. "To take those skills and turn it into this kind of illegal enterprise is very distressing."