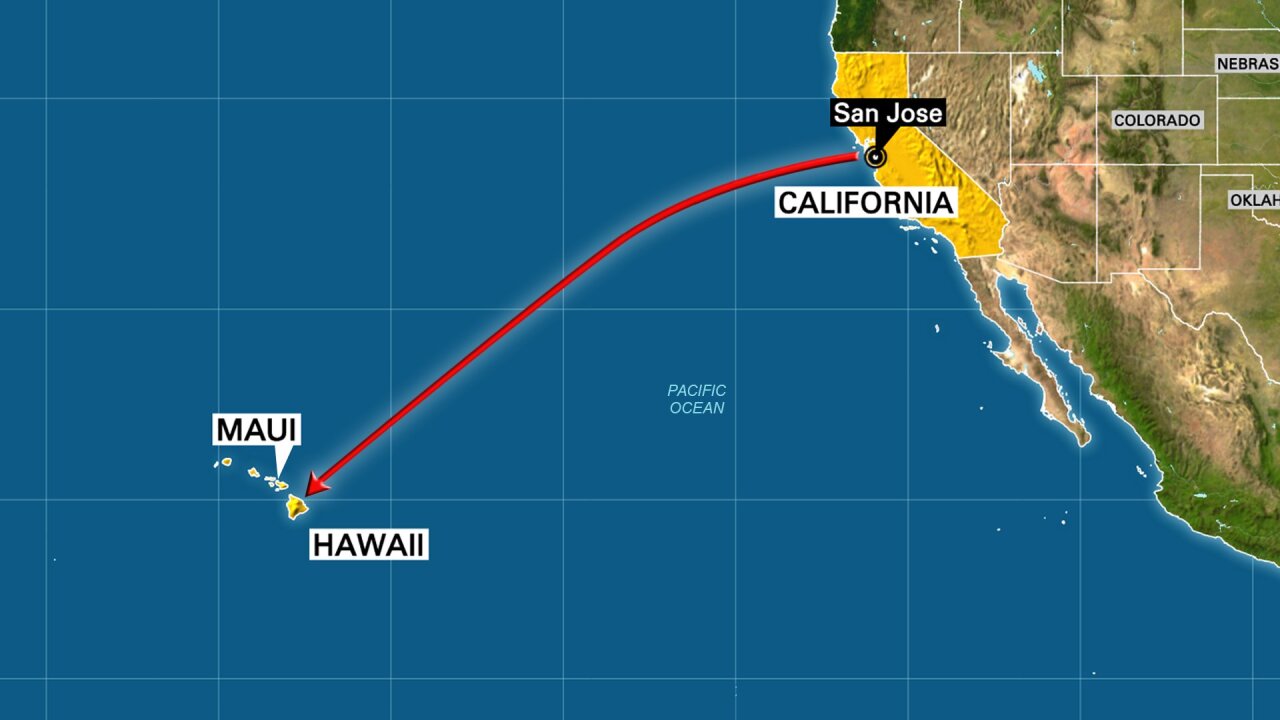 A map showing the west coast of the United States, including Hawaii. Maui and San Jose, California, are highlighted.

(CNN) — News that a 16-year-old boy from California survived a five-hour flight in the wheel well of a Hawaii-bound Boeing 767 has shocked and impressed the world.

Forgetting, for the moment, his ability to slip through numerous security checks, he had to avoid getting crushed by the wheel apparatus as it folded up and down, as well as survive oxygen deprivation and temperatures of below -45 degrees Celsius (-49 degrees Fahrenheit) at altitudes up to 38,000 feet.

Little surprise then that survival rates for this kind of stowaway are pegged at around 24%, according to the Federal Aviation Administration’s Civil Aerospace Medical Institute.

Stowing away is also an illegal act, and of course should never be attempted by anyone. For those that do survive, there’s a risk of brain damage and other health complications as a result of the extreme conditions endured.

But survival has happened — here are some of the more notable examples of the last century.

Note: While the term “stowaway” is defined by Merriam-Webster as “someone who hides on a ship, airplane, etc., in order to travel without paying or being seen,” a couple of our inclusions did not directly hide, but surreptitiously boarded planes.

In 2012, 11-year-old Liam Corcoran, from Manchester, UK, went to extreme measures to escape a shopping trip with his mother.

Having given her the slip in a shopping center, Corcoran headed for Manchester Airport where, without a passport, ticket or boarding pass, he evaded security checks, metal detectors and gate control to board a Jet2 flight bound for Rome.

He was only noticed halfway through the flight and was returned home when the plane flew back to the UK.

In 1985, two young boys from Dublin nearly pulled off the runaway of the century.

Keith Byrne (10) and Noel Murray (13) ran away from their homes in north Dublin and stowed away or hitchhiked on a boat, a bus, a train and a car to get to Heathrow Airport, nearly 600 kilometers (372 miles) away in London.

And that was just the start.

In Heathrow they evaded security and passport checks to board an Air India flight bound for New York.

They were only caught when a wily police officer in JFK International Airport spotted them looking lost and disheveled on a sidewalk.

They eventually confessed and were put on a return flight to Dublin, having spent a free night in a hotel, again courtesy Air India.

In 1928, 19-year-old Clarence Terhune became a sensation in Germany, after stowing away on the return leg of the maiden flight of the Graf Zeppelin, flying from Lakehurst, New Jersey to Friedrichshafen, Germany.

Terhune, a golf caddy from St. Louis, Missouri, who had already established a habit of stowing away on trains and ships and of crashing major sports events, made a bet with his brother-in-law that he could trump all previous stowaways with the Zeppelin.

He snuck aboard while the dirigible was in its hangar and made his big reveal once over the Atlantic Ocean.

Though made to work in the kitchen for the remainder of the journey and arrested on landing, he was hailed as a hero by the German people, sent telegrams, invited to dinners and was even offered a job, it was reported.

In 1996, 23-year-old Pardeep Saini survived a ten-hour-flight from New Delhi to London Heathrow in the wheel well of a British Airways Boeing 747.

Saini’s survival was likely the result of hypoxia combined with hypothermia, essentially putting him into a state of suspended animation, doctors said.

Found wandering the tarmac at Heathrow, Saini said he and his brother had fled India after being accused of having links to Sikh militants.

He described how they’d paid a man for information about how to escape the country by getting into the baggage hold of a plane through the wheel bay.

But there is no access to the baggage hold from the wheel bay, and moments after entering the wheel well the plane took off and he passed out.

His application for asylum was refused.

5. Cuba to Paris, via nosebleed

In 2000, 24-year-old Roberto Viza Egües survived 14 hours as a stowaway inside a cargo container on an Air France flight from Havana, Cuba to Paris.

He was exposed to freezing temperatures and low oxygen levels and a few hours in suffered an extreme nosebleed. When two Parisian grocers to whom the container had been sent discovered him, he was covered in blood.

He’d fled Cuba after fearing his membership of a dissident group was likely to cause him and his family problems.

His request for asylum was denied the same year and he was returned to Cuba.