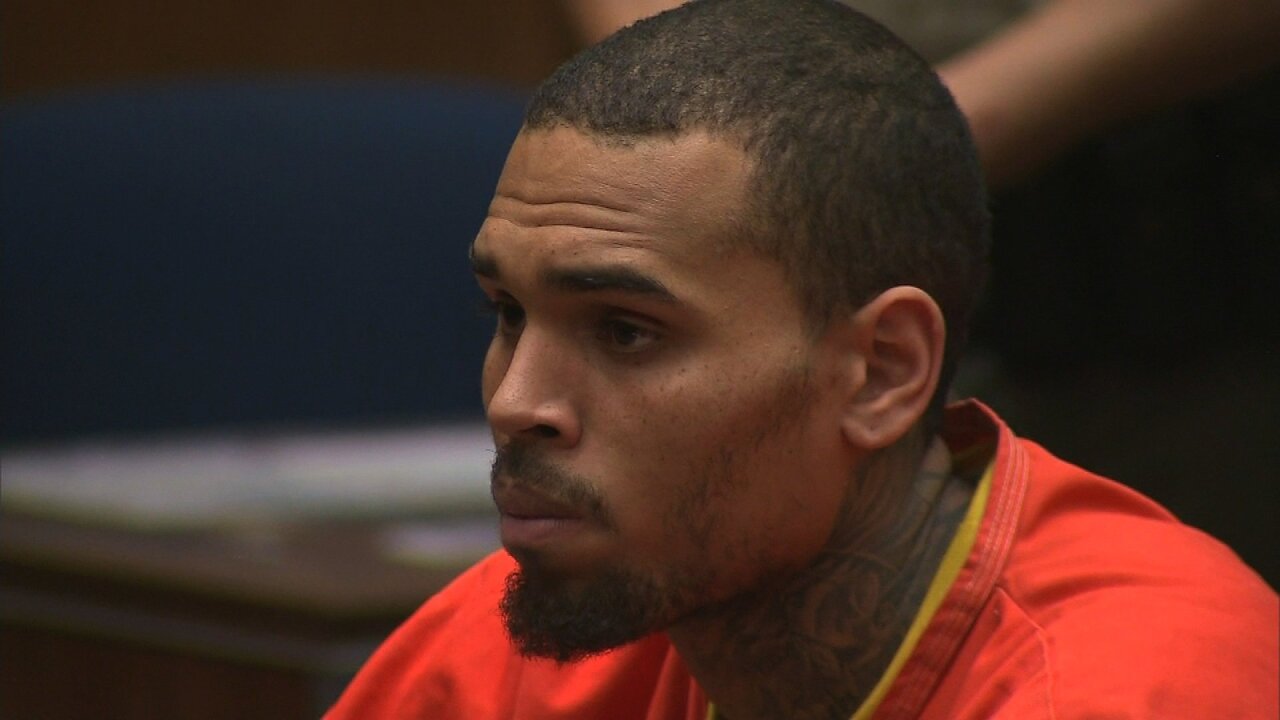 Chris Brown appears in court on Monday, March 17, 2014, after being locked up in jail on a probation violation warrant the previous Friday.

(CNN) — Chris Brown’s bodyguard was found guilty of assaulting a man on a Washington sidewalk, just before the singer’s own trial began Monday.

D.C. Superior Judge Patricia Wynn said Christopher Hollosy was not justified in hitting Parker Adams since there was no evidence he was advancing on the singer as he took photos with a fan.

Wynn, who will also decide Brown’s case, said she believed the testimony of a limousine driver who said Brown hit Adams before Hollosy attacked.

Although Brown faces just a misdemeanor charge, the singer has a lot riding on Monday’s assault trial in Washington.

He could receive probation in the District of Columbia if found guilty, but a Los Angeles judge is waiting on the verdict before deciding whether Brown, 24, will remain jailed in California.

An acquittal would give Brown’s lawyer a chance to argue that he should be allowed to make his own way back to California for a probation hearing. Otherwise, he’ll have to go back the way he came to Washington: on “Con Air,” the federal inmate transport system.

The singer’s trial was set to start immediately after Wynn announced her verdict in last week’s trial of Brown’s bodyguard Hollosy.

Hollosy’s case was tried first so that he could freely testify in his boss’ defense about the sidewalk fight that landed them both in jail in October. He’s expected to say that he landed the punch that broke Adams’ nose and that he did it because it was his job to protect Brown.

Hollosy’s lawyer, Bernard Grimm, argued in the bodyguard’s trial that Adams, 20, was “simply trying to get rich” by accusing Brown and Hollosy of assaulting him.

Howard University student Jalen Garrison testified in the Hollosy trial that she and a friend were posing for photos on the sidewalk with Brown when Adams, who is her boyfriend, tried to snap his own photo with Brown.

Brown got upset, telling Adams, “I don’t like that gay s***,” Garrison testified. Brown lunged at Adams, hitting him the face, she testified.

A limousine driver testified that he witnessed Brown and Hollosy hit Adams. The bodyguard pulled Brown away before throwing his own punch, he said. Adams did not hit back, he said.

When asked to rate the power of Brown’s punch on a scale of one to 10, Adams scored it a six. Hollosy, he testified, packed a 10.

Adams, who said he earns about $200 a day working at a restaurant, acknowledged that he’s suing Brown, potentially seeking millions of dollars for the assault. The lawsuit was filed “because family knew a lawyer in church and that justice should be served,” he testified.

Brown’s mother and aunts, who live in Virginia, along with his girlfriend, Karrueche Tran, and rapper Bow Wow were in court Friday expecting Brown’s trial to start. Wynn delayed it, however, saying she needed more time than expected to decide Hollosy’s case.

Brown’s legal troubles began five years ago when he beat Rihanna as the two were in a rented Lamborghini on a Hollywood street. He pleaded guilty to felony assault in June 2009, which resulted in a sentence of five years of probation and 1,400 hours of community “labor-oriented service.”

Brown voluntarily entered a rehab program a day after being released from a Washington jail in October, but he was kicked out a few days later for “throwing a rock through his mother’s car window” after a family session at the center, a probation report said. Brown was upset because his mother said she wanted him to stay in treatment, the report said.

Brown proceeded “to walk outside and pick up a rock and threw it through his mother’s car window and it shattered,” according to a letter from the rehab center included in the probation report.

His probation was revoked in November, but the judge allowed him to stay out of jail by entering a 90-day anger management and drug rehab program. Although he completed that program last month, the judge ordered him to remain a resident at the Malibu, California, treatment facility until another hearing April 23.

Brown’s probation officer reported at a February hearing that the singer “continues to make great improvement” in dealing with anger, stress and drugs, but the judge decided he could not go free until after his trial for the assault charge in Washington. If he is convicted in that case, the judge would decide at a hearing Wednesday whether Brown should complete his probation in jail.

He was sent to jail on March 14 after he was kicked out of the second rehab program for rules violations.

The judge said he was concerned about a “provocative” statement counselors said Brown wrote on a card at the Malibu rehab center. “I am good at using guns and knives,” according to a document read in court.

The rehab program told Brown to leave because of that statement and two other rules violations, the document said. Brown refused a drug test — which his lawyer denied — and he touched elbows with a female patient, according to the document.