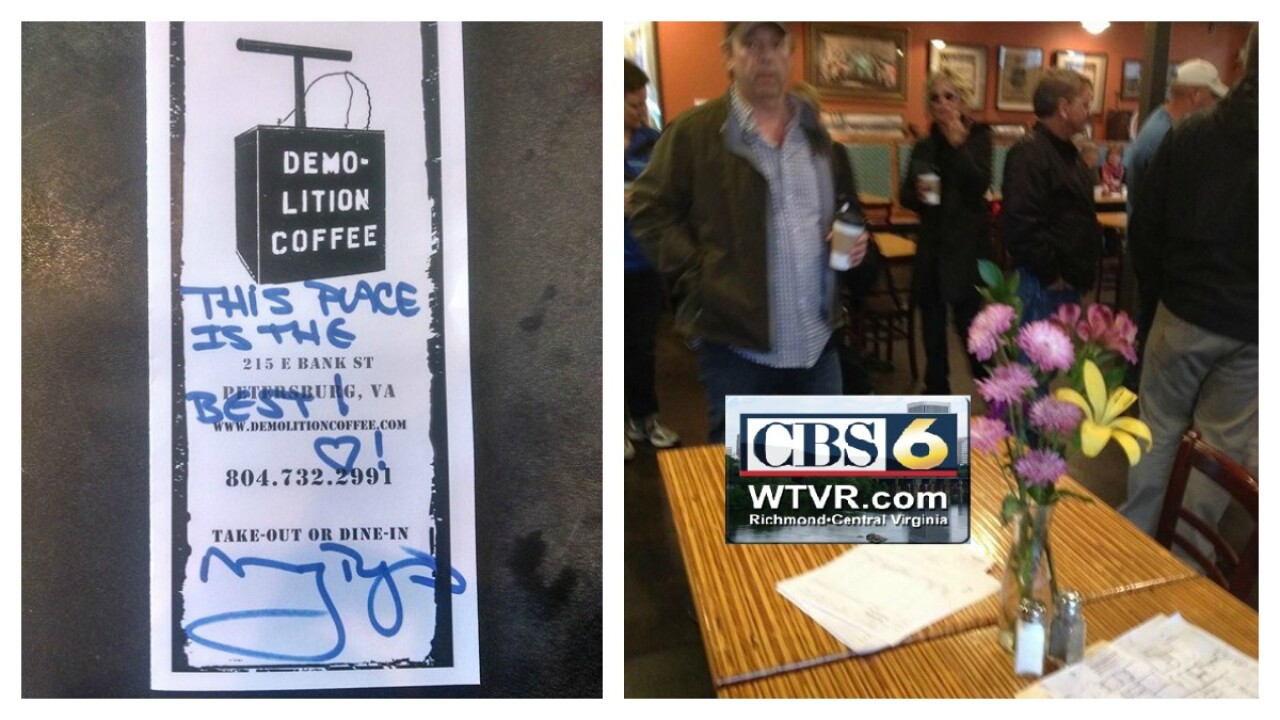 RICHMOND, Va. (WTVR) — Meg Ryan was in town at least since Monday and visited Petersburg with a film crew, according to Demolition Coffee owner Kris Haase.

Haase said that he was one of the few people who spoke with Ryan, who didn’t want a lot of people snapping her photo (noted), and she told him that she was in the area scouting film locations.

She kindly gave Haase an autograph.

No official word on what movie but a little research yielded some likely information.

Ryan will be in the director’s chair for the upcoming film “Ithaca,”which is slated for a 2015 release and is based on “The Human Comedy,” a book written by Pulitizer Prize winning writer William Saroyan.

“It is a coming-of-age story about the exuberance of youth, the sweetness of life, the sting of death and the modesty and sheer goodness that lives in each and every one of us,” according to the IMDB synopsis.

If Virginia is chosen, and IF this is the movie, we can expect to graciously host such stars as Melanie Griffith, Sam Shepard, Lois Robbins, and Jack Quaid.  Perhaps Tom Hanks, who is listed on IMDB as the executive producer for the film, would like to stop by for a visit of Virginia (and take a scooter ride around the city with me?).

Haase said that Ryan’s favorite drink is a soy cappuccino, and that she was with three other people. No word if she loves soy due to a dietary restriction or if it is just a preference. Please someone find out and reassure her that we have some of the best dining/alternative dining available.

Multiple people report seeing her in Carytown today, outside Can Can Brasserie. A waiter at the restaurant, which has hosted many a celebrity with all the films being made here of late, could not confirm that she went inside.

“I should say that I saw her when I was coming out of Can Can and she was standing at the door,” Amy Ernst wrote on Facebook. “I don’t know if they all went in!”

This isn’t the first time the actress has visited. She was with rocker John Mellencamp, who performed at last minute political rally for Vice-President Joe Biden, on Nov. 5, 2012.

We reached out to the Virginia Film Office to confirm any potential partnerships and will post more information as it is made available.

If you want to take a trip on the new Meg Ryan trail, the Demolition Coffee shop is located on East Bank Street in Old Towne Petersburg. Can Can is located in the 3100 block of Cary, in Carytown.

Did anyone else spot her today?