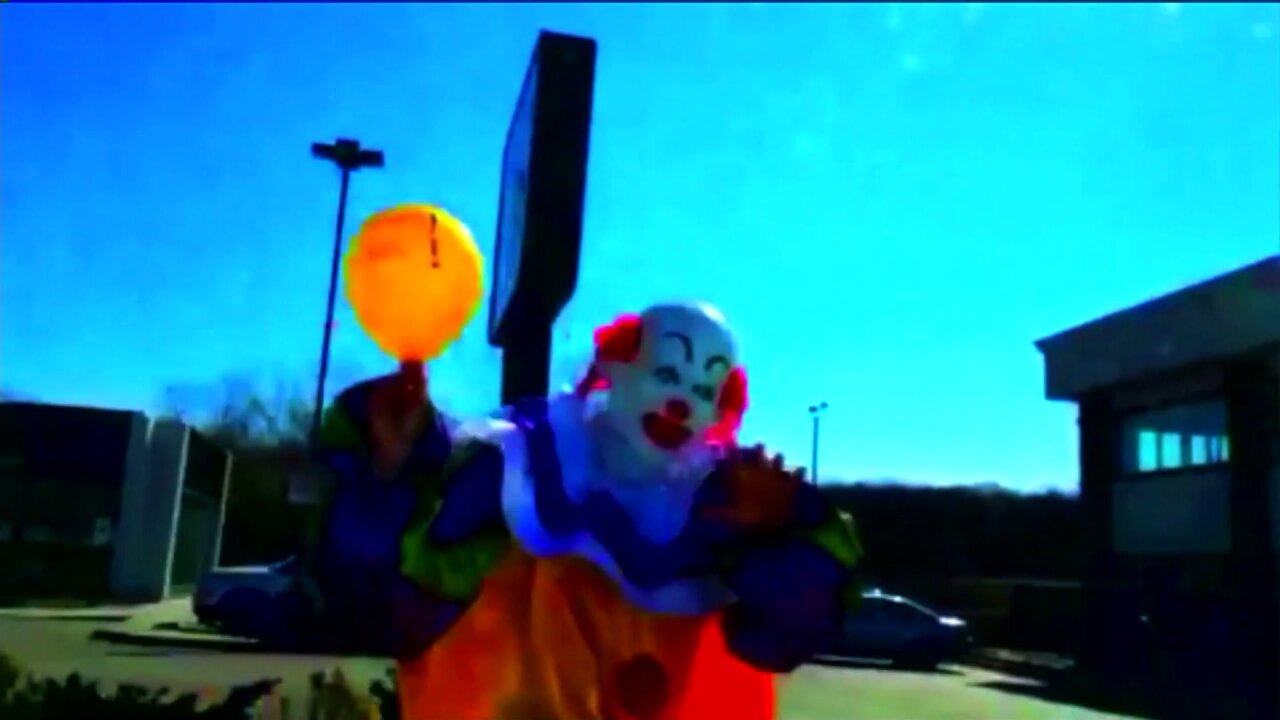 Residents are using social media to post pics and vids of a person dressed in puffy yellow outfit, big red shoes and in full clown-face paint. He or she is always holding balloons and waving at passersby.

Frankie Paterno told WPIX that he spotted the clown Saturday when he was going to his girlfriend’s nephew’s birthday party.  He was at the Grasmere train station when he looked out the window and saw the clown, which he mistakenly thought might be part of his nephew’s clown-themed celebration.

“He was just standing there with balloons,” Paterno said. “And he started waving, and I was like, ‘Is he supposed to be here?’ And they’re like, ‘No.’”

Comedian Vic Dibitetto said he was driving when he captured eerie video of the clown.

“Driving by I see this guy on the side of the road dressed in a clown outfit – and a scary one no less,” Dibitetto said. “And it’s freaking people out in Staten Island.”

An Instagram user caught the clown hanging out in the darkness next to a detour sign, and wrote “Is this the same clown you saw?  I just got freaked out coming home from the studio in Tottenville. [Click to read more on this story from WPIX in New York.]

Holy crap @bobbypriv is this the same clown you saw? I just got freaked out coming home from the studio in Tottenville #weirdo #retards #detourillnevertake #pennywise #it #bozo #doinktheclown?

However, the clown may be part of an elaborate publicity stunt. Published reports indicate the people who posted the photos and videos might all have been in on the joke, according to WCBS.

In fact, The Staten Island Advance reported that the only people who posted images of the clown are Facebook friends and are associated linked with Staten Island-based Fuzz on the Lens Productions. Additionally, the newspaper reported Dibitetto is associated with the company.

The clown resembled Pennywise from the 1990 horror miniseries based on Stephen King’s novel. [Click to read more on this story from WCBS in New York.]