Last time we debunked the Henrico UFO, but can you debunk this one? 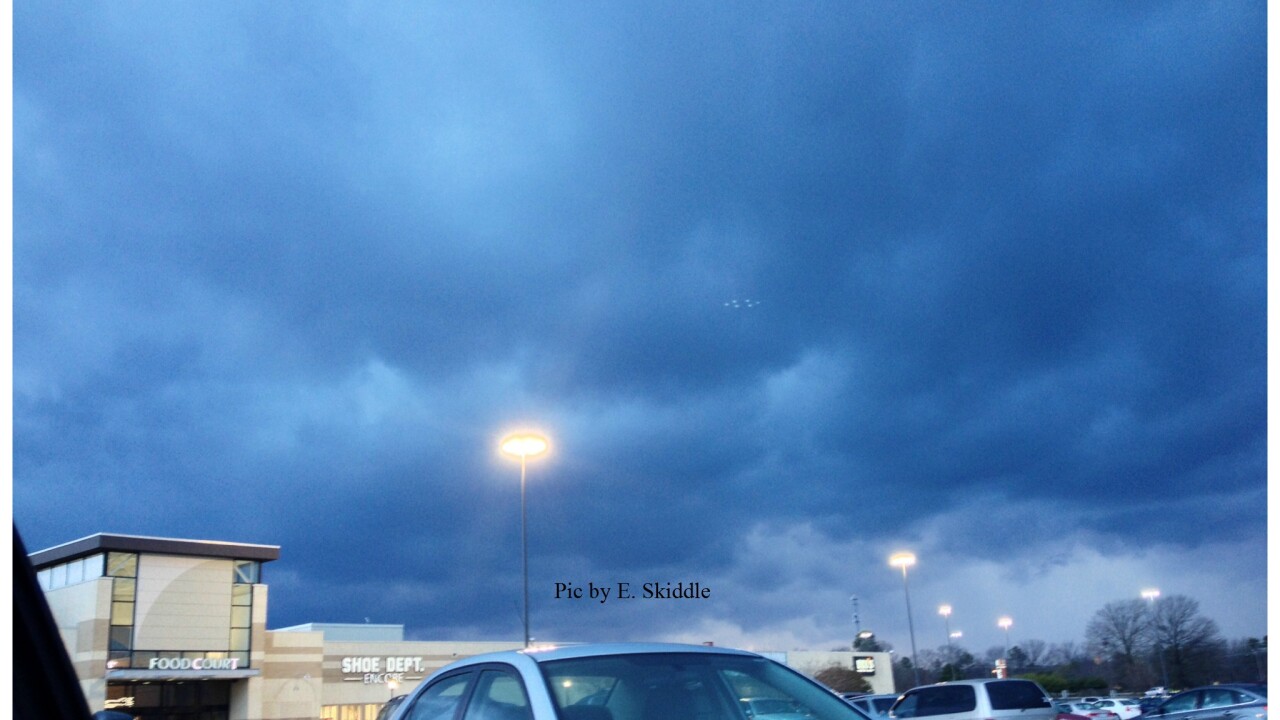 Sceond copy of UFO pic by E. Skiddle. (not original so that we could put a mark on it)

CBS 6 was contacted via email and Twitter about a photo snapped Thursday at Southpark Mall, that allegedly captured a UFO in the clouds.

Erica Skiddle said was with her mother and sister tonight at the Southpark Mall. They were leaving a department store and exited around 6:30 p.m. to a "weird and ominous" sky.

"My mom and I took several pictures of the sky and while we began looking through our pictures, I noticed in one of mine that there was something," Skiddle wrote via email.  "I had no flash in, nor a filter."

"And my mom looked through hers and also saw she had whatever it was in one of hers," she added.

CLICK TO ENLARGE. Second copy of UFO pic by E. Skiddle. (not original so that we could put a mark on it)

Erica described what she and her mom saw in the pictures  as looking "...like there are six little lights, in like a hexagon, I don't know, it just looks weird."

According to the National UFO Reporting Center, for as long as they have been keeping records, 1,490 UFOs have been reported in the grand state of Old Virginny.

A UFO hasn't been reported in the state since February 27, 2014. That one was reported as a triangle shape, seen in Kilmarnock.

Well, speaking of skeptics, we occasionally get the call to investigate a UFO. Like last time, when a viewer thought maybe we caught one on film while we were recording near a landfill.

I solved that mystery. I was able to identify our flying object as a plane captured while using a show shutter speed.

This is one is a little harder to disprove, that's why we are calling for your input.

Curious if the photo was a fake, I used the web application FotoForensic to examine details of the picture. You can tell a lot about a picture using that. For example, here's a picture of my dog.

It helps you see significant differences, and identifies suspicious areas that may have been digitally altered. You can read the details on it here.

The ELA appears to check out fine on the original image sent to me by Erika. It doesn't appear that anything was added to the picture, and yet the picture still shows the odd light formation in the sky.

I also checked the metadata of the photo.

It confirms that the picture was taken today, with an iPhone.

You can see the complete metadata profile here.

We haven't solved any mystery though, just confirmed the original picture seems to check out, based on free software analysis (we definitely aren't experts on that).

There is a really good chance the photo could be a reflection from light post. That would wrap things up nicely.

Erica said though that she doesn't think that resolves it.

"Yes I took the picture from the car, and no because my window was rolled down," she said.

Twitter user @AyeJimboSlice thinks the truth is out there and that the six light pattern is nothing more than a reflection. He pointed out this picture after we published.

@CBS6 my two pictures of the light pole in colonial heights pic.twitter.com/WzZ0JoArMj

Did anyone else see any of these lights? I reached out to a friend who works there and they didn't have anything to report.

I asked Erica if she believed in UFOs before spotting this.

While there are different thoughts on what it is, one professional photographer believes it’s simply a reflection of the parking lot lights at the mall, bouncing off the plastic cover over the iPhone camera.

Tell us in the comments what you think it is.