Putin: Russia has no plans to annex Ukraine’s Crimea region 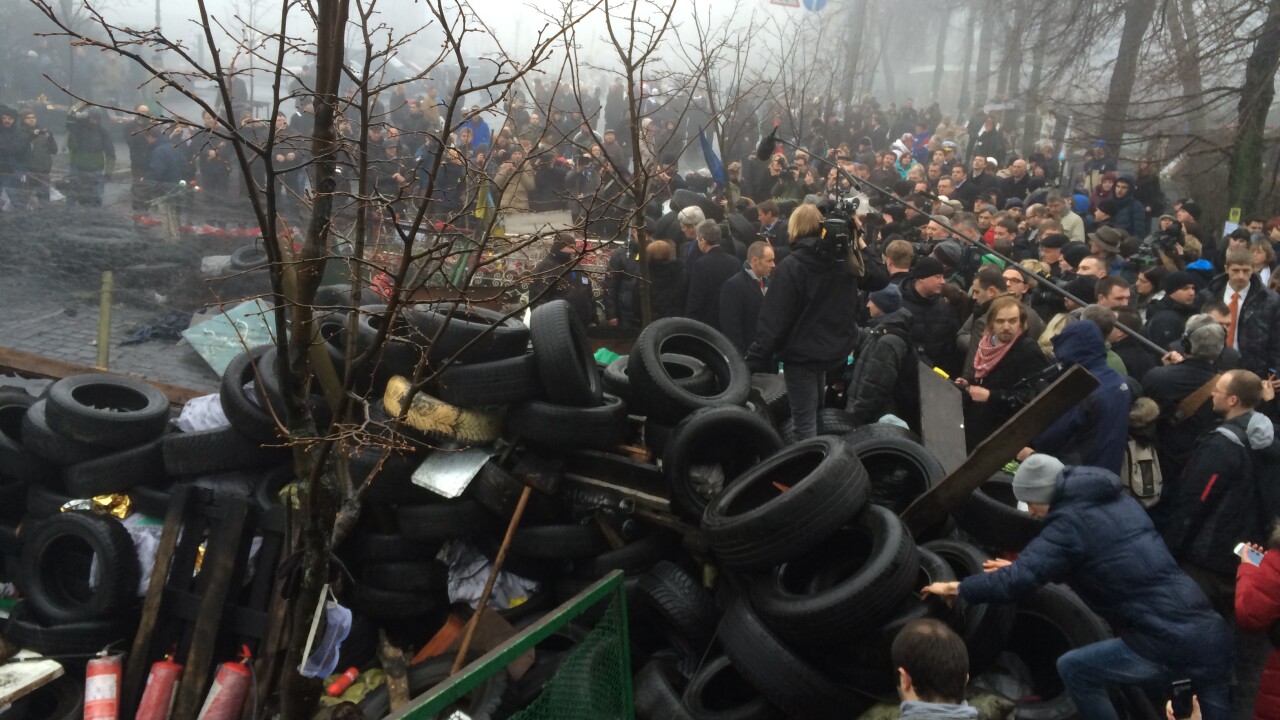 US. Sec of State Kerry visits Kiev and the memorial site.

SIMFEROPOL, Ukraine (CNN) — Russia does not want to take over Ukraine’s Crimea region, President Vladimir Putin said Tuesday, but he showed no signs of backing down over Russia’s right to intervene despite Western pressure.

In defiant words, he said what had happened in Ukraine was an “anti-constitutional coup and armed seizure of power,” and insisted that ousted Ukrainian President Viktor Yanukovych is the legitimate leader of the nation.

He also insisted that if Russian-speaking citizens in the east of Ukraine ask for Russia’s help, Russia has the right “to take all measures to protect the rights of those people.”

The parliament in Ukraine is “partly legitimate,” he said, but the country’s acting President is not.

Appearing at ease as he addressed a handful of reporters in Moscow, Putin said only the people of Crimea, a Russian-dominated autonomous region, could determine their future.

He also continued to deny that Russian forces were in the country, saying that the troops currently blockading Ukrainian forces in their bases and controlling key institutions were local “self-defense teams.”

The troops in question — who appeared in Crimea late last week — are wearing uniforms without identifying insignia. But some have told CNN teams on the ground that they are indeed from Russia, and they are making use of military vehicles with Russian registration plates.

Putin said that there had been no need for the use of Russia’s military so far, with not a shot fired, and that any use of military force would be the last resort. He repeatedly cast any such intervention as a humanitarian mission.

Military action, he said, would be “completely legitimate” because it was at the request of Yanukovych and in line with Russia’s duty to protect people with historic ties to Russia, both cultural and economic.

“Firstly, we have a request of the legitimate President Yanukovych to protect the welfare of the local population. We have neo-Nazis and Nazis and anti-Semites in parts of Ukraine, including Kiev,” Putin said.

At the same time as he appeared to use that request to justify a Russian intervention, Putin said he saw no political future for Yanukovych, who resurfaced in Russia last week after fleeing Kiev 10 days ago.

The Russian President also pointed out what he sees as a double standard by leaders in the United States and other Western countries, saying that the U.S. acted in Afghanistan, Iraq and Libya without a U.N. resolution authorizing that action or by “twisting” U.N. resolutions.

And he warned that any damage from sanctions imposed by the West against Russia over its actions in Ukraine would be multilateral.

Shortly after Putin’s remarks, U.S. Secretary of State John Kerry arrived in Kiev, bearing offers of much needed financial help and showing his support for the fledgling Ukrainian government.

His first stop was a somber one: Paying respects to the dozens killed in bloody clashes between security forces and protesters in Kiev at a makeshift shrine in the capital, piled high with flowers.

A team from the International Monetary Fund is also expected in Kiev on Tuesday to begin a fact-finding mission that will look at possible financial help and necessary reforms.

The White House said the United States would give Ukraine a $1 billion loan guarantee to help insulate the Ukrainian economy from the effects of reduced energy subsidies from Russia. The loan guarantee will help Ukraine move forward with an IMF assistance package, which calls for it to raise energy prices.

The Ukrainian parliament ratified an agreement Tuesday to receive loans from the European Union worth 610 million euros, the equivalent of nearly $839 million. The parliament is based in Kiev, where many emphasize ties to the West, as opposed to people in eastern Ukraine, where loyalty to Russia runs deep.

Meanwhile, Turkey’s military scrambled eight F-16 fighter jets for “control and prevention measures” after a Russian surveillance plane “flew parallel along our Black Sea coast in international airspace,” according to a Turkish military website. There has been no immediate comment on this from Russia.

And in Brussels, Belgium, NATO said its representatives would meet with Russian officials Wednesday. That announcement came as NATO allies huddled in emergency talks requested by Poland, which considers itself to be under threat by the drama in neighboring Ukraine.

NATO spokeswoman Oana Lungescu said the allies were united in solidarity with Poland. “Obviously, this is a crisis which is very serious. It has an impact, not just on Ukraine, and Ukraine’s sovereignty and territorial integrity, but also on instability in the whole region,” she said.

Russia declined an invitation to hold diplomatic talks with Ukraine’s government, a senior U.S. administration official told CNN on Tuesday. Russia had been invited to a Wednesday meeting in Paris of signatory countries to the 1994 Budapest Memorandum, a pact of security assurances signed by the United States, United Kingdom, Ukraine and Russia.

However, Cabinet ministers from Ukraine and Russia have started inter-government consultations, Yatsenyuk said live on Ukraine’s Parliament TV on Tuesday. The talks are going “rather slowly,” he said. It’s not immediately clear where the talks are happening.

Former U.S. Secretary of State Madeleine Albright told CNN’s “New Day” that she did not believe Putin’s claims that he was protecting endangered Russian citizens.

“There is not this kind of a crisis in terms of the way that the Russian-speaking people are in some way being harmed. So this is all made up,” she said.

“I think it’s part of a much longer-term plan that Putin has had, which is to try to re-create some form of relationship between Ukraine and Moscow. I think that is the tragedy that’s going on. Putin is in many ways, I think, delusional about it.”

Earlier Tuesday, about 150,000 Russian troops taking part in military exercises near the Ukrainian border were ordered back to their bases, but thousands of others remain in control of much of Crimea.

Putin ordered the troops’ return after six days of snap exercises at Ukraine’s doorstep. He said the exercises, which began Wednesday, were long planned and had nothing to do with events in Ukraine.

But Ukraine’s new interim authorities are far from reassured.

Andriy Parubiy, head of Ukraine’s National Security and Defense Council, told parliament that Ukraine has doubled its security presence at checkpoints on the northeastern and eastern borders of the country to prevent any incursions by Russian “extremists.”

At this stage, Ukraine border security officials are not seeing any cross-border activity, he said.

Sergey Astahov, assistant to the head of the Ukraine Security Border Service, earlier told CNN that Russian troops and vehicles remained near the country’s eastern border with Russia.

Meanwhile, an eerie standoff continued in Crimea, with no shots fired in anger on either side but tensions high.

The crisis has divided many in the majority ethnic Russian region, which hosts a major Russian naval base in the port of Sevastopol.

At least 700 Ukrainian soldiers and officers defected Tuesday, announcing their readiness to defend the population of Crimea, RIA Novosti said, citing a spokesman for the newly installed Crimean authority.

But Ukraine’s Defense Ministry dismissed the claim as “untruthful information.”

Parubiy said personnel at all of Ukraine’s border security points in Crimea are being subjected to “psychological attacks” by 100 armed men. He did not identify who these armed men are.

The government is sending food, water and other essentials to the military bases currently blockaded by Russian forces, he added.

Anxieties have been heightened by a confrontation between Ukrainian soldiers and Russian forces at Belbek Air Base, near Sevastopol.

Russian forces are seen firing shots into the air, warning unarmed Ukrainian soldiers from approaching them.

The commander of the Belbek base, Yuli Mamchun, told CNN his forces had received a demand to put down their weapons by noon local time. They refused to comply, he said, adding that it was the latest in long line of demands.

A wider ultimatum for Ukrainian forces to surrender to the Russian forces early Tuesday also passed without incident.

Earlier, Vladislav Seleznyov, head of the Ukrainian Defense Ministry press office in Crimea, told CNN it had been largely quiet in Crimea overnight.

A group of pro-Russian Cossacks in civilian dress attempted to attack the Ukrainian naval headquarters in Sevastopol, Seleznyov said, but Ukrainian forces repelled the attack and no shots were fired.

On Monday evening, Russian troops also moved into the Russian side of a narrow sea channel dividing Russia and Crimea, opposite the Ukrainian city of Kerch, he added.

The military maneuvers are not just on land.

The flagship of the Ukrainian navy’s Black Sea Fleet, the frigate Hetman Saraidachny, is headed back to the Black Sea via the Bosporus, the Ukrainian Consulate in Istanbul said.

Earlier Tuesday, two Russian warships steamed up the Bosporus toward the Black Sea.

At an emergency U.N. Security Council meeting Monday to discuss the unfolding crisis, Ukraine’s envoy asked for help, saying that Russia had used planes, boats and helicopters to flood the Crimean Peninsula with 16,000 troops in the past week.

“So far, Ukrainian armed forces have exercised restraint and refrained from active resistance to the aggression, but they are in full operational readiness,” Ukrainian Ambassador Yuriy Sergeyev said.

However, Russian Ambassador Vitaly Churkin insisted his country’s aims were preserving democracy, protecting millions of Russians in Ukraine and stopping radical extremists. He read a letter from Yanukovych at the U.N. meeting, describing Ukraine as a country “on the brink of civil war,” plagued by “chaos and anarchy.”

U.S. Ambassador Samantha Power said Russia’s claims about the situation in Ukraine are untrue and warned that sending military forces “could be devastating.”

U.S. President Barack Obama said the United States is examining a series of economic and diplomatic steps to “isolate Russia,” and he called on Congress to work with his administration on an economic assistance package for Ukraine.