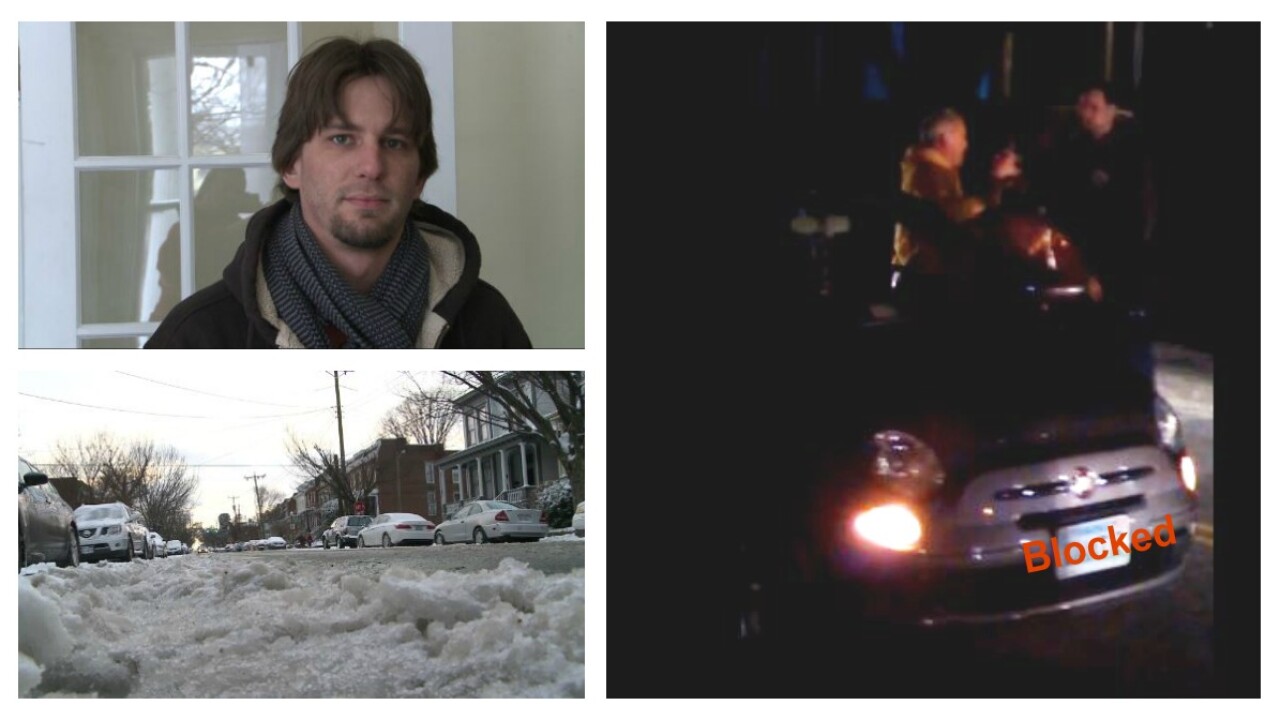 RICHMOND, Va. (WTVR) - Witnesses who shot cell phone video in Church Hill Sunday morning claim the driver of a vehicle that almost hit them is the daughter of a local police officer, and that she was drunk.

The person recording video claims the driver nearly hit several people and cars after blowing through two stop signs. He said based on what was said at the scene, the driver of the vehicle appears to be the daughter of a local police officer.

CBS 6 spoke with S. Preston Duncan, whose roommate filmed the incident. He said that around 12:30 a.m. Sunday, a drunk driver hit a vehicle in the 3000 block of Broad Street.

In response to the commotion, several Church Hill residents ran outside. Duncan's parked car was hit in that accident.

At that point another vehicle approached and appeared to be speeding.

Duncan said that the car blew through the stop sign "without decelerating, and we were forced to flee the street towards the sidewalk as we realized that this was not another cop rushing to the scene, but a driver who has clearly failed to notice a stop sign, an automobile accident, and flashing police lights, and is headed straight for a head on collision with the wrecked SUV."

"The oncoming vehicle slammed on its brakes, swerved around the damaged vehicles, nearly hitting the cop car (lights still blaring), and is forced to a stop, right where we had all been standing, by one of the officers tending to the accident," Duncan wrote in a post that has been shared on the Richmond Police Department's Facebook page.

"She was crying hysterically, hitting her head on the steering wheel,” said Duncan. “At one point she got out of the car and spilled the entire contents of her purse on the street. The officer repeatedly asked her to get back into her car."

Duncan said that at least two witnesses heard the officer consent to speak with the girl's father on her cellphone, at which point she made a call and handed it to him.

Then approximately 30 minutes later witnesses said that a SUV arrived on scene, with a man and a woman inside.

"Cut the camera off, son," the man in a yellow hooded sweatshirt said to the person holding the cell phone.

Witnesses said the girl was never given a breathalyzer.

You can see much of this happening in the video.

In the video, it's muffled, but you hear the man in the yellow hooded sweatshirt apparently saying "shut your mouth right now."

And while walking away, the young woman said "I teach two year olds," to which that man responds, “Then stop acting like one!”

The driver of the car got into the SUV and the woman drove the car off, witnesses said.

Police sources did confirm with CBS 6 that the man seen in the yellow hoodie is not a Richmond Police officer.

CBS 6 legal expert Todd Stone said it's too late for any DUI-related charge, but he added the woman could still be charged with reckless driving or failing to stop at a stop sign.

The video has caught the attention of area police.

"In reference to cell phone video of part of an incident that occurred this weekend in Church Hill, the Richmond Police Department would like the public to know that Internal Affairs detectives are aware of the incident and are investigating to determine exactly what happened," officers wrote.